Bracing for yet another bone chilling winter storm, dreams of languishing on a white sandy beach soaking up the warm Caribbean sun are never far from my winter-weary mind.

And now a new dream vacation spot may open up… and its no dream.

Let’s raise a Cuba Libre in praise of normalizing relations between Cuba and the US.

Over half a century of waiting, my long-delayed Havana holiday might actually happen.

Despite the all too predictable political backlash  and initial outrage by some Republicans about this development which now feels overblown and as wildly outdated as the vintage Chevy’s that fill Havanas streets, the first commercial U.S. flight to Cuba since 1961 has just taken off. 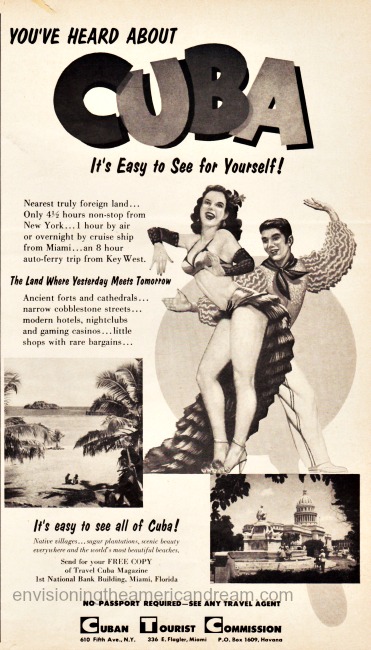 The frozen-in-time feeling in Cuba fits perfectly with childhood memories of stories shared by my parents of their mid-century Havana holidays.

Dinner time in the suburbs sometimes took on a fiesta feeling when my parents wanted to reminisce about their travels.

Over a festive dinner of arroz con pollo – a dish first enjoyed by Mom in Havana and now in the suburbs  made the authentic Ladies Home Journal way with a can of Hunt’s tomato sauce and EZ Minute Rice – Mom and Dad would regale us with their adventures in Cuba, casting a spell as intoxicating as the island itself.

The glitter and glamor of pre-revolution Cuba, that tropical Technicolor paradise of palm fronds and turquoise water, a sultry cocktail of casinos, corruption and the Caribbean Sea would fill their Kodacolor memories for decades …and fuel mine.

But New Years 1959 shattered any hopes of my own Cuban getaway. Along with ringing in the New Year with Guy Lombardo, Fidel Castro took over Cuba forever shuttering this Garden of Eden to American revelers.

Any dreams of rum-soaked nights dancing the rumba till dawn would have to marinate for well over 50 years.

For the  balance of my childhood, Cuba remained a mysterious and forbidden place; the romance and allure of pre-Castro Cuba now melded with a menacing bearded man, the specter of Communism looming so close to our borders  became a hot button issue in the cold war.

My parents had a romanticized sense of Cuba, and for good reason. It was after all where they had honeymooned in 1950.

As the years passed, the paradise would almost grow lusher, conjured by an imagination infused with nostalgia.

Did my PTA Mom and Republican Dad really linger an entire afternoon at La Floridita nursing daiquiris poured by highly skilled cantineros in the hopes of catching a glimpse of Ernest Hemingway at his favorite watering hole, which in their multiple tellings they had. 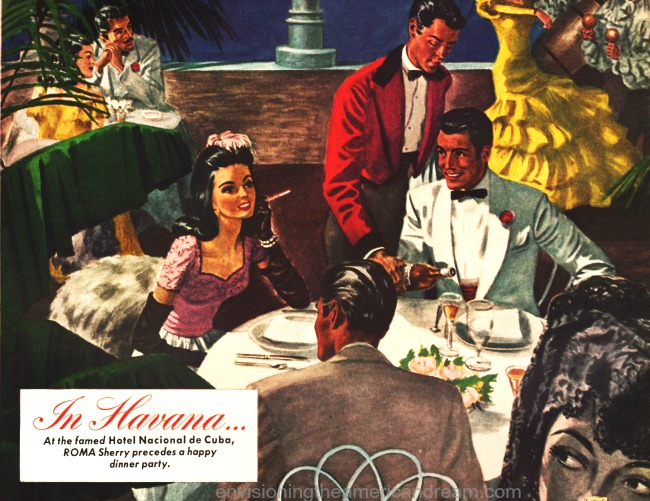 Like so many they were drawn to the fiesta that was Havana, the most exciting city in the Western hemisphere, the Caribbean playground to American socialites, politicians and movie stars.

Of course  the Honeymooners stayed at the world-renowned Hotel Nacional de Cuba , the iconic hotel filled with flowering gardens, sumptuous sun clubs and swimming pools where these newlyweds from NY could rendezvous with the smart Cosmopolitan set. 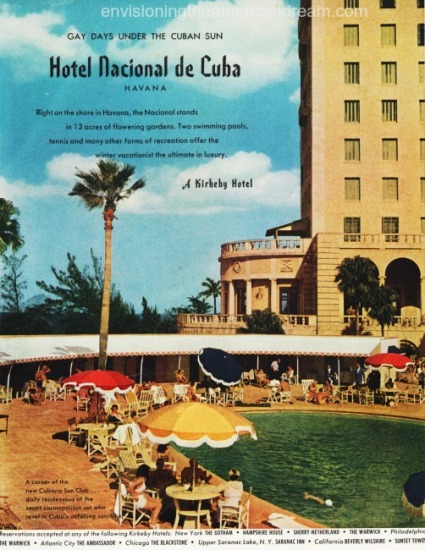 Gay Days in the Cuban Sun .The iconic hotel with its eclectic architectural style blending Art deco, Moorish with Spanish colonial was built in 1930 through an agreement with Cuba and US backed banks. Vintage ad Hotel de National Cuba 1947

This was the very same hotel that only 4 years earlier had turned my father away, during a winter school break.

It seems Lucky Luciano beat him to it, booking the entire hotel that Christmas week of 1946 for a big mafia summit at which the carving up of Havana among the crime families was on the agenda.

Undeterred, Dad found refuge in a little hotel on Obispo Street The Ambos Mundos Hotel, a place that Hemingway himself had stayed in during the 1930s

For a war-weary soldier 6 months out of the service and a few months into law school, Cuba with its tropical beauty and tropical beauties beckoned him.

The streets of Old Havana, pulsating with African and Caribbean rhythms, were lined with architectural marvels of Spanish colonial architecture evoking tales of Cuba’s colonial past

A tourism magazine had described Havana as, “a mistress of pleasure, the lush and opulent goddess of delights.” It didn’t disappoint.

Havana was a paradise living up to its reputation as a tropical playground, a blend of glittering nightclubs, outrageous cabarets, all night bars with exotic drinks and backstreet brothels. 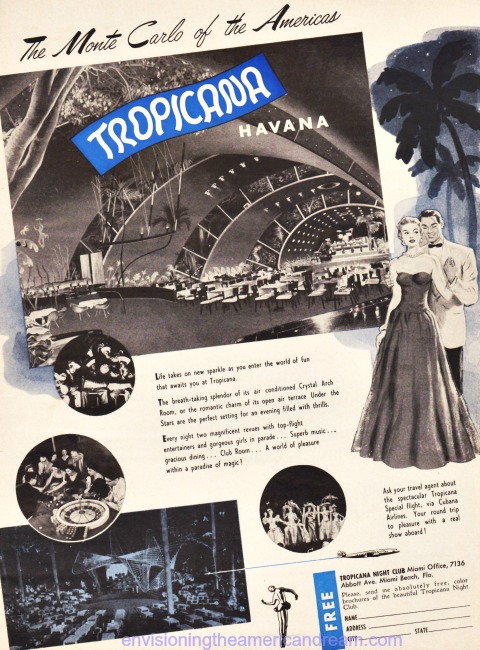 But the best stories were about the mythic Tropicana nightclub, the brightest jewel in Cuban nightlife.

“Havana’s glamorous Tropicana,” Dad never failed to point out between bites of Mom’s take-a-can-and-take it-easy arroz con pollo, “bore no resemblance to the one portrayed on TV!”

As much as Mom loved Lucy she would always smirk at the fictional Tropicana Club run by Lucy’s bandleader husband Ricky Ricardo ( famously played by Cuban Desi Arnez) a sanitized version of the sizzling club in Havana.

Billed as “a world of pleasure within a paradise of Magic,” the Tropicana, set in bucolic surroundings was a lush paradise of rumba and roulette, dazzling lights and equally dazzling “goddesses of the flesh” as the scantily clad showgirls were called, who pranced on catwalks set among tall royal palms rising above the tables through the roof.

Tropicana in the Sky

Taking off every Thursday from Miami International Airport , the flying party sets its happier patrons down in the balmy air of the land of daiquiris and sex at Havana’s Aeropuerto Jose Martin an hour later In between you are treated to excellent drinks, top-notch Latin Music and a floor show. Brainchild of Antonio Mintero, the promotional manager of Cubana Airlines, the flying saloon took 2 months to prepare before it was unveiled in 1956. Operated in a package deal with the fabulous Tropicana night club, revelers who want to try the thrills of a night spot in the air pay $68 for a ticket. Vintage ad 1957

Heralded as a “paradise under the stars” my parents took the nightclub’s slogan literally.

In 1958 they booked a flight on the famous Tropicana Special the first flight in the world with a live show aboard.

Offered by Cubana Airlines, the extravaganza was billed as The Greatest Show on Air!

“Treat yourself to an evening beyond your fanciest dreams Havanas Tropicana “The Monte Carlo of the Americas. Flying from Miami to Havana the 1 hour flight had a live show featuring Mambo, Rhumba, Cha Cha Cha and drinks on top of the clouds.”

Why wait until you got to sunny Havana to start the fiesta?

Whisking patrons 10,000 feet into the air, plying them with unlimited pink daiquiris and vibrating music  it wasn’t long before Conga lines of passengers and performers would be snaking down the aisles in the plane,  as the diamond chain of lights that were the Florida Keys move slowly behind.

Complete with miniature stage installed at the front of the cabin, decorated with a glowing arch like that at the Tropicana night club, musicians decked out in fiesta outfits played sizzling music on the piano trumpet, maracas and bongos.
Cha cha Cha’ing up and down the aisles were 2 saucy performers from the club, Gloria and Rolando encouraging passenger to sing along supplying them with Spanish lyrics printed on a card.

”As the torrid Cuban music poured over you would lose consciousness of the plane and its 4 huge engines and that 1 hour flight would fly by literally!” Dad would remember.

Breezing through the airport  in Havana  since Americans didn’t have to bother with customs thanks to a special arrangement through the airline and the Tropicana,  they were whisked to the real Tropicana Night Club, put up at the Hotel de Nacional for a few winks and flown back to Miami the next day with a complementary champagne toast.

Only 4/1/2 hours non stop from NY by air from Miami, American tourists flocked to Cuba in the winter. With the advent of cheap flights and hotels deals, the once exclusive hotspot became accessible to American masses.”Blend the glitter of Miami Beach with the romance and chance of the Riviera, spice of the West Indies and the rhythm of Havana.” vintage travel ads National Airlines

The best part was, this paradise was only 90 miles from Miami, my parents would remember wistfully.

For Whom the Bell Tolls

The proximity of Cuba being so close to Florida would take on a very different meaning especially in October 1962 with the Cuban Missile Crisis .

But while tourists eagerly spun the roulette wheel in sexy Havana, a revolution brewed in the less glamorous countryside.

This playground to American’s was abruptly shut down when Fidel Castro took over. The Tropicana that had opened to such fanfare on New Years Eve 1939, would close on another New Years Eve twenty years later, one which would ring the death knell of Cuba. Cuban revolution brought the curtain down on that era.

Soon the proximity of Cuba being so close to Florida would take on a very different meaning to me especially in October 1962 when Armageddon was narrowly avoided.

After that it was as if Moms famous arroz con pollo was seasoned with communism and its Spanish origins were emphasized as the chilly cold war came closer to home.

The Measles Crisis of October