Job Security a Thing of the Past -Vanishing America 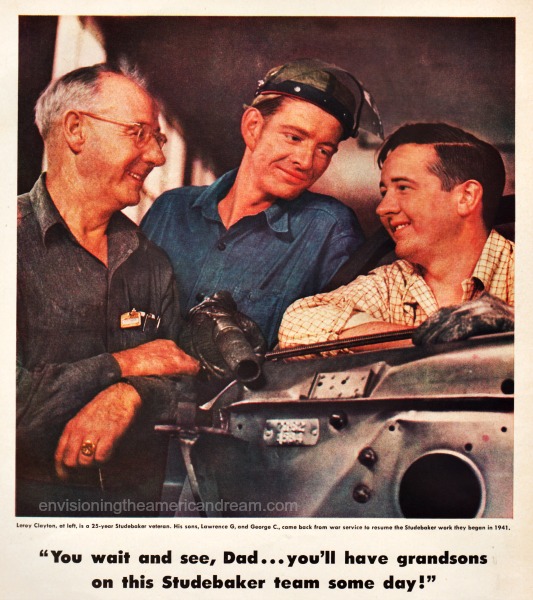 Entering an established company was once a guarantee of a sweet salary and job security but such assurances are quickly becoming a thing of the past.

Job security in a big manufacturing plant has gone the way of the tailed fin automobile. Today both are quaint notions, remnants of that mythological American dream past.

The promises offered by  manufacturing was always a secure path to the American Dream. Employed by an established company was a guarantee that there would be a life time of security.

Once upon a time a job with a company was a thing for life, often handed down from father to son like a treasured gold watch.

No company represented  that idea more than Studebaker, a once upon a time solid name in the automotive business, who prided themselves on hiring generations  from the same family.

Beginning in the 1920’s, generations of  men in family after family of Studebaker’s home community of South Bend, Indiana followed their fathers and even grandfathers into jobs at the Studebaker plant.

During WWII while sons went off to war, their fathers stayed in South Bend manufacturing Wright Cyclone engines for the Boeing Flying Fortress. Vintage ads 1944 Studebaker

During WWII when sons left to go overseas to fight, they could be assured that they had a job waiting for them back the Studebaker plant once they returned.

Tom Hinkle’s boys are stationed overseas,” begins this 1944 WWII ad. “There’s a link that spans those distant spots. For over 92 years the tradition of fine craftsmanship has been fostered in many families like the Hinkle family in Studebaker’s home community.

Three generations of the Clayton family could always count on job security. Now, the average employee tenure is under 5 years and for millennials it’s under 3 years. Vintage ad 1949 Studebaker

Proud of their enviable reputation, Studebaker ran a series of  post war ads highlighting their employees as solid citizens, fine family men who enjoyed lifetime careers passed down from generation to generation,  an unbroken line of fine craftsmen which gave their product trustworthy quality.

In one folksy Studebaker ad from 1949 we see Father and son talking. Jr. says “You wait and see Dad…you’ll have grandsons on this Studebaker team some day!”

Young George Clayton works the same way he talks – with tremendous pride in being a Studebaker craftsman.

Just watch him or his brother Lawrence do a job of metal finishing would make you want to buy a Studebaker.

The Claytons and the thousands of other solid citizens who man the Studebaker production line uphold that reputation today.

The days when blue color work could be passed down the family line – those days are over.

Workers who built things were once the heart of our economy. Workers prided on themselves craftsmanship and happily passed on these skills from father to son.

On the back of this industrial output rose America’s middle class. High paying manufacturing jobs in turn helped spur a robust and growing economy that depended little on foreign nations for manufactured goods.

In the 1948 ad above, we read  that Russell Shindollar learns  plenty about Studebaker craftsmanship from his Dad.

Almost everyone who drives an automobile has heard about Studebaker famous Father – son teams.

They’re such a common sight in virtually every Studebaker department it’s no trick to find  pair to photograph.

What this illustration emphasizes, though, is the intent interest of the younger man in the precision technique of his father.

This reflects the deep-rooted and wholesome respect for top quality craftsmanship that you notice everywhere you turn in the busy Studebaker plants.

Many people who’ve bought Studebakers recently will tell you frankly that they did so because they had read and heard so much about the Studebaker working force.

This working force rates tops in esteem of thousands of value minded car buyers because the men who man it make lifetime careers of their jobs.

They’re true craftsmen. Each of them feels in part responsible for some of the wear resisting soundness for which Studebaker cars are famous.”

You may never meet any of these crafts men face to face. But every mile you drive a Studebaker you realize more and more that they’re real friends- solid citizens whose pride it is to help cut the cost and step up the pleasure of your motoring.

Studebaker retirees were the highest paid in the business .

Another proud family of Studebaker workers featured in this  1947 ad:

He says, “If three of my ten children had not been daughters, we would probably have a full football team of McGowans building Studebakers.”

Due largely to South Bend families like the McGowans there’s an unbroken continuity of fine craftsmanship in Studebaker cars and trucks. It gives them a trustworthy quality, year after year, that’s the most envied tradition in the automotive industry. 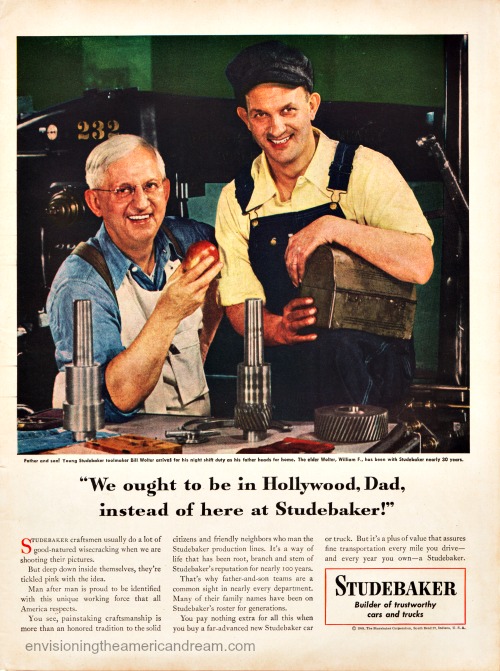 Father and son working shifts. The stark contrast between the now closed plants and the “golden era” when production levels were so high shifts worked around the clock, never shutting down. Vintage ad 1948

In this 1948 ad we are introduced to young Studebaker toolmaker Bill Wolter who arrives for his night shift duty as his father heads for home. The elder Wolter, William has been with Studebaker for nearly 30 years.

Solid citizens and friendly neighbors who man the Studebaker production lines. It’s a way of life that has been root, branch and stem of Studebaker’s reputation for nearly 100 years.

That’s why father and son teams are a common sight in nearly every department. Many of their family names have been on Studebaker’s roster for generations.

Like a gold watch passed from father to son, so were manufacturing jobs.

You would never guess it to look at Ernie Linstedt – but he rounded out two fifths of a century on his Studebaker job 2 years last July.

The factory made Ernie’s 40th Studebaker anniversary a day for him to remember.

Among other recognition he was presented with the watch  his son Norman is looking at here.

Norman recently did some figuring about that watch. It will have to tick off around 20 million minutes more before he can beat his fathers long Studebaker record. That will be sometime in the late nineteen eighties- and the Linsteds often wonder what the Studebaker vehicles of 40 years from now will look like.”

This much is pretty certain-father-and-son teams will be just as common a sight then as they are today, in the Studebaker plant.

Sadly,  Norman will never get to beat his fathers record.

For over 90 years Studebaker automobile manufacturer based in South bend Indiana had a reputation for quality and reliability. Studebaker retirees were among the highest paid in the industry.

But stiff completion and price cutting by the 3 big auto manufacturers doomed the enterprise. The new car sales war between Ford, Chrysler and GM in the early 1950s wreaked havoc on Studebaker and the company declined rapidly. After years of trouble, the last Studebaker rolled off the assembly line in 1966.

Studebaker once a solid name in the automotive business, has along with job security long disappeared.

Now globalization and outsourcing are hammering many icons of industry. The auto industry is just one example of overall decline in Americas industrial might over the past couple of decades.

The U.S. has been facing the gutting and hollowing out and closing down of American manufacturing. Companies lay off employees in droves, by the thousands.

Today long-term employment  is just another American dream myth that has slowly vanished along with job security.