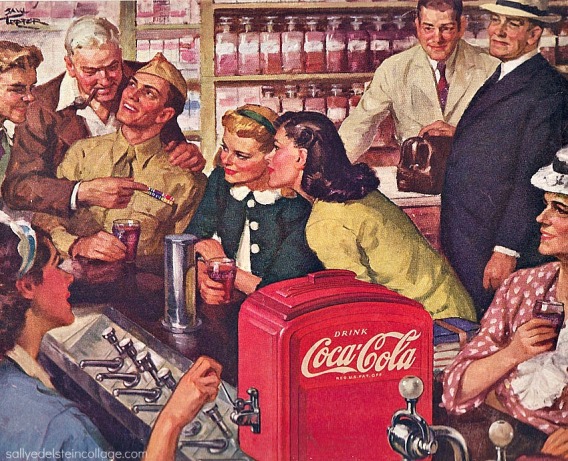 The patriotism was so thick you could cut it with a knife.

A rotund-and-darn-proud-of-it Kate Smith was belting out “God Bless America” causing a lump to form in all our throats, while a skinny kid from Jersey named Frank Sinatra was causing mass hysteria with millions from the bobby-sox set, including a college freshman from Brooklyn named Betty, my future mother.

That fall while my mother polished up her saddle shoes, my future father Marvin would be spit polishing his army boots in far off New Guinea.

We liked Ike not as president but as supreme Commander in Europe, the darling of D-Day. While a tall lanky Congressman from Texas, Lyndon Johnson, was busy bellowing in the house, a bespectacled former haberdasher from Missouri, Harry-Whats-His-Name-Truman, was FDR’s unlikely Vice presidential running mate in Roosevelt 4th term bid.

A smirking, poker playing Naval Lt. Dick Nixon was serving in the South Pacific, not far from where another young Naval Lieutenant, Jack Kennedy, was recovering from his heroics.

But for true profiles in Courage, no one could hold a candle to those brave, Stalingrad-sacrificing red, white, and blue Russians. Led by twinkly eyed, pipe smoking “Uncle Joe” Stalin, they were our comrades in fighting the Nazis.

Use It Up, Wear It Out or Do Without

It had been fifteen long and depressing years since Black Friday when Wall Street came tumbling down leaving us scrambling just to make ends meet. The  good ol’ American belief that hard work leads to prosperity was shaken to the core leaving our confidence shattered.

But by 1944 ,thanks to the war, folks were earning more money than they ever did. Deep pockets jangled with money and everyone was just itching to buy something….only there was a catch. Even though we had the dough to burn, we were restricted on how to spend it. As the war drew on, nearly every item Americans ate, wore, used or lived in was rationed, regulated, or unavailable. 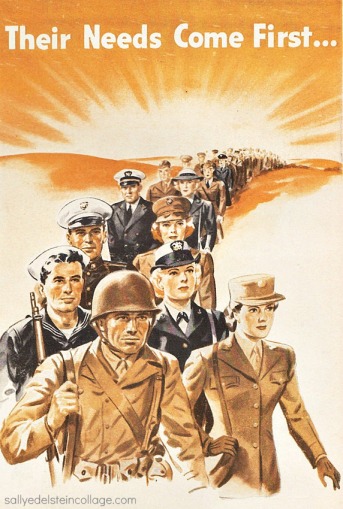 The war  required a great mobilization  of American society directed and financed by Uncle Sam who suddenly had a big shopping list.

With a big job ahead taking care of his family-about ten million men and women, his job was to feed ’em and clothe em and doctor ’em and outfit ’em from the top of their GI Haircuts to the toes of their regulation shoes.

Industries were working  day and night- and there still was not enough to give him everything he needed so we were asked to “help fill his list first and fast by going “light on yours”, as scarce material was allocated, civilian goods were stopped or limited in production.

Which would win the war quicker Mr. Civilian? A gallon of gas in the tank of your Ford or in an army tank?  Besides gas rationing, folks had to take good care of their pre-war tires and  their pre-war cars since there were no new automobiles to buy.

The Office of Price Administration had devised a ration system based on a point system and we became a nation of ration-wise housewives.

My grandmother became a regular soldier of the kitchen learning how to meet her daily problems of rationing and shortages, conserving food and preventing the waste of a single morsel.

Even with meatless Tuesdays there simply wasn’t a lot of meat, butter or eggs to go around. We didn’t concern ourselves with low fat and fat free. Fats were highly valued and preciously saved. Many could afford a big juicy T-bone steak, yet they couldn’t buy one because of rationing.

Besides which, what good was a steak dinner without a soothing cigarette to finish the meal with? There was an awful cigarette shortage too! My mother tolerated living without chocolate candy bars and learned to  live ith an occasional cup of coffee, but it was the darn cigarette shortage that drove her batty.

It was enough to drive you to drink.

Except there was no hootch to be had. It had been ten years since the repeal of Prohibition but you’d hardly know it what with the darn whiskey shortage. Distillers were in 100% production of alcohol for explosives and other war materials.

We knew their was only one way the job could get done- each of us must give whether it was on the home-front or in the war plant making the ammunition and tools our men needed to  win the war.

All over America workers were helping speed up production for victory and their health was more vitally important than ever before. It was our patriotic duty to stay war healthy since there was a shortage of doctors too

Ol’ Tojo may have thought he hit us below the belt gloating that “American’s exercise of freedom to choose” had made us soft and weak and unfit for war making…but boy what a sucker he turned out to be!

Manufacturers were working night and day turning radios into radar and Fords into fighter planes. General Motors would take a detour on the road to the world of tomorrow to supply our fighting men.

After all, when it came to tanks, wouldn’t you really rather have a Cadillac?

Even when things became available Americans were encouraged to thoughtful buying.

Meaning,  going without the things you really don’t need. And when you absolutely had to buy…taking good care of everything you owned so it would last longer and require less frequent replacements. All this would save labor and vital war materials for the men on our fighting front.

Wise buying, thoughtful buying, would help in another way too.

Beyond the War Waits Happiness

It saved money that could then be invested in War Bonds to help the kid in the foxhole…and also..give you a nest egg for those dreamed about post-war purchases that even a year before the war ended had been temptingly featured in colorful advertisements and articles in all the magazines.

War Bonds would be magically turned into dresses, electric refrigerators, movie cameras and vacuum cleaners…in a few years from now.

“…Beyond the war waits happiness. Engineers and scientists were busy devoting their toil and genius to the weapons of war,” manufacturers reminded us somberly, but in the same breath teasingly hinted that “already in their laboratories and assembly lines the fruits of their efforts held undreamed of promises for the future. “

Betty and her parents like millions of Americans had put their money into War Bonds so that after victory they could stop dreaming and start owning!

Step On The Gas!

With Uncle Sam’s pledge that every man and woman should have the freedom to make dreams come true when peace comes, he rolled up his sleeves and got to work.

Not only did he pass the GI Bill of Rights that spring promising millions of our fighting boys generous government aid for higher education and home buying, he wisely approved a plan for the building of inter-regional highways to keep these returning hero’s and their family’s get to their spanking new suburban homes.

With his eye on the Post-War future and the future of his fighting boys, the golden age of the American dollar was hatched at a hotel in New Hampshire that summer. Retooling the world economy at the Bretton Woods Conference in July assured that our future would be paved with gold.

This was what the boys were fighting for!

Rosie the Riveter Goes to War

Rosie The Riveter Gets her Pink Slip

On the Front Lines With Coca Cola