A crackerjack resume can only take you so far.

In a rough economy, opportunity knocks few times these days. Too many folks are seeking jobs and competition is keen. So it is important to make every asset count.

To help put your best foot forward in the job market I turned to some time-tested advice to keep in mind when looking for that good paying job.

Whether you are seeking a more advanced position, looking to change jobs, re-enter the work force or seeking a promotion, these simple time proven tips culled from vintage ads may make a big difference in securing that raise and getting that corner office in no time!

Passed Over For Promotion

The first success story comes from a 1951 ad for Kiwi Shoe Polish.

Passed over for promotion yet again, Ted Dean was down in the dumps and didn’t need reminding from his wife.

“Same old story…the boss turned you down! And don’t blame your boss! It’s your own fault and I can tell you why”…Mrs. Dean soundly scolded her hubby.

Post-war jobs were plentiful especially for a bright young vet like Ted Dean. Private First Class Dean had no trouble landing a job once he returned from his stint in the service. His boss at Wilcox Barrett was mighty glad to have a young vet like Ted on board.

But despite Teds hard work, he was passed over for a promotion time after time. Once again it was Dick Wilson who got the promotion, not poor Ted  Dean.

Diligence and well written reports were not enough to get Mr. Dean ahead.

Why was it always Dick? The boss had a tough choice to make: both men were smart, good at their jobs.

But Dick had something extra: better appearance and shinier shoes

He made the right impression on the people he met and on the boss.

One day quite out of no where, a big black  bird appeared in their home. “Let me tell him Mrs. Dean! , the Kiwi Bird chirped in directing his caustic comments to Ted. “Your shabby looking shoe’s didn’t help you any chum! You know the boss is a stickler for neatness!”

“Well if it isn’t KIWI…Pal of my GI Days! No shoe polish ever gave such a swell ‘Parade shine'”Mr Dean said, his face brightening up.

Ted looked down at his scuffed wingtips and felt ashamed. What good was a pair of costly cordovans if they were all scuffed up.

Ouick as a wink, Ted got busy. His once shabby shoes now gleamed. Old Sergeant Riley would be proud!

With his newly lustrous shoes providing a polished escort for his fine slacks and suits, Mr. Deans boss sat up and took notice. Dazzled by the shine on Ted’s Florsheims, his boss exclaimed: “Say there, Dean; you’re just the fellow we need to head up accounting!”

Rushing home from work, his pay envelope heavy in his hand , Ted was fairly bursting at the seams to share the good news with his wife.

“This time I did get the promotion! Mr. Dean boasted to his loving wife. “Kiwis tip meant money in our pocket!

How about you- do you dress for success. Do your shoes help you get ahead or do they hold you back like Ted?

Payday Brought a Thrill to Phil! 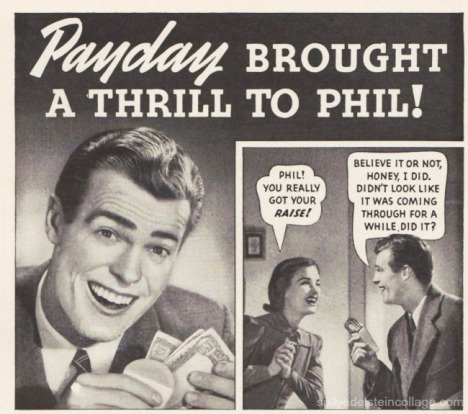 Another tale of business success is brought to us by Colgate in this 1940 ad.

Phil Johnson was a real go-getter. Captain of his team and president of his class, this former campus hero was a bone fide Ivy Leaguer.

With his sheepskin diploma and his gift for gab, it was no surprise that he was snapped up by the city’s biggest insurance companies. Phil should have been riding the express train to success.

But over and over  he was turned down for a raise.

Driving to and from work in his dilapidated De Soto, Phil wracked his brains as to his lack of success.

The one thing they didn’t teach him in school

Lucky for Phil, his boss had a soft spot for him and tipped him off.

It was the best advice he ever got.

Princeton taught him everything about business except the thing he most needed to know- how to avoid offending business men with whom he came into contact.

The number one handicap in business is bad breath.

A simple visit to the dentist sent Phil back on the fast track. The dentist told Phil in no uncertain terms that offensive breath was the number one impediment to success and regular brushing of Colgate Dental Cream would make sure his breath was beyond reproach.

We’re In the Money!

“Phil ! You really got your raise?” Helen asked incredulously.

“Believe it or not Honey I did.” Phil said excitedly. “Didn’t look like it was coming through for a while did it?”

“No I almost gave up hope,” Helen professed.

“It was a lucky day when the boss tipped me off to see my dentist.”  Phil observed. “Gosh to think all that was holding me back was my breath!” 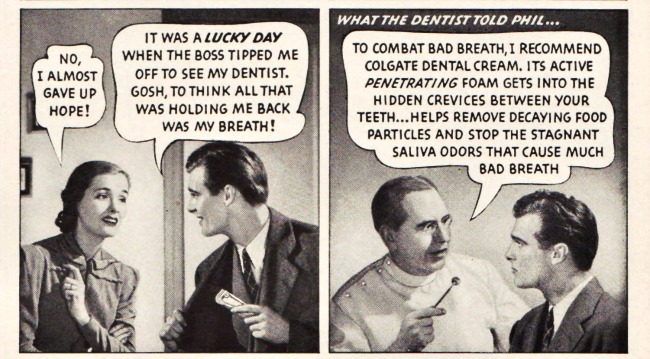 And now Thanks to Colgate Dental Cream….. 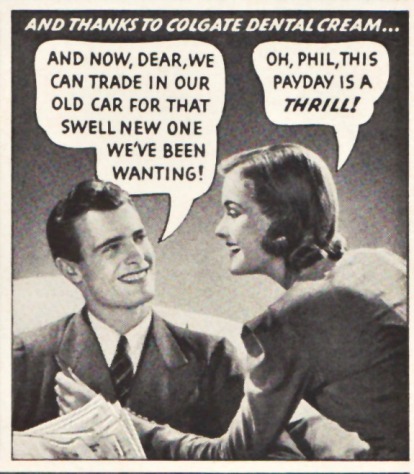 “And now Dear,” Phil tells his wife, “we can trade-in our old car for that swell new one we’ve been wanting!” 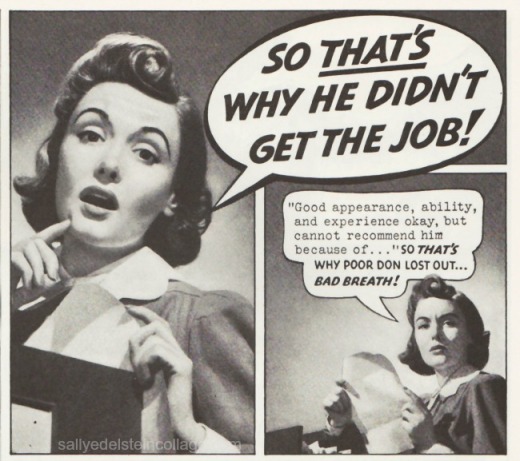 In another 1940 ad, Colgate offers advice to job seekers.

With a bucket load of charm and snappy patter, Dashing Don was a real take charge kind of guy.

His glamour boy good looks helped him get the girl alright, but when it came to a good paying job our hero was batting zero.

Without a good paying job there was no way he and his fiancé Kay could tie the knot. Kay was a swell gal but how long would she stick around with a loser like him.

Knocking on doors, he pounded the pavement day after day in search of a job till his poor tired dogs gave out. Interviews were snap to secure for someone like Don, job offers not so much

Downtrodden, Don was dumbfounded by his lack of success.

It took his gal pals snooping to discover the truth about her beau Don.

Kay could be a real busybody, always sticking her nose where it didn’t belong. Until one day her snooping paid off…in spades.

While poking around Dons belongings she stumbled upon a letter addressed to Don from a prospective employer.

Kay’s curiosity got the better of her

“So That’s why he didn’t get the job,” Kay read from a mystery letter. “Good appearances, ability and experience okay, but cannot recommend him because of …” So That’s why poor Don Lost out…Bad Breath!

Kay needed to confront Don about this career killer …pronto!

Arranging a rendezvous at Hillside Park, she broached the delicate topic.

That noon Kay confronted Don at the park “And Don, I think you might still have a chance at the job If…Well wont you see your dentist? “ No chump, Don jumped at the chance: “You bet I will Kay!”

Don’s luck was about to change thanks to Colgate Dental Cream.

Later-thanks to Colgate Dental Cream, Don got a job! Rushing to the nearest pay phone he called his fiancé Kay with the great news: “Kay? Listen, Honey I Got the Job! And guess what it pays! Sa-ay! Now we can afford to get married!”

Underarm odor is bad business-anywhere anytime as poor Jim found out the hard way in this 1941 ad for Mum deodorant.

Jim felt sunk. On brains and backbone and initiative, Jim rated at least a draw with Don. But Don had just been made head of their department at about twice Jim’s salary.

Everybody knew what held Jim back- except Jim.

Jittery Jim was afflicted with the scourge of the 1940s- nervous BO and was oblivious to it as so many other unfortunates were.

Nothing held a man back in his career more than BO

No matter your station in life, no one was safe from nervous BO, and despite being a good Joe, he soon found out he was not immune either. And sadly it was what was keeping him from getting that well deserved promotion,

Then one day just as the big Boss was considering a one man shakeup, Don came to his rescue. Taking Jim aside-

Don told Jim: “Don’t ask too much of your shower- a shower only takes care of past perspiration! Mum prevents offensive odor to come!” 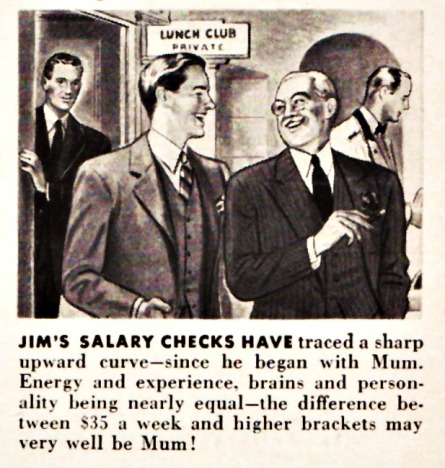 A Hair Raising Story of Success 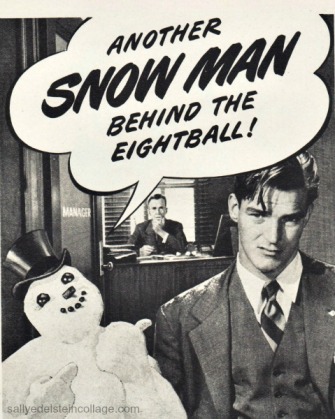 Poor George was one gloomy Gus.

Turned down for a raise yet again. Five years on the job working for Acme Engineering and he had yet to get a boost in salary. A top-notch engineer, his diligence and hard work won him praise.

He scratched his head in confusion. “I know I’ve got enough on the ball, but I can’t seem to get a raise” he moped to his wife.

What he didn’t know was that behind his back the fellows in the office jokingly called him snowman.

But dandruff was no joking matter. Not when it came to succeeding in the dog eat dog world of business.

That’s when Selma his wife took matters into her own hands.

“Appearance count too. Why don’t you try Jeris get rid of that loose dandruff and stop looking like a snowman.”

It wasn’t long before regular use of Jeri Hair Tonic payed off…and how! 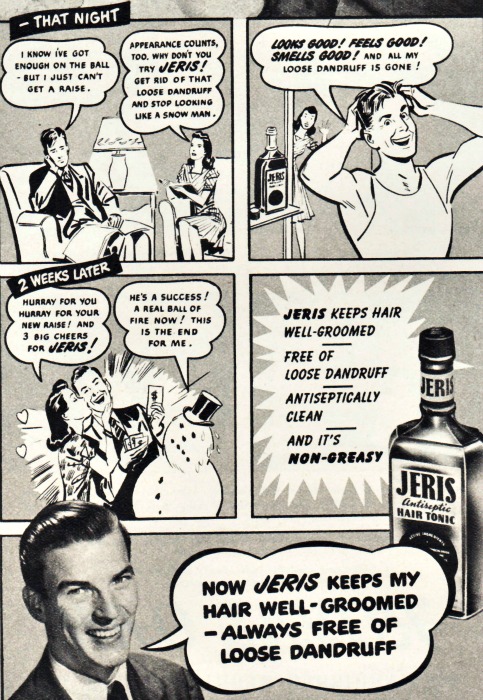 Only 2 weeks later George returned home to an elated Selma who squealed in delight at his bulging pay envelope “Hurray for you! Hurray for your new raise!” she said “and 3 big cheers for Jeris.

So long dandruff…he’s a success – a real ball of fire.

Handsome vigorous looking hair can be as good as a raise. It’s just that easy!

George learned the hard way. If you have business ability you can climb the ladder of success. But if you have the appearance to sell your abilities you can take the fast elevator.