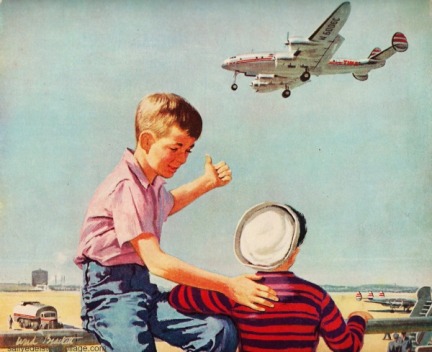 Starting in the fall of 1958 the roar of jets could be heard streaking through the blue skies of my Long Island suburban neighborhood, screeching over split levels, supermarkets and elementary schools on a daily basis.

In a flash,  it seemed we were catapulted into the jet age.

Interrupting our once leisurely Sunday breakfast one December morning, the rude roar of a plane passing overhead totally obliterated the happy snap, crackle, pop, sound effects of my Rice Krispies.

Staring up in the direction of the noise, Dad wondered aloud whether the plane might be one of Pan Am’s new Jet Clippers that were getting so much press lately.

Proudly, Pan Am had taken America’s airlines into the jet age. Since October, it was a much smaller world especially with the new commercial jets that could fly you from NY to Europe in a magical 6 ½ hours.

Stabbing a forkful of burnt salami and runny eggs, Dad wondered what gourmet treat the glamorous Pan Am-coffee-tea-or me- stewardess might be serving her passengers as the jet whisked those lucky travel-now-pay-later tourists  away for their La Dolce Vita Roman Holiday Tours.

The prospect of transatlantic jet service was the talk of the town. Suddenly the whole world was within easy reach, the future of air travel had arrived.

Jet travel was a new concept of air transportation. A major advance over turbo props, it was a world of vibration-free, quiet comfort.

Transatlantic air travel in the immediate post war years was still a novelty. At a time when a typical trip by sea across the Atlantic took about 5 days, air travel in a turbo prop plane offered the advantage of cutting that down to less than half a day, with stops usually in Gander Newfoundland and/or Shannon, Ireland. 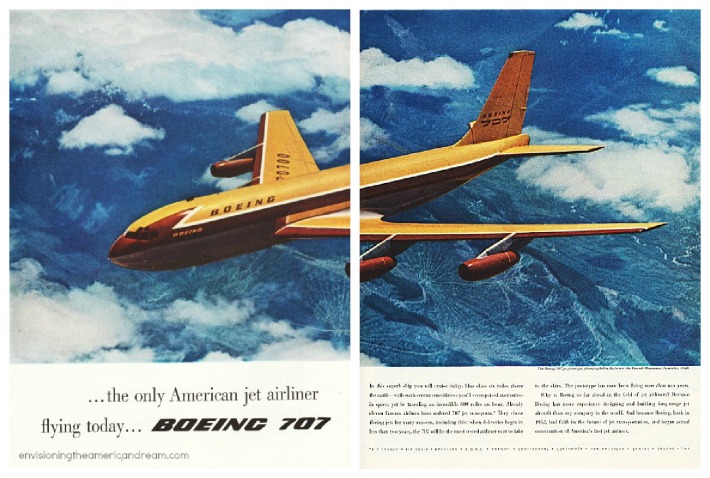 Dad explained that now with the new Boeing 707, Pan American had ushered in the jet age.

Although Pan American boasted that their jet clippers were the first transatlantic jet airliner, the U.S. was not the first nation to enter the jet age in commercial aviation. In the early 1950’s while Americans were busy building hot jets for the Air Force, the British already had them in commercial operation with its De Havilland Comet. In May of 1952 Britain’s Comet entered service and astonished the world.

But when American airlines did convert to turbojet-powered aircraft in 1958 they did so with the most successful jetliner yet constructed- the Boeing 707.

Boeing teased the public a full year ahead of actual availability, boasting of its great feat in an advertisement that ran in 1957 :

“The worlds most experienced builder of long-range jet aircraft brings you the jet airliner of tomorrow-Boeing 707” And they boasted “Boeing was the only American jetliner flying today!”

“In this superb ship you will cruise indigo blue skies 6 miles above the earth-with such serene smoothness you’ll seem poised motionless in space. Yet be traveling an incredible 600 miles an hour. “

“Already 11 famous airlines have ordered 707 jet transports. They chose Boeing jets for many reasons including this: when delivery begins in less than 2 years the 707 will be the most tested airliner ever to take to the skies”

Leaving on a Jet Plane? 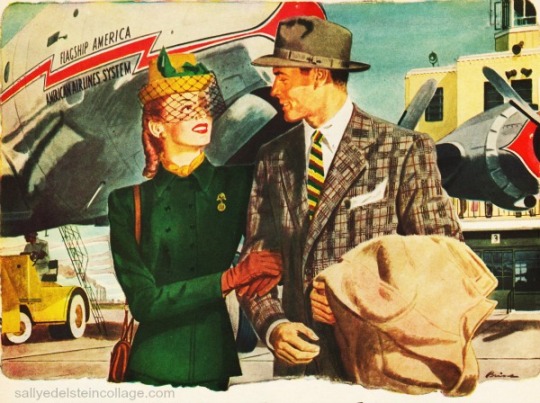 His curiosity peaked, my brother Andy wanted to know if our parents had ever flown in a jet. Mom explained that the very first time she had ever flown on a plane was when she and Dad had gone to Cuba on their Honeymoon, but that it had been a regular airplane which was both slower and noisier than a jet.

“First time nothing!” Dad boomed. “You were a seasoned pro by the time we went to Cuba.”

“What about all those flights you took at the 1939 Worlds Fair?” Dad joked.

Mom threw her head back and laughed.

She scooted off to her bedroom and started rummaging through one of her many junk drawers. Among the many marbles, old skate keys, mints, receipts, matchbooks, and other assorted flotsam and jetsam she found what she was hunting for.

She came back proudly displaying a shiny button that said “I Have Seen the Future” on it. Gently pinning the blue and white button on my coveralls, I clapped my hands and smiled in delight.

Excitedly, Mom told us that she had saved this button since she was a little girl. It was from an exhibit at the 1939 New York Worlds Fair, which, she explained, was like a huge amusement Park, but for adults too.

At the General Motors Pavilion, which was the most popular exhibit of the Fair, there was something called the Futurama ride that took you on an imaginary flight across America from coast to coast.

“Remember, in 1939 very few people had every flown in an airplane,” Mom began, “so it was quite exciting.”

“You really felt somehow like you were flying,” Mom recalled.” I don’t know how they did it, but you had the sensation of flying over a huge detailed diorama of life in the distant future of 1960; like you were catching a glimpse of the world of the future from the window of an airplane.”

That sounded like the best part -it was supposed to be a look into a glittering future that was going to be so wonderful, so full of promise

“Your future, she said smiling, softly kissing my head, “the future I would dream about for you.”

All Eyes to the Future

“It was a 15 minute ride, and you sat partially enclosed in a high-backed blue velour seat. A narrator spoke to you saying ‘A new world, a greater world a better world, come travel into the future!…The America of 1960!’

“You really got goose bumps. It seemed, at the time, like so far off into the future,” she said wistfully.

So we see things to come, the narrator spoke optimistically. A new world with a future –that is where we are going to spend the rest of our lives.

“And now, can you believe it,” Mom continued, “that’s only two years from now- Andy you’ll be a big boy of eight and Sally you’ll be five years old and just starting kindergarten.”.

My eyes lit up at the idea of the future. All Eyes to the Future!

“Boy, what I remember most, were those god awful lines,” Dad said transported back to 1939.

“That swooping, simulated airplane ride was really all the talk of the fair, so sometimes you had to wait on line for as much as four  hours. But once you got there, you forgot all about the wait- you were swept along, together with 600 other visitors, on a fifteen minute ride and the narrator, a man with a really d-e-e-p  v-o-i-c-e, spoke about New Horizons and Highways.”

“What was amazing,” Dad tried to explain, as he cut into a piece of cinnamony coffee cake, “was that they synchronized the narrator’s voice with the movement of the seats, so you felt  like he was speaking just to you, at just the right spot in the journey.”

“It was”, lowering his voice to sound like the recorded narrator, ‘a magic Aladdin like flight through time and space. Old Horizons’, Dad continued speaking even deeper and slower ‘op- e-n- in-g  to  n- e- w- Ho-ri-z-ons’.

“You looked down below at teeny tiny models of hundreds of thousands of buildings, and thousands of little teardrop shaped cars and a million trees and you know, you really had the sensation of swooping down getting closer.”

“As you crossed America,” he explained in obvious delight, “the dusk of the diorama turned into night and then the plane moved across the country and the sun rose again.”

My parent’s enthusiasm for the future was infectious-the images gripped me and I took it all in.

All Eyes to the Future.