Menstruating in the Age Of Mad Men

Menstruation and the Mid Century Girl

A woman’s period, once cloaked in privacy  lingering on the periphery of polite conversation  has now permeated public discourse.

Credit  in part goes to the heated debate about the inequity of tampon taxes as well as Donald Trump’s sexist comment about “blood coming out of wherever”  which  stirred conversations challenging culturally conveyed ideas about periods being something unseemly.

The last time I remember menstruation being so publicly discussed was when I was in fifth grade.

2015 might have been dubbed the year of the period by various publications, but for me that honorarium goes to 1966.

That was the year when girls in my grade were initiated into the wonderful world of womanhood  via a film called Growing Up and Liking it.

Now That You’re a Mid-Century Woman 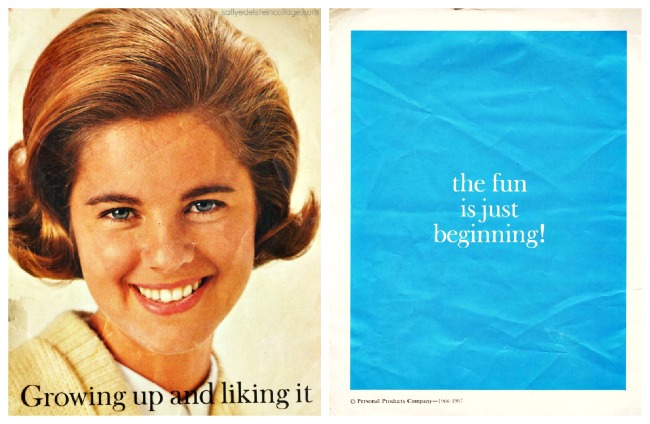 In the spring of 1966, all the fifth grade teachers in my suburban school took the girls aside informing us we were soon to see a “very special” movie especially for us about “growing up.”

Like going to an R rated movie we would need to be accompanied by an adult woman  to view this facts-of-life film, so were handed  a formal invitation to  give to our mothers  as though inviting her to a tea.

Included with the invitation was a little booklet  provided  by Modess ( makers of fine sanitary napkins)  which we were to review with out mothers to prepare us for this corporate  sponsored  movie about menstruation “Growing Up and Liking It: Now that You’re A Woman.”

Like generations of American girls, my initiation into menstruation was corporate all the way

“Nicest way to prepare your daughter for menstruation and sanitary protection ( best before her 11th birthday.)” Kotex ad 1965

Heavily competitive, both Kotex and Modess, the big guns in sanitary feminine products, offered free booklets to mid-century mothers to help guide their daughters through this most miraculous time.

And make loyal lifetime customers to their brands. 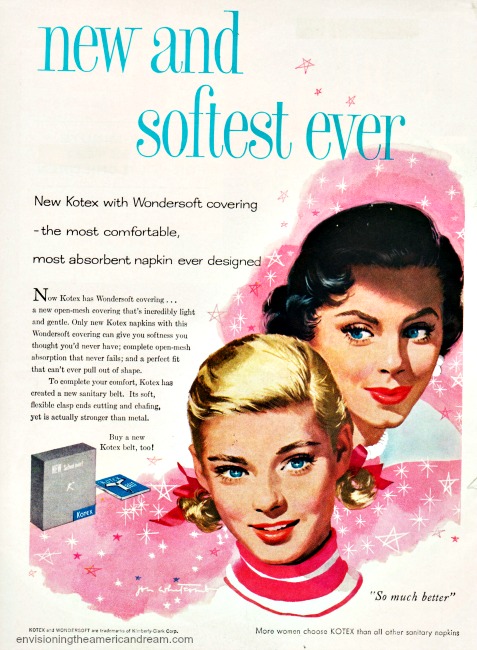 Even tomboys get their period. Vintage Kotex ad 1935

The competition between the two  companies for Lady Time loyalty had been waging for decades.

Starting in the  1930’s  corporate sponsorship had come to the rescue of timid mothers who couldn’t bring themselves to have the talk  with their daughters.

Shamelessly promoting their products, educational divisions within the Feminine Personal Products industry began to supply mothers, teachers and the PTA with free ready-made programs of instruction on “menstrual health” including  booklets, films and pamphlets with catchy names like Personally Yours, and You’re a Young Lady.

“From lollipops to lipstick was a long jump!” explained the introduction to this Kotex booklet. “Pigtails change to perky curls…grubby nails grow long and lacquered. And that wicked little boy next door may soon make stars dance in your eyes.”

In 1940 coming to my own teen age  mother Betty’s  rescue, was the Kotex classic  “As One Girl To Another.”

Kotex booklet “One Girl to Another”

Lucky for a young bobbysoxer like Betty,  her own on-the-ball modern mother had sent away for that  free booklet from Kotex.  The new book, the ads promised   “tells all…gives answers to intimate questions.”

Like so many girls, Betty fretted, “Hows a girl to learn what to do what not to do on difficult days?”

Growing Up and Liking It

Growing up and Liking it booklet by Modess 1965

Compared to Mom’s booklet,  my manual from Modess “Growing Up and Liking It”  was modern all the way targeting  the  now generation.

Flipping through the book , I sensed its  upbeat tone:  The Fun is just begining, it claimed right off the bat.

“This is what you’ve been waiting for,” it gushed assuring readers that “someday when you fall in love and marry, you will want to have children.” Menstruation was “part of being female . . .part of growing up . . . part of the wonderful process of changing from a child into a woman.” 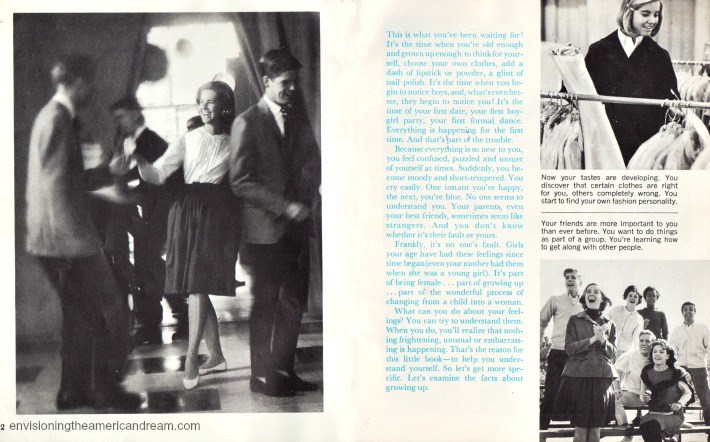 Modess Growing Up and Liking It 1966

Geared to the Pepsi generation, the photos of girls were as bubbly and effervescent as a bottle of pop, and as perky as any teen in a Pepsi ad.  These happy-go-lucky gals sporting Patty Duke flips and Ship n’ Shore separates were pictured dancing,  shopping and playing ping-pong. The girls just glowed with happiness …all because they had  proper menstrual education. 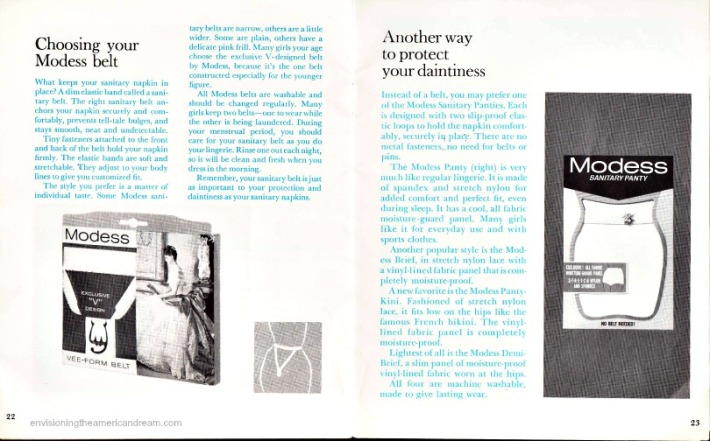 “Remember your sanitary belt is as important to your protection and daintiness as your sanitary napkins.” Growing Up and Liking It” Booklet

Tampons were not an option for well brought up young ladies so  bulky sanitary napkins were your only option. A thick wad of cotton shielded with blue polyethylene strip  guaranteed protection from those embarrassing moments.

The right sanitary belt to secure the monstrous  napkin was a gal’s best friend. Modess promised  that “The proper sanitary belt would prevent tell-tale bulges and stay neat and undetectable.

Modern girls learned you  needn’t let having your period cramp your style. With the proper sanitary napkin and sanitary belt, you could frug the night away, confident and carefree.

“You’ll feel more confident if you know you can trust your sanitary napkin,” it told readers.

It was all a confidence game,

Of course sometimes you might get down in the dumps and the booklet was not lacking when it  came to helpful hints of getting rids of those red-letter day blues.

Before you know if you’ll have yourself convinced that you really do feel glad to be alive, and YOU!

What Happens When You Grow Up

Growing Up and Liking It Booklet Modess 1966

The day of the film loomed with dread for me. Because my mother had long-standing plans  to be out-of-town on that day, I would tag along with a friend and her mother, which only added to the humiliation I was already feeling.

While the boys,  still blessedly innocent in their boyhood were sent off to perform some manly activity like dodge ball, we girls marched silently like lambs to the slaughter into our school auditorium, entering  as innocent young girls to leave an hour later as world-wise women with the weight of a woman’s burden on our young shoulders.

Menstruation we were told cheerfully  yet somberly, by our bespectacled school nurse  who served as our guide into womanhood, was a Gift something to Cherish nothing short of a Miracle to be hold.

It was a miracle I didn’t turn red, not from my period but from the sheer embarrassment of the whole ordeal.

The 16mm sound movie projector had already been wheeled in to place by some pimply faced boy  from the AV club and had thankfully long gone leaving us girls and our uterus’s to our selves.

As the movie began I felt a twinge of  disappointment. My hopes of being ushered into womanhood by Walt Disney were dashed.

In 1946, Walt Disney in partnership with Kotex’s Kimberly-Clark, released a classroom film called “The Story of Menstruation” featuring a Bambi eyed  redhead, who looked like she palled around with Snow White and Sleeping Beauty. The popular film with Disney animated ovaries,  cute little eggs, and wiggly sperm that looked like tadpoles, that had been shown to previous classes had been replaced.

Our film  though cheery and upbeat was standard PSA affair.

Taking Menstruation in Your Stride 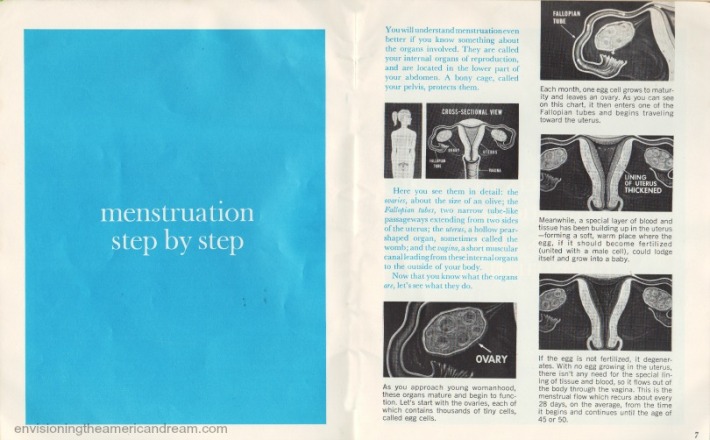 “Lets face it, there is sometimes some distress and discomfort at menstrual time,” the deep baritone voice of the movie’s narrator informed us. “It need not be unpleasant when the woman has learned to take care of herself both physically and emotionally.”

We were advised to “let up  just a little in your more strenuous activities (no 10 mile hikes or marathon roller-skating just then, thank you.) Avoid anything with that will chill you through and through: ice-cold showers, being out unprotected in the rain or sitting with wet feet through class after class or staying in swimming overlong.”

“Of course if you really are laid low with this menstruation business, it will be wise to consult a doctor in whom you have confidence. Quite possibly he’ll try to help you feel a little happier about being a woman.” (Naturally being a male doctor he can speak from experience.)

I Enjoy Being a Girl 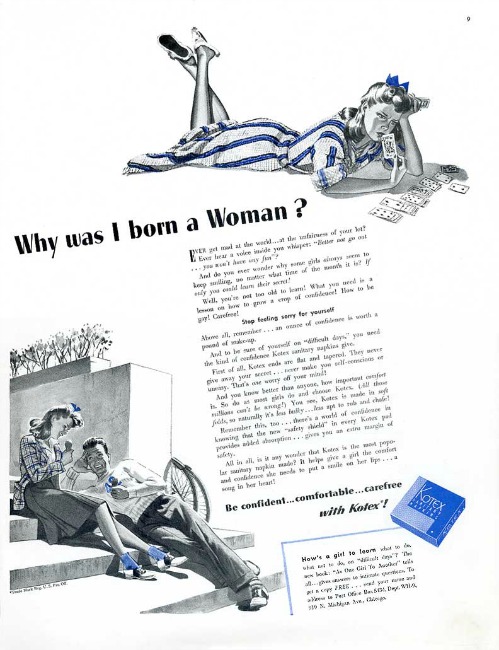 The narrator even tried  his hand at some pop psychology: “Way down deep you may be resenting being a girl or you may be rebelling against getting grown up and this is what makes you so miserable.”

Not everyone enjoyed being a girl and apparently you had to be coaxed as the reader learns in this ad from Kotex:

Ever get mad at the world…at the unfairness of your lot? Ever hear a voice inside you whisper  ‘Better not go out…you won’t have any fun?”

And do you ever wonder why some girls always seem to keep smiling no matter what time of the month it is? If only you could learn their secret.

Well, you’re not too old to learn! What you need is a lesson on how to grow a crop of confidence! How to be gay! Carefree!

Above all remember… an ounce of confidence is worth a pound of makeup.

No ravishing cherries in the snow lipstick can give you the confidence of the right sanitary napkin,

Getting your period was like a bouquet of daisys! “Growing Up and Liking It” Modess booklet 1965

“Yes, above all, be glad that you are a girl and don’t start feeling sorry for yourself,” the movie’s narrator continued.

“You’d be a lot sorrier if you never did menstruate, but remained an “It” ( whatever that would be!) without any of the normal manifestations of being a growing up and grown up woman. ”