Kennedy Nixon Debate – A Picture is Worth a Thousand Words

The 1960 television debate between Kennedy and Nixon was the presidential debate that proved a picture is worth a thousand words.

The 1960 presidential debate was an unprecedented event.

For the first time ever, the American voter,  in the comfort of his own living room could watch a presidential campaign debate staged specifically for the viewer. It was the debate that proved a picture is worth a thousand words.

Monday September 26, 1960 was anything but an ordinary Monday, in my home and millions of others.

At 9:30 that evening my parents  joined the 70 million viewers who  would tune into CBS to watch the first ever  in a series of televised debates  between Vice President Richard Nixon and Senator John Kennedy. The debates were a nod to the growing importance of television, which by then already reached nine out of ten households in the United States.

“Never before have so many people seen the major candidates for President of the United States at the same time,” NBC newsman Frank McGee put it when he introduced the second debate on October 7, “and never until this series have Americans seen the candidates in face-to-face exchange.”

My parents would be watching history in the making.

More precisely, my father would be watching.

My poor mother was stuck in the kitchen, even at that late hour doing the dinner dishes.

Earlier that evening, Mom had been called away to an emergency PTA meeting to settle a brouhaha over a bake sale debating the merits of a bundt cake over 7 layer, so she  had yet to finish her kitchen chores. But with the TV volume turned up loudly from the set in the living room she could hear every word the candidates said.

As Mom tackled the dinner dishes,and Brillo’d the pots,  Dad settled in to his easy chair with a pipe and a bowl of ice cream ready to watch these two cold war warriors debate.

The evening began like most Monday evenings with To Tell the Truth, the popular CBS show  where a team of celebrity panelists try to correctly identify which person who has an unusual job or achievement  against an imposter.

I was disappointed to be missing out on the upcoming  highly publicized debate so important an event  that it would be preempting Sheriff Andy Taylor and the good folks in Mayberry.

But in the end,  the loud volume of the Philco filtered into my bedroom keeping me awake.

What is Your Name Please?

Howard K. Smith of CBS was the moderator of the debate, and there would be time for 2 questions from each of the 4 newsmen: Robert Fleming of ABC, Stuart Novins of CBS, Charles Warren of Mutual Radio and Sander Vanocur of NBC.

Truthfully, to me  the presidential debates sounded like a variation of To Tell the Truth. Instead of three contestants there were just two and it was up to the TV audience to determine who was telling the truth with both candidates claiming to be the next President Elect of the United States. One was telling the truth the, other was not.

Instead of congenial Bud Collyer,  Howard K. Smith was the moderator host, and replacing lovely Kitty Carlisle and Tom Poston were a distinguished group of newscasters asking the questions.

Perhaps I wasn’t missing much after all.

A staunch republican, Dad was sure Nixon would be the winner. Not only was the Vice President a skillful debater but  his success after his 1952 Checkers speech that had saved him the 1952 Vice Presidential candidacy  proved Richard Nixon had mastered the art of television.

Besides which, while watching Kennedy’s acceptance speech on television at the summer convention, Dad had thought the inexperienced senator spoke too rapidly, that his voice was too high-pitched and his concepts too complicated for the average American. Nixon’s the the one, he was certain.

Mom, a Kennedy supporter wouldn’t need to be swayed.

So it came as a shock to poor Dad at how poorly Nixon looked at the debates.

A Picture is Worth A Thousand Words 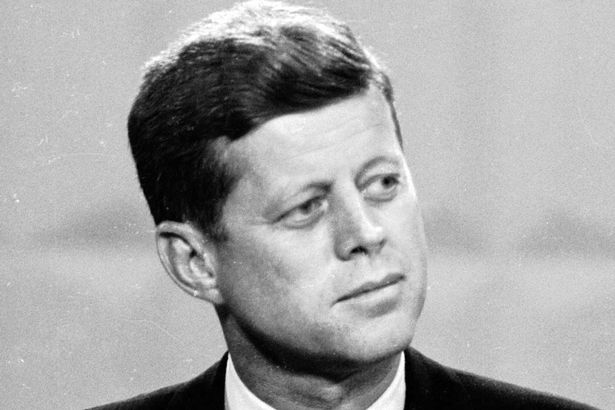 At 47 Richard Nixon was only 4 years older than John Kennedy, but he seemed tired and worn compared to the vigorous, sun burnished JFK.

The senator  was tanned and fit, and  combined with his dark blue suit, he crisply stood out  from the neutral gray background of the studio.

In comparison, a hapless Richard Nixon was haggard and his shirt collar appeared a half a size too large for him. He slouched, his expression was grim,  and sweat just beaded from his face.  He didn’t do himself any favors  by choosing a light gray suit which not only faded into the backdrop of the set, but seemed to match his ashen skin tone.

Dad noticed that Kennedy stared directly into the camera directing his answers to Americans watching at home. Nixon on the other hand with his beady eyes darting back and forth, looked off to the side to address the various reporters. Along with his 5 o’clock shadow, his shifty eyes gave him a sinister appearance.

The sweat just beaded from Richard Nixon’s face at the debate.

What Dad and most Americans didn’t know was that Nixon had fallen on some bad luck.

He had been very sick.

Hillary Clinton wasn’t the only candidate to be felled by illness so close to a debate. Fortunately Hillary has rebounded. Richard Nixon was not as lucky.

While campaigning in Greensboro North Carolina Nixon had hit his  right knee cap on a car door. The injury lingered. At Walter Reed Hospital he was told that he had a serious staph infection. Unless he remained  at Walter Reed for two weeks of intensive antibiotic treatment, the cartilage of the joint would be destroyed.

Reluctantly, he remained hospitalized, laying   flat on his back from August 29 to September 9 with his leg in traction, distressed  at the thought of the lost time. Later back on the campaign trail, he suffered a bout of flu in St. Louis. His voice grew hoarse.

When Nixon arrived at the Chicago studio for the first debate, he once again banged  his bad knee stepping out of the car.  Still running a low fever, he had nonetheless spent a grueling day on the campaign trail and looked drained by the time of the debate.

When it came down to it, Nixon was just not ready for his close up.

Before the debate both candidates had been  offered the help of top professional make up artists brought in by CBS from NY. Both refused. Bronzed and naturally telegenic Kennedy was more than ready for the camera. Nixon with his naturally pale skin and heavy beard  could have used the help.

Instead he sent an aide to a nearby drug store for  a package of Lazy Shave a pancake makeup created by Max Factor meant to hide the heavy 5 o’clock shadow. Lazy Shave “Hides the Beard!” claimed the box copy. A “color-cake for between shaves,” it was basically a powder makeup thick enough to mask a five o’clock shadow for a few extra hours.

But during the debate, Nixon began to sweat under the studio lights, and the makeup melted off his cheeks, making him look unshaven.

The rest is history.

Will The Real President Elect Please Stand Up

At the end of the debate Dad had a sinking feeling. His candidate was doomed .

Listening from the kitchen Mom was sure the debate was at least a draw between her favored candidate and the V.P., even giving a slight edge to Nixon. The fact was, both candidates were more or less matched when it came to substance. Each were skillful debaters and presented remarkably similar agendas.

Yet for those who only listened to the debate like my mother, and those who heard  it on the radio, the win was given to Nixon. But TV won over the 70 million viewers convincing them Kennedy was the victor by a broad margin.

In the end, Nixon failed his audition as a winning television candidate. When it came to substance, JFK stood toe to toe with Nixon, but it was JFK who appeared to stand  taller, more commanding and presidential.

To tell the truth, appearances would hence forth always matter. About that there would be no debate.