What Happened To America’s Trains Of Tomorrow?

Has the sun set on Americas great trains of tomorrow?

Americas great trains of tomorrow are a thing of the past; progress on our trains system seems to have been derailed. Once on the fast track, American trains can’t even compete.

The development of our rail transit has made little progress as we lag far behind the sophisticated passenger rail systems in Asia and Europe.

People complain about the trains in the U.S…. a lot. I should know, I travel by train up and down the North Eastern corridor frequently and whether in a Bostonian twang or a Noo Yawk accent the grousing is the same.

Furious, people justifiably gripe about trains – They’re not fast enough, they don’t go to convenient locations, they’re never on time, and many are just plain shoddy.

Vintage Ad Twentieth Century Limited New York Central 1951. “Step aboard and rest assured, of temptingly freshly prepared meals, sociability in the lounge,assured of a perfectly appointed room, assured of an air conditioned climate, assured that you’ll keep those distant dates tomorrow …with a certainty no other travel can match. “

Once upon a time the Railroads  rolled out the red carpet for you… literally.

Passengers on the famous “Twentieth Century Limited” running from N.Y.C. to Chicago walked to the train on a crimson carpet which was rolled out in both N.Y and Chicago.

As one  ad rhapsodized  poetically: “It’s Twentieth Century Time! A minute ago you were in the heart of a big city, with hurrying crowds, blaring taxis and newsboys shouting the evening headlines. Now you’re in a different world as you follow the crimson carpet down the platform of Grand Central Terminal towards the softly lighted, streamlined cars that will be your club on wheels for tonight.”

Nowadays the 21st Century red carpet is more likely to tattered, stained, its  floors sticky with beer cans rolling down the aisles.

The 2oth Century Limited was considered the most glamorous train in America. Aimed at the upper class and business travelers its style was exclusive and sophisticated. This express train that ran from N.Y. to Chicago was in service from 1902-1967

This magic carpet ride took you away to a place of pure relaxation with no worries as the copy from this New York Central 1946 ad explains:

“Magically the days tensions vanishes when you step into the Century’s luxurious Observation car. Deep cushioned chairs invite you to relax… Superb cuisine and service await you in the dinning car and you awake refreshed after  good nights sleep in the privacy of your room in a spacious bed with a rubber foam mattress.”

Even train stations themselves  were once glamorous places.

But as Thomas Freidman pointed out: “If all Americans could compare Berlins luxurious central train station today with the grimy decrepit Penn Station in NYC they would swear we were the ones who lost the war.”

On the Fast Track

In contrast to America, most of Europe have bullet trains, and Japan and China have made a huge investment in their rail system. 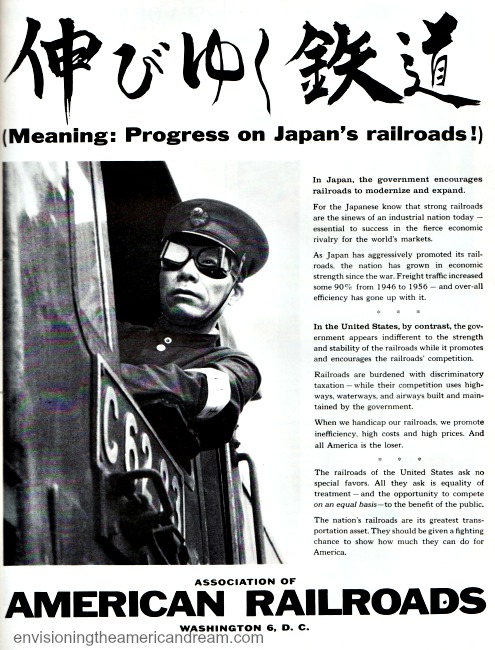 Nearly sixty years ago, the Association of American Railroads remarked on the progress of Japans Railroads far surpassing ours.

In Japan the government encourages railroads to modernize and expand

For the Japanese know that strong railroads are the sinews of an industrial nation – today essential to success in the fire economic rivalry for the worlds markets.  As Japan has aggressively promoted its railroads the nation has grown in economic strength since the war.

In the United States by contrast the government appears indifferent to the strength and stability of the railroads while it promotes and encourages the railroads competition.”

Railroads are burdened with discriminatory taxation while their competition uses highways, waterways and airways built and maintained by the government

When we handicap our railroads we promote inefficiency, high costs and high prices.

And all America is the loser.

There was a time however, when America was setting the pace for new railroads and there were no finer trains on the tracks.

When it came to trains, post-war America was on the fast track. There would be a vast new fleet of streamliners, fast and dependable as the day was long,  offering panoramic views in gracious and beautifully styled cars.

Even before WWII ended, advertisements appeared laying it on thick about the grand future ahead for the American rail system. Already on the drawing boards were the shape of things to  come. New, modern trains, daring designs; exciting and novel innovations; more power , new speed; new riding qualities; new comforts and luxuries; new services and ideas in travel and shipping- “in a word ,transportation values beyond anything known or experienced before!”

That was part of the American Dream.

Americans expected great things of their railroads and they would deliver.

“Yes, it’s a great new day for railroading-with even greater days ahead,” crowed one ad from GM Diesels.

“One thing is certain -America will have an entirely new level of transportation post-war. The amazing achievements of the railroads under the stress of war have made this possible.”

“American railroads are in a favored position to lead in this fine new service.”

Railroads and the American Way 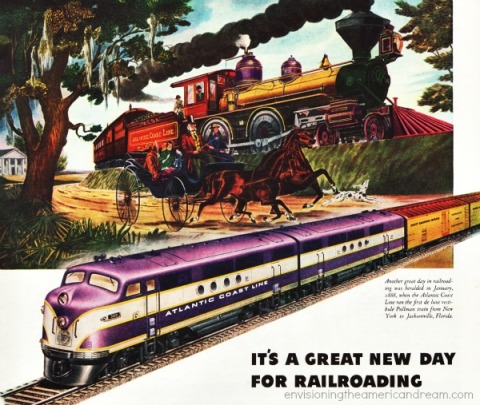 Railroads were the basic lifelines of this country. Nothing bespoke of the great American Way of capitalism and competition  than out great rail system.

General American Transportation patriotically pointed out to the reader in a 1945 advertisement:

“The American way of free enterprise, promotes a sound and vigorous growth in the railroad  industry- so that nearly 1,200,000 railroads have year-round employment keeping cars rolling- day and night, fine weather or foul.”

A Glimpse into the Future 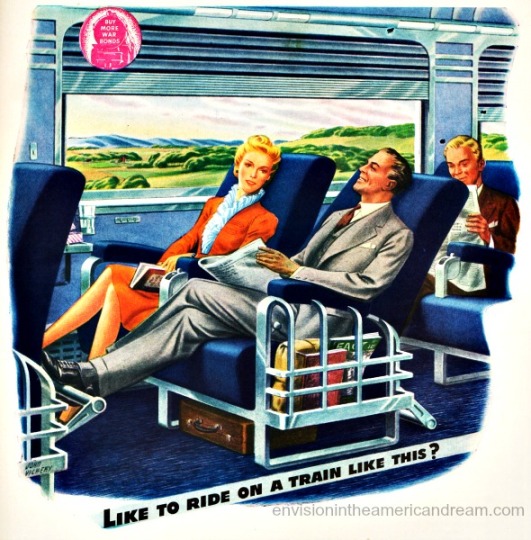 The Association of American Railroads offered war-weary citizens a glimpse into that cushy post-war future they could look forward to.

Looks pretty nice doesn’t it? And it is nice! Light, bright, roomy and comfortably air-conditioned.

“Smooth riding at high speeds with pillow soft seats that fairly invite you to sink down and relax- wide windows that provide a sweeping view of the scenic landscape – and dozens of important little travel conveniences.

Where will you find such coaches as this?

Many of them were built before the war began and are now in use. Hundreds more had been planned but never built- you know the reason why. We haven’t been able to use scarce materials and man power to build trains as we’d like to have them.

There’s a war to win and we’re doing our level best to meet the nation’s wartime transportation needs.

But once the war was won…watch out. 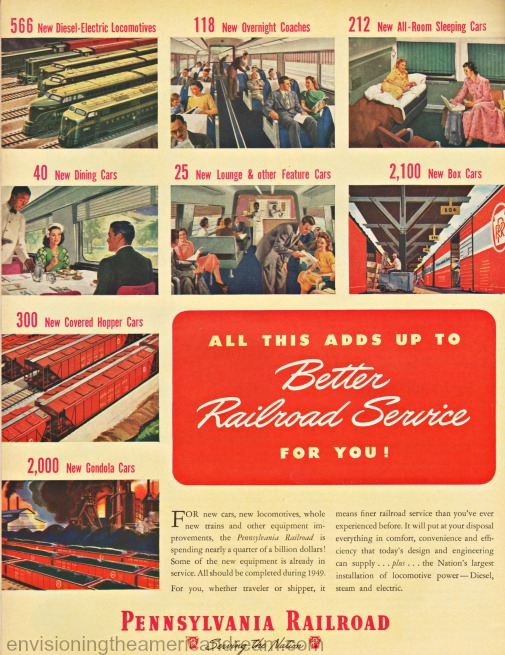 By 1946 ads began appearing offering glimpse of the post-war future.

Railroads were looking ahead, planning for better trains for tomorrow. Unheard of luxuries would abound. There would be trains with club cars that convert into theaters or night clubs, actual telephone service en route, coaches with lounge-car luxuries, childcare for children and sleeping quarters with the comforts of a good hotel.

America would set the pace for trains.

Among the new wonders promised the post-war rail traveler in the very near future was a club car that miraculously converted into a rolling movie theater- a theater that traveled  90 miles an hour!

“By day,” the copy reads in this 1946 ad from the American Locomotive Company, “you’ll relax in a luxurious lounge. In the evening, you’ll sit back and watch a latest Hollywood release as you speed on your journey.”

This is no dream, but one of the many new features of trains which are in production right now. Conveniences and comforts like special playrooms for children. Telephone service for passengers en route. Roomier, more comfortable sleeping quarters than you ever dreamed of.

These improvements were all part of a modernization program estimated at $1,600,000,000- the greatest in the history of the American railroads.

“And,” the ad promised, “you’ll enjoy them not on some distant tomorrow, but as soon as the modern post-war trains hit the rails.”

Locomotives as Revolutionary as the Trains They Pull.

These super locomotives are years ahead in speed, power smoothness and economy of operation.

When you board the new wonder trains powered by American Locomotive you’ll be riding behind the finest locomotives ever built.

Another amenity to be offered by trains was childcare – just in time for the boatload of baby boomers coming our way.

“One day soon you’ll board a brand new train with the kids – and every hour of the trip will be ‘The Children’s Hour,” explained to their reader in this 1946 ad.

Mom and Dad could relax with their feet up in the comfort of their new Airfoam seats, since Kiddies were well supervised.

Skilled attendants will entertain your youngsters in a wonder room made especially for children. There’ll be building blocks, story books, slippery slides, movies, games galore to keep their trip-and yours- from being tiresome.

Children’s playroom are just one of the new features of crack postwar trains which are now going into production.

This is not a blue-sky promise.

The proliferation of automobiles, interstate highways and availability of air travel would eventually take the steam out of those modern  locomotives, and with it, that part of the American Dream.