Memories Coming Out of Mothballs

For some, the sweet perfume of lilacs drifting through open screened windows evoke spring. For me springtime can be conjured up with the toxic smell of mothballs.

These past many months as I have been sadly consumed with closing down my childhood home of 63 years, sorting and sifting through the detritus of mine and my  parents lives, the lingering smell of mothballs past has become my own personal Proustian madeleine.

I Love the Smell of Naphthalene in the Morning…

By the time of the first tulips sprouting from the soil, white crystalline mothballs would appear like magic dotting the interior landscape of my home as my mother launched her garment battle plan for the Great Spring Migration of shifting seasonal clothes to their appropriate closets.

Gathering great heaps of clothing from countless dresser drawers, cabinets and closets Mom would begin the annual seasonal schlepping of apparel from one location in the house to another.

Winter woolens were susceptible to the ravages of moths. Vintage Fashion pages from 1958 catalogue

This was all done as part of the mid-century-housewife – approved preparedness program against the onslaught of vicious perpetrators out to destroy the family wardrobe.

Winter woolens would survive…if you prepared. By late spring insatiable moths were on the prowl greedily licking their lips in anticipation of feasting on your cashmeres, woolens, and tweeds.

Unlike in my own current clothes closet that is a “closet for all seasons,” mid-century clothing hewed to strict rules and exacting locations in my parents’ house.

The recent Brown vs. Board of education ruling regarding separate but equal was disregarded when it came to apparel. God forbid a summertime Liberty of London cotton floral skirt would co mingle with a Pringle cashmere sweater set in the very same closet at the very same time.

Not in my mother’s house.

With military precision, summer’s white shoes and handbags were taken out of storage and the march of the winter woolens would begin their descent into the bowels of the damp basement for captivity in our cellar clothes closet.

As the cold war was heating up at the dawn of the 1960’s I pleaded with my parents the practicality of building a fallout shelter in our basement. To my eternal disappointment, a large clothes closet was built in its stead, the safety of a scratchy Woolrich woolen sweater from ravenous moths clearly more valuable than my own from a nuclear holocaust.

While others stayed up at night worrying about a Russian attack my mother was a bundle of nerves when it came to bugs.

Spring was opening of the offensive against insects who as scientists were telling us “are the real foes and future nemesis of man.” Insects were the bane of Moms existence…pesky flies that contaminated food and brought filth into the house, legions of ants tracking who knows what onto her Clorox clean counters.

But it was the destruction and cruelty of moths and their larvae that could decimate an entire family’s winter wardrobe in the dark of night that sent shivers down her spine.  Hungry moths thrived and grew bloated on your Fair Isle sweater or fur collared princess coat. Blankets and draperies didn’t fare any better

Like any smart housewife, Mom knew she had only herself to blame for the holes in Dad’s worsted wool suit and took protection of the family household seriously.

First line of defense in her campaign was the containment of the garments.

Containment policy was not just a cold war policy but the rule of thumb for clothing too. Once in lock down the clothes were hermetically sealed in large plastic hanging quilted garment bags of celadon green and pink.

But containment alone was not sufficient deterrent for these sneaky plotters. You needed the annihilating  power of mothballs.

Luckily science had come to m’ lady’s rescue with a powerful offensive – a lethal insect and pest repellent guaranteed to save a family’s precious wardrobe.

No longer did the lady of the house have to rely on old fashioned cedar chests in the war against bugs. No more checking for seams and folds for larvae and eggs. The deadly combination of Naphthalene and para dichlorobenzene which vaporize at room temperature packed a one two punch with the toxic fumes killing clothes moths, their eggs and larvae.

Smelling like camphor, these powerful chemicals designed to kill moths were conveniently sold in solid form such as moth balls, flakes, cakes and crystals.

Naphthalene is highly flammable and  para dichlorobenzene is now a known carcinogen. “You could trust it,” the ads promised, “to protect your blankets, draperies, and clothes.”

You just couldn’t trust it with your health. 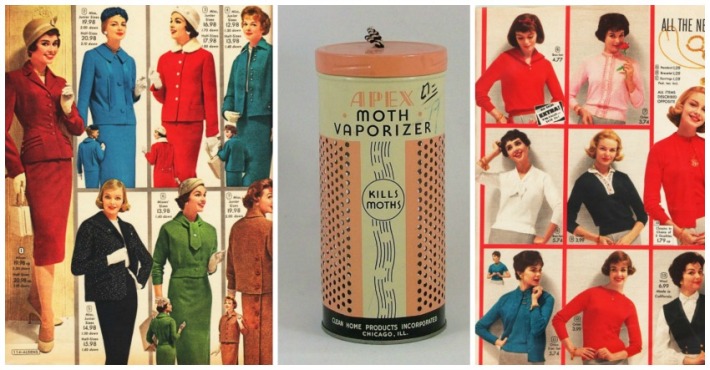 All The Proof You Need

As a young bride Mom swore by Larvex which was a moth proofing product sprayed directly on the clothes themselves and was a favorite with modern housewives. Moths, the ads claimed would rather starve to death than ingest the toxin.

Completely odorless and stainless the chemical spraying lasted a year. The results were equally as long lasting on humans.

Guaranteed as safe as DDT, the active ingredient in Larvex was Diethyl Diphenyl Dichloroethane.  DDD is closely related chemically and is similar in properties to DDT which was eventually found to be a human carcinogen.

The product left a long lasting residual toxicity that starved the moths and continued to kill for a full year. For people, the effects could be felt decades later with respiratory problems and cancer.

A favorite crystal form of the insecticide from Mom’s youth and still very popular when she ran a home of her own was Di chloricide. Made by pharmaceutical giant Merck, it not only killed moths but prevented mold and mildew. For a damp basement like ours it was a blessing.

Di Chloricide was a boon to housewives like my grandmother in the late 1930’s when it first appeared. Nana Sadie could be free from worry over moth damage when she put away her winter clothes. In the top of each garment bag my grandmother placed a small cheesecloth bag filled with Di chloricide crystals (the cheesecloth bag came with every can) and she could rest assure her garments would be safe until she needed them. 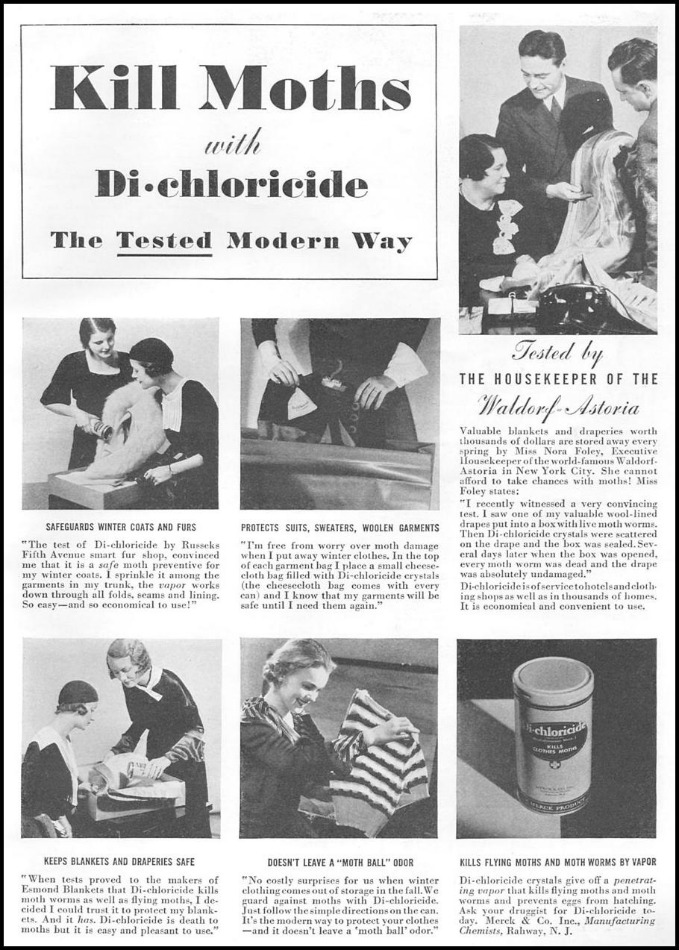 It’s the modern way to protect your clothes- and it doesn’t leave a “moth ball odor.” The carcinogens acted odorlessly . Vintage ad Di-chloricide 1935

My grandmother was impressed as the product came with a ringing endorsement not only from the head housekeeper at the Waldorf Astoria but with the seal of approval from smart Fifth Avenue furriers.

Yes Di chloricide is death to moths, but it’s very easy and pleasant to use,” the copy reads in this 1935 ad. Di chloricide crystals give off a penetrating vapor that kills flying moth and moth worms. Just sprinkle among the garments in your trunk the vapor works through all the folds, seams, and linings.”

The vapors also worked thru the lining of your throat and esophagus.

The active ingredient Dichlorobenzene is a carcinogen that affects the respiratory system and breathing and repeated exposure can damage nervous system, cause trembling, and damage lungs, liver, and kidneys.

“Ask your druggist for Di chloricide today,” the ad implored the reader.

You’ll be seeing him years later for all the health problems you might develop.

As the years went on the basement clothes closet was not sufficient to contain all my parents’ clothes, which is perplexing given that neither of my parents were clothes horses.

My parents had clothes literally hanging from the basement rafters, garment bags hanging on steel beams and any horizontal support,  bulging with clothes from seasons and years past precariously dangling from old copper pipes on the precipice of bursting.

Growing up when there were two growing children living in the house, clothes seemed to be well contained in their owners appropriate closets, but once my brother and I moved out, it was a clothes lollapalooza as my parents attire encroached on our now empty closets and ran amuck in the basement.

In full transparency, some of these garment bags hanging from rafters contained my clothes from the 1970’ through the 1980’s when I lived in smaller apartments and thus never enough close space.

I deposited my clothes in suburbia and never looked back. Until now. 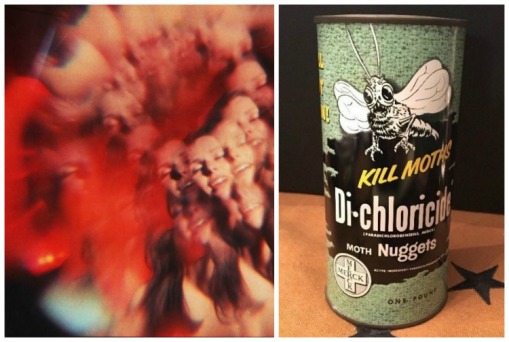 Now it is a tangle of hot pants and Huck-a-Poo shirts, wrap dresses from Dianne Von Furstenberg and lace punk dresses from Betsy Johnson. They would reside there out of sight and out of mind for the far off day when I would eventually retrieve them.

That day has come as I am emptying out the house. The residual smell of mothballs still permeate the basement. Like the memories it brings up,  the toxic vapors stay with me long after I have left. So does the wheezing cough I have after every visit.

Along with the tears.