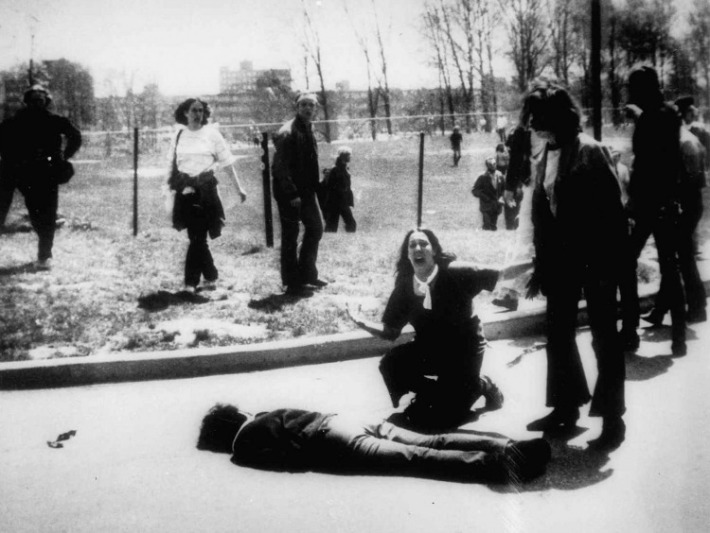 In the spring of 1970, nearly 50 years before the tragic school shootings at  Parkland, Sandy Hook, Virginia Tech, and now Highlands Ranch, the country had been shaken to its core by the senseless shootings  that took place at Kent State University when Ohio National Guardsmen leveled their loaded guns, aimed, and fired into the crowd of unarmed college students.

Capt. On May 4 1970 Ohio National Guard was sent to break up an anti war protest at Kent State University. It ended in 4 dead wounding 9 others.

As a 15 years old trying to make sense out of a senseless act,  I could never have conceived of a time when a place of learning would not be considered a safe haven. 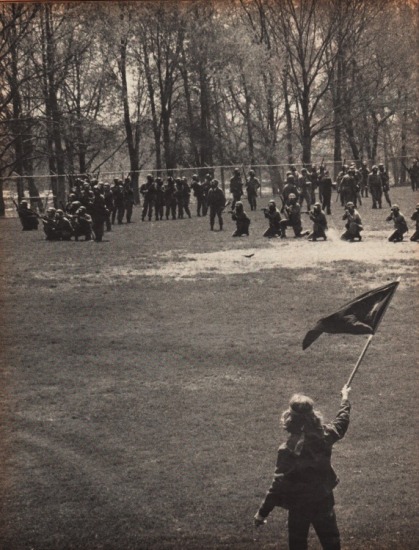 May 4th, 1970 began as an ordinary Monday in an extraordinary time.

The Vietnam war had polarized the nation. On college campuses across the country where anti-war sentiment ran high, protests were erupting in reaction to the recent bombings in Cambodia.

In late April the U.S. had secretly invaded Cambodia widening the Vietnam war. On Thursday night  April 30th President Nixon announced to Americans on a televised addresss that we would expand our forces into Vietnam’s neighbor.

For those who already saw the war as inhumane this was the last straw. Protests occurred the next day.

That Friday,  Kent State, like other colleges, held an anti-war rally. Fiery speeches against the war and the Nixon administration were given, and a copy of the Constitution was buried to symbolize the murder of the Constitution because Congress had never declared war.

Another rally to he held on the commons a large, grassy area in the middle of campus was called for noon on Monday, May 4. 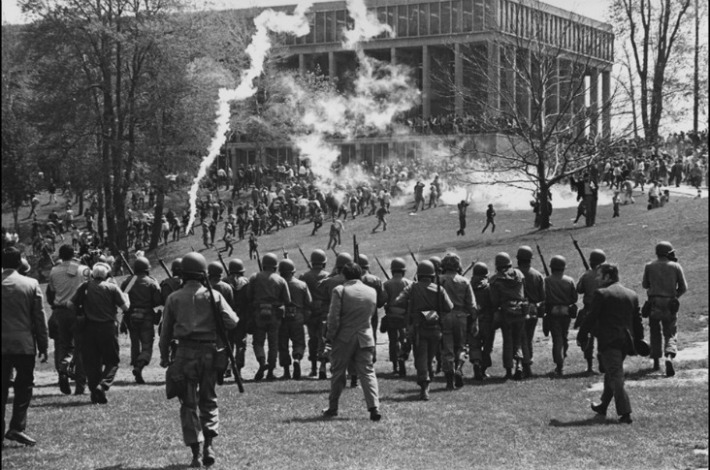 As a sophomore in a high school, my Monday would be very mundane.

I had just finished my third-period social studies class at noon and was headed for the cafeteria. While I was mindlessly picking at my usual dieter’s lunch of Friendship cottage cheese and Jello,  an anti-war protest in an Ohio college was turning violent and deadly. While my friends and I speculated on that night’s Laugh-In’s lineup, National Guardsmen opened fire from powerful M1 rifles on an assembled crowd of college students unleashing 67 live bullets in 13 seconds killing  4 and wounding 9 others.

In a world before social media and without 24/7 news, I would be oblivious to the tragic events at Kent State as  frightened college students scrambled, running for their lives.  For now my sense of disbelief centered on the breakup of our classes most popular couple.

That evening I would learn about the bloodshed  at Kent State from Walter Cronkite, just as I had so many other tragedies.

“Some people here believe the Guard, under the pressure of a rock throwing attack, fired its weapons indiscriminately, killing four people,” CBS News correspondent Ike Pappas reported from the scene.

The protests began after President Richard Nixon announced the invasion on Cambodia. Students rallied on campus over the next four days, at one point setting the ROTC building on fire and rioting in downtown Kent.

The Ohio National Guard was called in, and school officials banned a rally planned for May 4th due to the potential for more violence.

But the students still gathered as planned. After repeated warnings to disperse, tear gas canisters were fired into the crowd. Eventually, more than seventy troops advanced on the students. Tensions escalated, and twenty-eight guardsmen fired their weapons into the crowd of demonstrators. 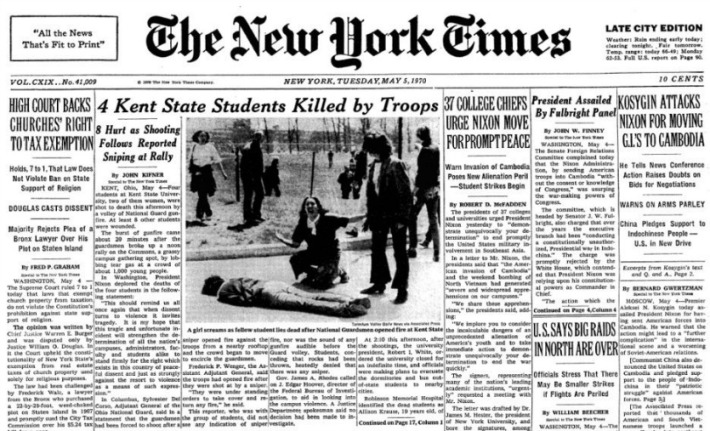 The next day the graphic image of a tormented teenage girl screaming in horror as she crouched beside the fallen body of a Kent State student who had just been shot,  would appear on the front page of every newspaper. This seminal photo by John Filo would forever define that event for me and countless other baby boomers.

We learned the  name of the kneeling girl with the neckerchief was Mary Ann Vechio. The fallen student was 20 years old Jeffrey Miller.  At 14, the anguished girl was remarkably close to my own age.

Seared forever into my consciousness, this haunting image now joined those other iconic black and white photographs that defined my childhood. A grimacing Lee Harvey Oswald grasping his belly after being shot live on TV by Jack Ruby. A fatally wounded Robert Kennedy staring wide-eyed as he lay sprawled on the floor of a hotel kitchen, his head in a pool of blood from a gunshot.

Baptized at an early age by senseless bloodshed, violence and guns would chase me my whole life.

But this tragic event felt different. Now it wasn’t just our leaders being shot. They were coming for ordinary Americans. We too were in danger and we couldn’t count on our government to protect us. They were the shooters now.

These fallen students, teenagers  were only a few years older than I was . If it could happen to them… 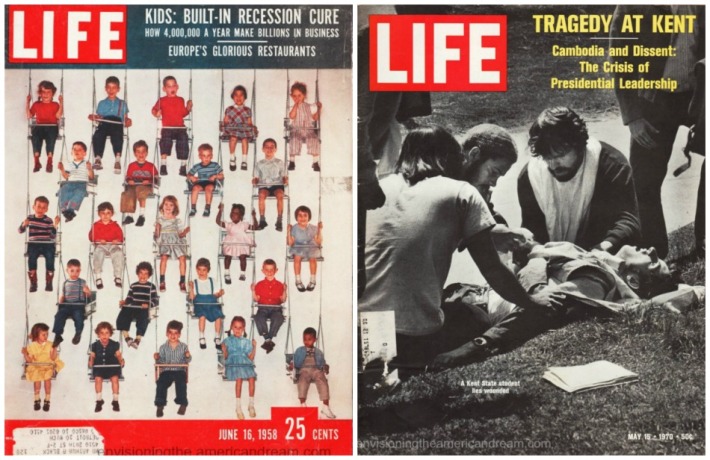 Kids who like me had grown up watching Howdy Doody, played with Barbies, read MAD magazine and dotted their faces with Clearasil.  Kids who had been traumatized by the events in Dallas. And Memphis. And in Los Angeles. Imobilized in our living rooms watching traumas unfold on television plunged us  into a collective electronic mourning.

These were kids whose fathers were ex GIs who had fought in the Greatest War and were providing their children the post-war American Dream; whose mothers  joined the PTA, baked Betty Crocker Cake’s from a mix  and curled their hair with a Toni Home Permanent.

These kids played war in their suburban back yards certain that the good guy always won, that right was always on our side. Just like me. These boys and girls at the anti war rally were the last generation to celebrate war as children with their toys guns in the streets and backyards fighting Nazis, and their  toy soldiers acting out the American wat story with bags of olive green soldiers redeemable with a dime and a cereal box top from Kelloggs. 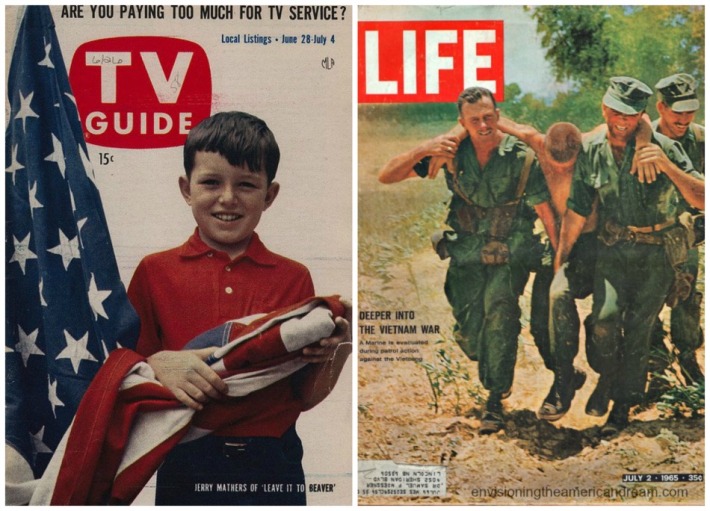 These kids grew up like me believing in American exceptionalism. It was an act of faith like reciting the pledge of allegiance. Before being disillusioned by Vietnam we believed in the beaches of Normandy.

But the answers of 1945 dissolved so quickly into the nagging questions of 1965, when these same children began to come of age. They came to doubt their country. The Great Society wasn’t so great after all. Vietnam was immoral.

These children of the suburbs who had once taken the American story to heart in movie theaters, on TV, and in backyards now felt deeply betrayed by the media image makers and our government.  It had always been a matter of faith and the loss of that faith was wrenching. Betrayal by our  country, morphed into disbelief. 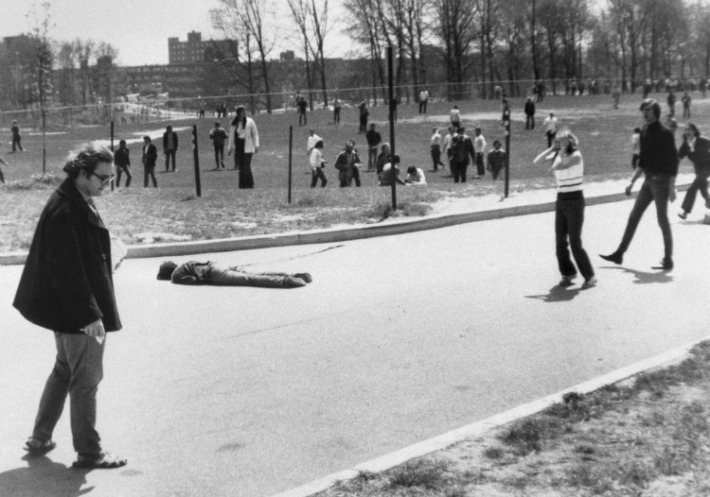 Now unbelievably, they were killing these kids. Kids like me.

In that moment at a little past high noon on an ordinary Monday in May the unthinkable became real. Surely though this was an aberration, an extraordinary, isolated moment in history during a tumoltuous time.

In 1970, my 15-year-old mind could never have imagined a time when school shootings would become part of our culture.

But now the exception has become the norm. The killing of school children has become commonplace.

We have long lost our faith.

And shots are still being fired.

The spring of 1970 saw the first general student strike in the history of the U.S. Students from over 400 colleges and universities called off classes to protest the invasion of Cambodia,, the war in Vietnam, the Kent State shootings, and the killing of 2 black students at Jackson State College in Mississippi which occurred May 14-15. A group of student protestors were confronted by city and state police who opened fire killing 2 and injuring 12.

Only 10 days after Kent State it didn’t get the same attention.