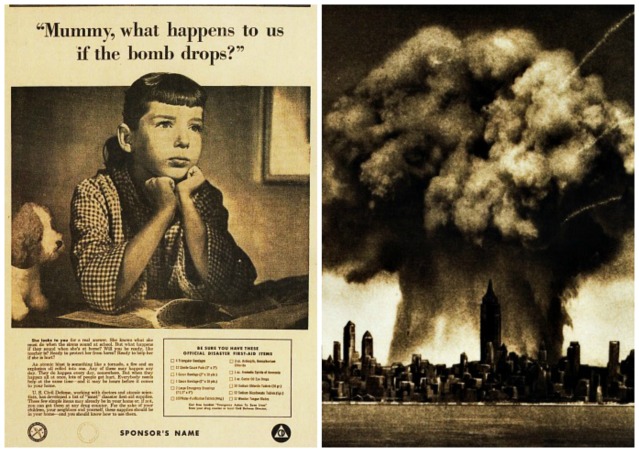 (L) A public service newspaper ad produced by the Advertising Council, advising mothers to be prepared with an assortment of first aid materials should a nuclear bomb attack occur. (R) A government illustration superimposing an Atomic Bomb Test over the NYC skyline to indicate the scale of the blast.

As the tensions mount in the Korean Peninsula, with the nuclear sabre rattling mounting in North Korea, old fears are renewed. For those of us who grew up during the 1950’s and 1960’s the fear of nuclear attack was the subtext of our lives. Nothing matched the profound fears that gripped our country’s fear of a cold war turning hot.

It was a time when most Americans assumed the U.S. and the Soviets stood continuously on the brink of nuclear war.

Memories of growing up duck and covering didn’t just flood back- they are always lurking in the recesses of my mind.

In the post-war world of push-button ease and no more guess work, it was anyone’s guess when the ultimate button would be pushed and nuclear war begin. “How much time do we have, minutes, days, months, years? We don’t know.” a somber male voice asked on a public service announcement. “But this we do know- Civil Defense is everybody’s business.”

Fueling our prodigious  fears was the emphasis on Civil Defense and the governments zeal in educating the public about the risk of an atomic attack- how you could survive one, and how to plan and pack for the few days you and your family would have to spend in your fall out shelter.

Civil Defense is the  Best Defense

Lucky for me my own Dad was well versed in the art of preparedness, a lesson I would learn at the tender age of 14 months.

If it was a Wednesday night  in 1956, it meant Dad would be out for the evening at his weekly Civil Defense meeting. My father was Marshall of Civil Defense for all of western Nassau County- and part of his job was conveying helpful information straight from the Department of Defense to groups of concerned citizens with a good case of atomic jitters.

Standing in for folksy, Uncle “Aw shucks” Sam, the talks were composed of neighborly suggestions on how to protect yourself and plan now for possible emergency action if the moment of Atomic attack came.

These evenings were exciting for Dad and it was flattering to be summoned to speak before groups and large public gatherings, not to mention being courted by The Long Island Press reporters. He gave his speeches in churches, club-rooms, school auditoriums, similar to the hundreds of public meetings that gathered all over the country for the same purpose.

The audience listened intently, a dense cloud of fear enveloping them as they drifted off into the seemingly safety of the quiet suburban night. In reality these talks did nothing to dampen fears, and only underscored how very unprepared we were. 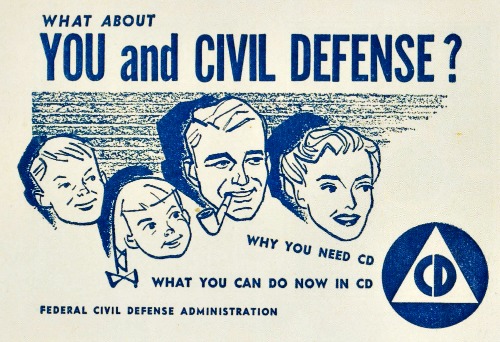 An early 1950s Civil Defense booklet asked the question “Can we survive a grand slam attack on our country? And the answer- “Certainly! If we are prepared on the home front!”

One unusually warm night in May, Dad was off to a local Kiwanis Club in Rockville Center. He was handsomely dressed in his medium gray, sharkskin suit with the harmonizing over-plaid. It was authoritative- style wise… “planned,” the salesman at Moe Ginsberg who sold him the suit had said, “for men whose clothes must reflect their sound judgment.”

It was, the perfect suit in which to deliver his talk.

Despite the fact that he had gone over his speech all weekend with Mom till her poor eyes glazed over, he still seemed in need of an audience to practice just once more. With Mom indisposed preparing dinner,  mine were the only willing set of ears in the house.

Captive in my crib, Dad delivered his speech to me with the intensity of a campaign stumper.

Rustling his papers, he began his lectures as he always did, stating the obvious-. Civil Defense was Common sense.

“A few days ago I was talking with the Director of Civil Defense,” he’d begin all sunny and cheerful, “and he told me things that I feel everyone should know.”

Dad was as folksy and breezy as if he were leaning over his neighbors picket fence discussing the best fertilizer for your lawn. “That’s why I’m speaking to you right now.”

With a confident lilt to his voice he would inform his audience “Did you know, for example, that your chances of surviving an atom bomb are excellent? It’s true, but there’s a big if . You must do everything possible now, to help yourself and your family. Nobody else will help you! Learn and Live through civil defense.”

The government provided him with lots of snappy phrases like, “Alert Today, Alive Tomorrow” that peppered his talks with the persistence of a Pepsi jingle.

In case of an H bomb blast the Atomic Energy Commission offered some easy advise:

“People in fall out areas can protect themselves by following some simple rules they suggested reassuringly, “The news of an H Bomb attack will be announced over the radio and most people will know about it before the veil of stinging dust comes settling down out of a clouded sky over farm, forest and village.”

“So until then, enjoy the freedom to live as you please.”

“Listen, because this is important!” he scolded.  “Keep a closed container of drinking water in your refrigerator, enough for three days. Be sure you have a good fire extinguisher.”

“Take a look around your house right now and pick out the safest spot, away from windows and doors. Make sure every member of your family understands he is to rush to that safe spot when there’s danger. I’m convinced that these precautions are necessary right now and I hope I can convince you. Civil Defense is common sense.”

Slapping the side of the crib  to emphasize his point, startled me and I began to cry.

Spying my brother Andy’s Tuggy Turtle pull toy laying on the floor, Dad scooped it up and wiggled it playfully, trying to distract me from crying. Inching the toy turtle around the perimeter of the crib- Tuggy’s little legs lazily shuffled as his tail wagged to a xylophone tune- Dad sang to me in a playful squeaky voice:

“There was a turtle by the name of Bert

And Bert the Turtle was very alert

When danger threatened him he never got hurt

He knew just what to do”

Dad quickly moved the turtle in and out of my sight range and I giggled as he continued:

He’d hide his head and tail and four little feet

Kissing me gently as he left, he tickled me and whispered “Civil Defense is Common  Sense.” Snug as a bug in my crib, my own private fall out shelter, I clutched Tuggy the Turtle with his unbreakable shell and giggled in delight.