I never met Robert Kennedy but I was always grateful I was able to bid Bobby a final goodbye.

On a sweltering Friday in June of 1968, I joined the hundreds of thousands who lined up outside St Patrick’s Cathedral in NYC to pay their final respects to their fallen hero.

Americans were in a state of disbelief.

It could not happen again – yet there it was. With terrible symmetry an assassin had struck down Robert Kennedy early in the morning of June 5th and once again a nation was left to watch and grieve and wonder.

The awful drama that had played out on TV the past few days had left us all, young and old, feeling lost and helpless. The Kennedy family had flown his body from California to NY where he would lay in state at St Patrick’s Cathedral giving the public an opportunity to pay their respects on Friday.

Like millions of others engulfed by the drama of those past few days, I needed to touch the event myself, to establish even the smallest piece of it as having taken place in my presence, to see it and believer it and lock it in personal recollection. As a 13-year-old who had volunteered my afternoons working on Kennedy’s Campaign for President it seemed essential.

A half hour train ride to Manhattan from my suburban home was all that was necessary.

Long before my mother and I boarded the Long Island Railroad that Friday morning, the lines of mourners had already begun forming. By early morning when the St Patrick’s Cathedral doors swung open, the line of mourners was already swelling to well over a hundred thousand waiting in the early morning humidity.

Simmering in the June heat, the crowded city streets were bustling with commerce as Mom and I made our way uptown to St Patrick’s from Penn Station.

I loved Manhattan with the noise and grime and glitz and especially the kaleidoscope of people.

Swinging down crowded Madison Avenue lined with skyscrapers and smart shops, girls rushed to their glitzy secretarial job to fetch coffee and type 60 words a minute on their IBM electric typewriters.

The Real Mad Men of Madison Avenue fresh off the 7:37 from Greenwich were sprinting from Grand Central in giant strides to make their 9:00 meetings.Wrinkle free and fresh in their summer weight Dacron suits,nothing announced to the world that you were a man of discerning taste the way a garment of 100% Acrilan did.

By the time Mom and I arrived at St Patricks, the lines were strung out over 6 and 8 and 10 abreast over 25 blocks of mid-town Manhattan forming a vast chain of sadness. The crush of people was overwhelming.

The vibrance of the crowd belied the sorrow that loomed over us all It was a crazy crush of color happy Celanese separates, vibrant in sun coral, refreshing in turquoise and electric in jubilee orange.

The sun was baking down and the crowds were wilting from the 90 degree heat but their no wilt, wrinkle-free clothes looked as  fresh as the zingy floral prints, popping polka dots and pastel paisleys that decorated them.

A wave of humanity in a sea of synthetics. It was a veritable sea of drip dry, and wrinkle free, a wash n’ wear tribute to Postwar man’s progress over Nature, a cornucopia of the space age convenience of miracle man-made fabrics.

(L) In the heat, some of the 150,000 mourners were offered water while waiting their turn to view RFK’s casket at St Patrick’s Photo: Life Magazine Special Edition The Kennedy’s 1968 (R) Robert Kennedy Memorial Issue M.F. Enterprise 1968

Out of some deep sorrowing patience they stood all day in a wilting sun and through a stifling night – an amalgam of populace from all walks of life.

Heartbroken housewives from Bayridge Brooklyn, a gaggle of amber waves of trouble-free Toni home permanents that had not unfurled in the humidity stood side by side with Park Avenue doyens fresh from their standing Friday hair appointment at Kenneth’s, that flawlessly tailored pet of the set who flocked  to his posh paisley swathed town house at 19 East 54th Street.

Ladies who lunched,  their red-rimmed sorrowful  eyes hidden behind their Foster Grants who stopped by after a quick run through at Saks Fifth Avenue, shared space with teens with ravaged faces splotched with skin colored Clearasil, teens with angry sunburns gotten the weekend before on Memorial Day, teens,who like me had taken the day off from school.

Nuns, shrouded in black in their austere habits, their normally stern moral certitude shattered, mindlessly fingered rosary beads, lined up next to weeping girls in mini skirts and Dynel wigs their Maybelline mascara running copiously down their cheeks.

Grief stricken ex-GI’s and their blue cheer whiter-than-white families living the second generation of American subdivision dream, stood shoulder to shoulder with Blacks from Bedford Stuyvesant, that God forsaken urban blight of burned out houses, forgotten by all except Robert Kennedy.

Hundreds of them came from Bed Sty, leaving  the sour stench that permeated the Myrtle Willoughby IND subway station for the rarefied air of Fifth Avenue. To honor the man who had worked so hard for them.

Some were activists and community leaders  from that beleaguered community second generation victims of urban poverty, now mournfully reminiscing for anyone within earshot, of their brief encounters with Kennedy.

Some  had been there that cold day in February 1966 accompanying RFK in his historic walking tour of Bedford Stuyvesant . Kennedy had seen it all, unvarnished, the  burned out buildings, the brownstones in abject decay, plaster falling from walls,,vacant lots teeming with garbage, the  stripped cars rusting on the streets.

One woman standing next to us, resplendent in her Sunday best,  wept openly as she recalled to Mom and me  how only last June Senator Kennedy had been in Bed Sty, and she along with several hundred people had crowded into the courtyard of an abandoned milk bottling plant to listen to among others, Senator Kennedy speak.

The purpose of the gathering was the announcement of the Bedford Stuyvesant Restoration Corporation, the nations first community development corporation that would try to regenerate Bed Sty. She would never forget that day or the warm handshake  and sense of hope she received from Senator Kennedy. It was the first bit of hope for Bed Sty in decades.

No, he had not forgotten them. They would never forget him. 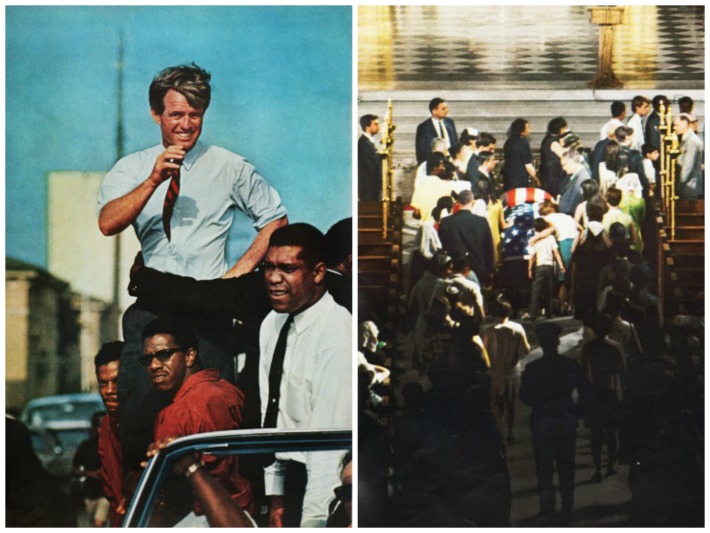 For 6 hours we all stood and waited for a seconds glimpse of the coffin with the white wreath at the feet, the spray of roses at the head, the US Flag and the rosary on the burnished lid.

Some snapped cameras. Some touched the wood and crossed themselves.

Four hundred fainted. A stout black woman collapsed before the coffin sobbing. “Our friend is gone, oh Jesus he is gone, Jesus, Jesus.”

Members of the family appeared only briefly during the day- Ethel in black kneeling at the coffin and touching the flag, her eldest sons Joseph 15 and Robert Jr 14 taking their turns in the honor guard, Teddy pale alone into a fortieth row pew

It was mostly a day for the Bobby people- the young the poor the black, the disenfranchised. It was the day the family gave Robert Kennedy to the public for the last time.