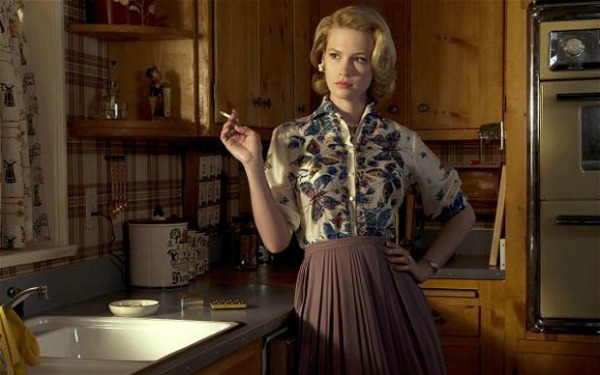 Like another Sally Beth, I too had to eventually bid my own Betty goodbye.

Though thankfully my own mother would live decades longer than Mad Men’s poor Betty Francis, as a teenager I witnessed the beginning of the slow demise of the happy homemaker.

Under the glare of the Women’s Movement, I watched as the job my own mother Betty and millions of her generation had performed devotedly suddenly become devalued. 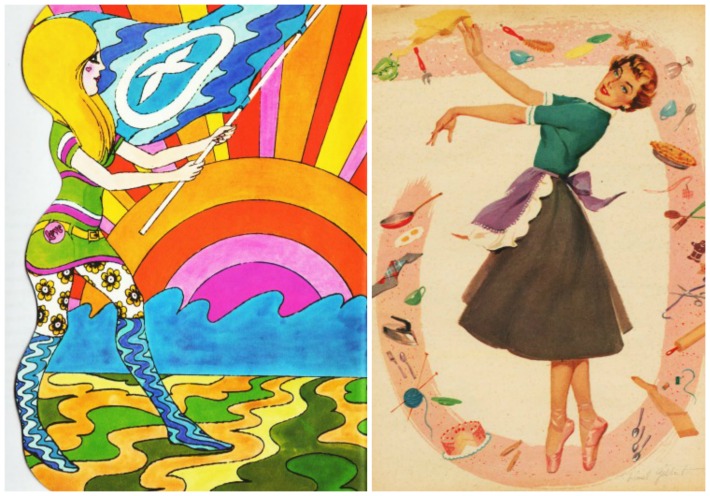 During this period these women had seen all their own rules about love sex marriage, femininity and child rearing, overturned. They could hardly act as wise guides to their daughters as the gap was becoming too wide.

Scrutinized and trivialized the happy homemaker was characterized as trapped in a menial service job for which she didn’t get paid. Receding in relevance, she was replaced by the new liberated career girl.

Paradoxically in trying to liberate women and bring them the respect and opportunities they deserved, 1970s feminists devalued women’s traditional roles.

1970 sounded the death knell of the idealization of the Happy Homemaker.

The job a generation had diligently trained for became obsolete. Marriage let alone motherhood was not a high priority for the woman’s libber. 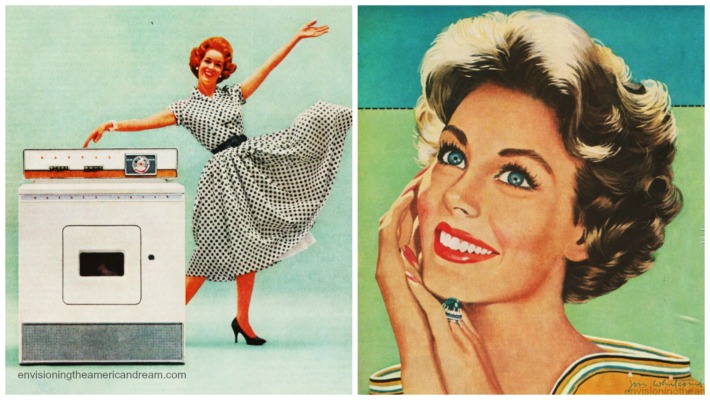 Though Betty Francis, the former model turned mom was no model Mother, she was the epitome of the ideal mid-century housewife.

Beguilingly feminine in her cascading, stay-fresh bouffant dress nipped to a tiny waist, she went about her household tasks smiling like she hadn’t a care in the world.

It was to be a life of self polishing ease, of no rubbing, no scrubbing, no waxing, no buffing,with twice the shine in half the time; a wash and wear world of no stretching, no stooping, no bending, and absolutely…no complaining. 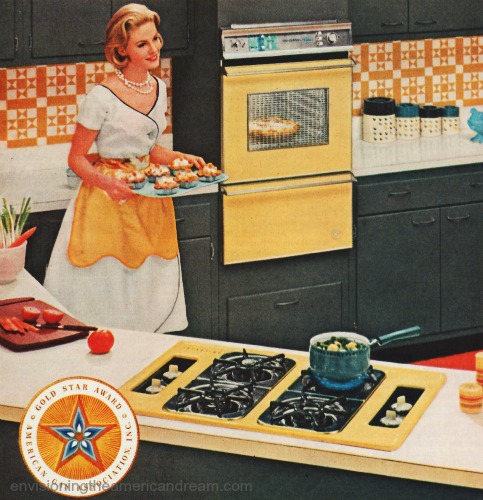 The mid century housewife knew in her heart- because all the magazines confirmed it to be so – that love, marriage and children were The career for women

The real Mad Men of Madison Avenue would have us believe that no one was the beneficiary of the cold war culture of casual carefree living more than the housewife of the 1950’s and 60’s.

The most envied woman in the world was the Post WWII American Housewife..smart…yet easy going with never you mind freedom. That was the new Mrs. America.

All manner of unparalleled ease from cleaning products to appliances promised the happy homemaker a life transformed, a life so carefree you could do as you please. So undemanding, it was a world of child’s play, so easy it turned routine into fun. 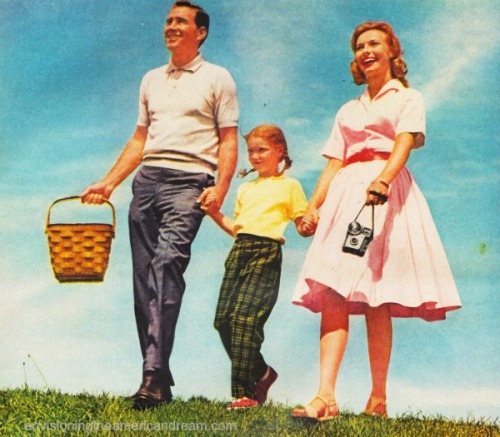 The happy homemakers life would be a carousel of Kodacolor memories

Her life was magical this bewitchingly new American housewife.

“Mrs. Housewife” advertisers boasted “your judgment and testate helped make Americas standard of living the highest in the world.

Her home is her castle. Snug within it she basks in the warmth of a good mans love, glories in the laughter of healthy children glows with pride with every acquisition.

For the up to date mid-century American housewife and helpmate, pretty and perky dressed in a festive apron and a fresh coat of pretty in pink lipstick, it was a life of comfort and convenience, flameless, frost-free, touch-tone, push button ease. 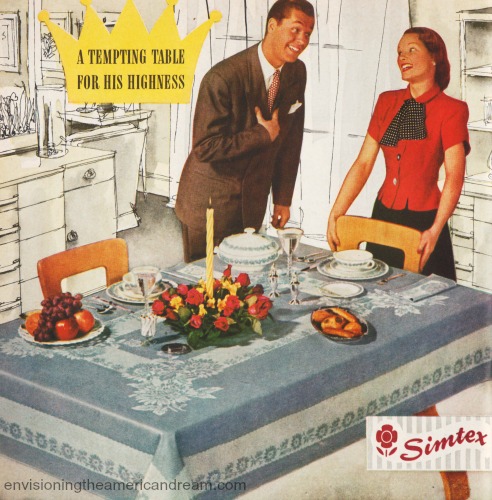 Setting a table fit for a king

With everything so automatic no wonder she looked to a man to be in control. Despite this life of ease, she seemed often to be a damsel in distress waiting to be rescued by Dudley Do-Right.

For a successful marriage it was important that the proper cold war corporate wife understand the tensions of her husband’s job as breadwinner. When it came to who was in the driver’s seat there was no question who was in charge. 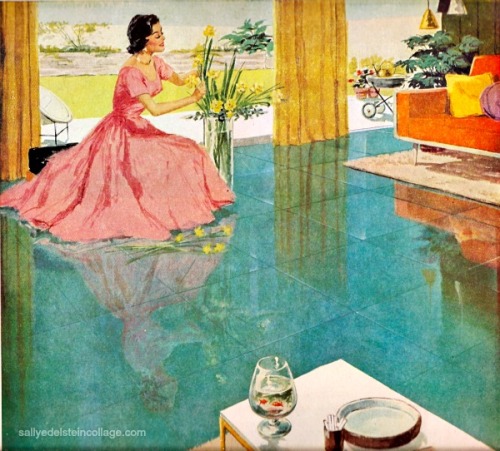 A beautiful floor with no waxy build up was a clear reflection of your skills as a homemaker. Vintage Glo-Coat advertisement

With their gleaming Ipana smiles the  happy homemakers asked nothing more of others than to refrain from scuffing up the shine on their freshly Glo Coated floor.

Though the atmosphere of the early 1960s was one of infinite challenges, women were still chained to their Electrolux vacuum cleaners chasing dirt, debating the well-worn topic of ring around the collar and exchanging the latest busy day Jell-O recipes while men joined the Peace Corps to save the world.

While others were out marching for Civil Rights in the 1960s fighting the break the color barriers hermetically sealed housewives were cheerfully living a colorfast world obsessed their wash n wear laundry was not white enough. 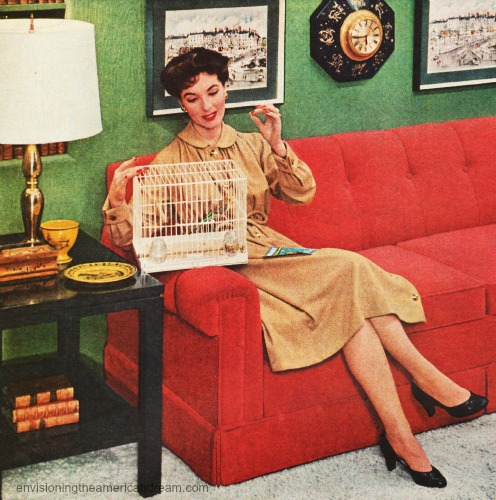 Now I Know Why the Caged Bird Sings

As discrepancies began to appear, the New Frontier would pave the way for Feminism as happy housewives were discovering how unhappy they really were.

During the cold war, the culture of containment was not just a foreign policy but applied to women and their identities as much as it did to the Soviets. Women were to contain their aspirations, their appetites and their bodies

In a world rampant with wars rioting and male entitlement these happy housewives may have been smiling but more than likely they were numb from Miltown or Valium.

The problem that had no name was quietly being spoken about, in beauty parlors, and suburban kitchen across the country
Like underground nuclear testing, anger was to be buried underground, beneath the surface, but the fallout was soon to appear.

Before the decade was out, women would become as agitated as their miracle two agitator washers.

The End of Camelot 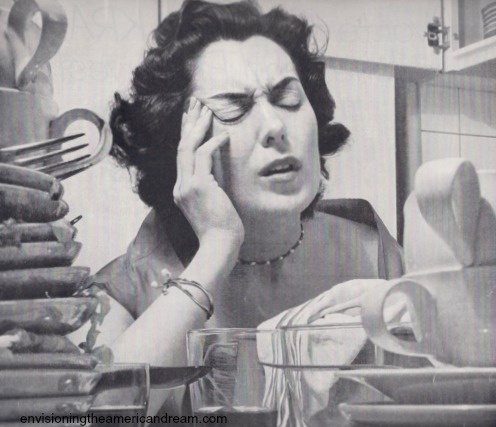 The New Frontier years of Camelot came to a crashing halt and turned out to be just one more fairy tale.
It wasn’t long before the spell was broken and we realized not everyone would love happily ever after like Cinderella.

The only shining white knight coming to the housewives rescue would be the Ajax White Knight galloping into her suburban neighborhood destroying dirt in his path with his magic lance. 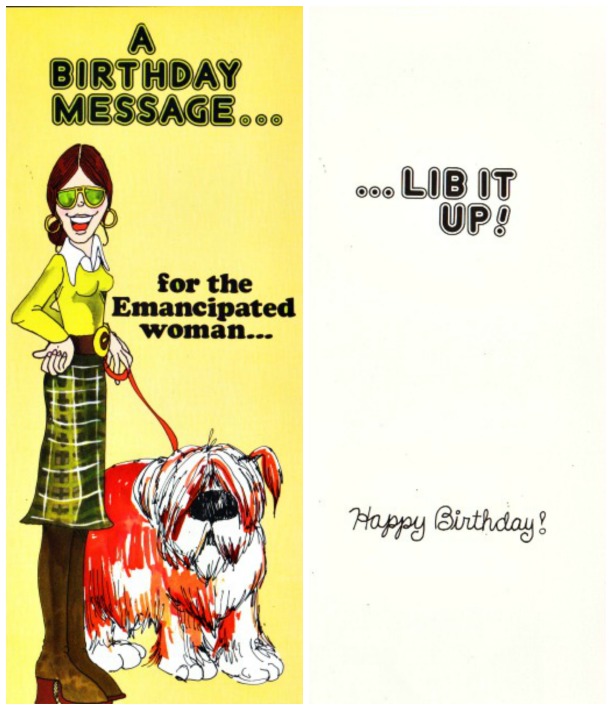 By 1970 everyone was rapping about the new liberated woman and her newly raised consciousness.

Suddenly Happy Housewives with their smiling glowing faces shining with pink pancake makeup in harmonized shades keyed to match their appliances, were like those same retro appliances, replaced for a newer model.

The single gal exploded on the scene knocking the married housewife off her pedestal. Ads proclaimed “It’s your time to shine baby and we don’t mean pots and pans.”

The nuclear family detonated along with our notion of marriage and motherhood. As if hit by a strong dose of radiation the familiar 50s nuclear family in the media had mutated into monstrous families as June and Ward Cleaver were replaced by Lilli and Herman Munster.

Parenting and partnering were not priorities for the newly liberated lady. An article written by Betty Rollins published in 1970 in Look magazine said it all: “Motherhood:Who needs it?”

With the bewitching speed and ease of Samantha Stevens twitching her nose, the job a generation of women had trained for was suddenly obsolete by the 1970’s. Along with their bras, women’s libbers threw out the American housewife and June Cleaver got kicked to the curb.

How to Spot a Feminist

Can Betty Draper Tune in With the Now Generation