The Danger of the “Other” 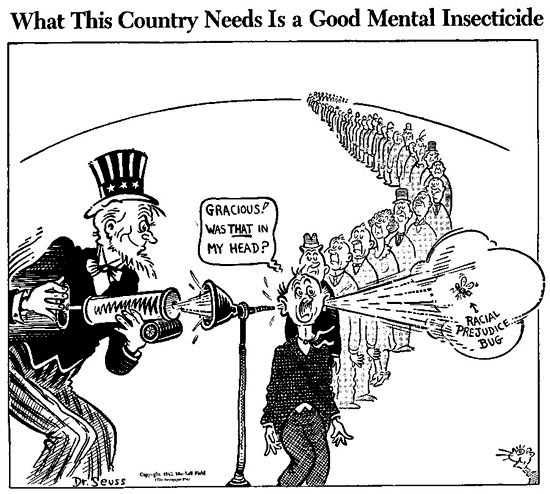 Learning from our past history,  America could use a good dose of mental insecticide to vanish the racism and vitriol that has been infecting our country recently. 1942 Political cartoon by Theodor Geisel – Dr. Seuss, from NY newspaper PM.

We need to be on high alert

The threat is real.

We need to be vigilant not only about extremist terrorists who wish to do us harm, but about the ramped up stereotyping and creeping xenophobia that is growing, thanks to the red white and blue home-grown extremists like Donald Trump whose vile comments cloaked as patriotism are becoming numbingly familiar.

Both threats are real…both are dangerous…both pose a grave danger to American freedom.

Against a boosterish backdrop of cheering crowds, Trump announced his plan to make America great Again by banning all Muslim’s from entering our country, beaming at what he saw as a public service.

Encouraging the public’s vigilance to keep their round eyes peeled for Arabic speaking neighbors and hijab wearing plane passengers, his solution would keep people safe.

A How-To to determine turbaned friends from terrorists. This “Turban Primer” originally appeared in a Chicago publication Redeye in 2012, two days after a gunman shot and killed 6 worshipers at a Sikh Temple in Milwaukee. Image: Redeye 2012

Since turban wearing folks seem to confuse to most Americans, unable to distinguish between a Sikh or a follower of Islam, how exactly would we know which tourists and immigrants are Muslim?

Easy as apple pie and just as American.

Airline representatives, custom agents and border guards would simply ask folks for their religion, Trump explained matter of factly. “They would say; ‘Are you a Muslim?’” Trump said on MSNBC’s Morning Joe Tuesday morning. If they say no, they’d be allowed in the country.

Identifying tourists and immigrants as the “other” seems so simple, it’s a wonder no one has thought of it before.

An anti-Japanese political cartoon by Dr. Seuss. From 1941 to 1943 Theodor Geisel created more than 400 political cartoons for NY Newspaper PM. Along with subjects such as racial discrimination and social injustices, he did create anti-Japanese propaganda and supported Japanese internment. After the war he questioned his beliefs about the Japanese. Years later Dr. Seuss wrote “Horton Hears a Who” ( a metaphor for American postwar occupation of Japan) in part as an apology to the Japanese that he had demonized during the war.

Identifying the “other” has long been a stock in trade in a racist America.

A panicked American public consumed with fear from a recent December terror attack is something we have witnessed before. The demonization of Japanese Americans during WWII could serve as a history lesson in what happens when racist propaganda is disseminated as patriotism .

And it didn’t take long.

A mere two weeks after the attack on Pearl Harbor, a racist guide geared to the hapless American to differentiate a Jap from the Chinese was published in two  highly respected periodicals Life Magazine and Time as a public service to a frightened public. 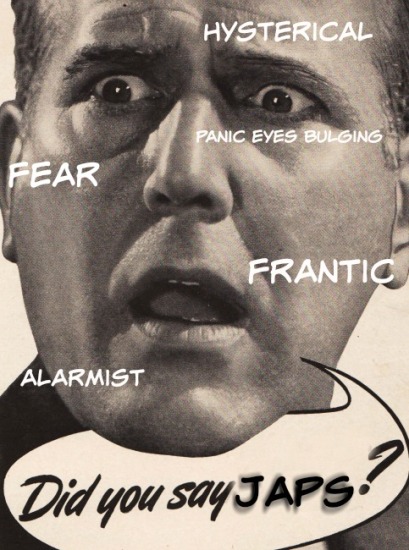 Like most Americans in December of 1941, Bob White was in a state of anxiety. Shaken to the core by this violent act of terrorism perpetrated against America in Pearl Harbor , he was left confused. Like others Bob simply didn’t know who to trust.

This native of Newberg worried…was the Chinaman washing his shirts really Chinese or a Japanese spy. Maybe the Oriental whose family fix-it shop had been there for generations might be sending signals back to Tojo. Who could tell if they were even Japanese?

Life magazine understanding this confusion came to his rescue.

In a world of insecurity and uncertainty, Bob White could count on 3 things. A white Christmas, the regular delivery of the U.S. mail and the reassurance from his favorite magazine Life.

Like most Mondays, Bob looked forward to his weekly copy of Life, the eyes and ears and voice of America to entertain, inform and instruct him.

But this December 22 was not like most Mondays. Only 2 weeks earlier President Roosevelt had appeared before Congress  asking them to declare war on Japan. The date that would live in infamy was fresh in  American minds.

So when the doorbell rang at noon, Bob could count on it being the mailman making his delivery. As Sam the mailman shook off the snow and handed Bob his weekly copy of Life, he smiled and said winking: “It’s a keeper!”

Long May She Wave

Bob’s heart swelled with pride at the image of the majestic waving American flag that filled the cover of the magazine.

Flipping through the thick periodical he pored over the graphic photos documenting the devastation from the attack in Hawaii, fueling his hatred of the cruel and barbaric enemy. The jingoistic copy confirmed what Bob knew in his heart – harnessing America’s might we would pull together to beat the Japs!

Reading onward, his eyes fell on the bold-face heading  “War and Terrorism” under which he noted a series entitled “The Handbook for Americans.”

This former Eagle Scout knew that to win this war both on the battlefield and on the  home front, Americans needed to be prepared.

Americans needed to mentally awake and morally straight and most importantly, keep informed.Like any good handbook this one offered practical, useful information.

The first article in the handbook was a handy guide for identifying dangerous Japanese warplanes.

But more urgent than the planes was the vital information on how to identify a Jap.

Yes, not only does the reader learn to recognize enemy Jap warplanes, identifying them by their unique markings, they learn to distinguish Japanese Americans from Chinese Americans.

Not unlike most Americans, Bob tended to lump all member of the “yellow race” together.

It was Life’s mission to carefully point out the differences concerned that our anger and contempt not be directed at our good Chinese friends but at the Japanese.

Bob sighed in relief. Finally a helpful guide to identifying the real enemy.

It was a major task, but Life made it so much easier . 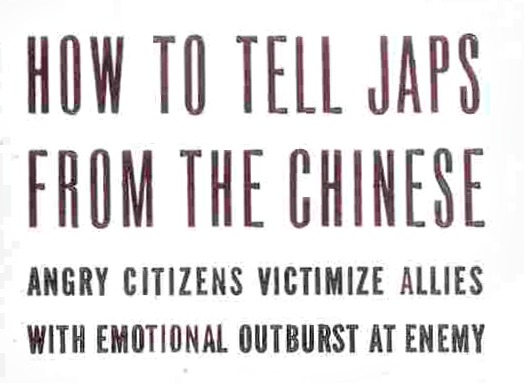 Entitled “How to Tell Japs From the Chinese:” Bob read with interest as  the article explained:

“In the first discharge of emotions touched off by the Japanese assaults on their nation, US citizens have been demonstrating a distressing ignorance of the delicate question of how to tell a Chinese from a Jap. Innocent victims in cities all over the country are many of the 75,000 U.S. Chinese whose homeland is our staunch ally.

So serious were the consequences threatened, that the Chinese consulates last week prepared to tag their nationals with identification buttons.

These photographs are marked with crudely notated facial features such as an anthropologist might compare one animal to another. Life Magazine December 22, 1941

Lest you engage in a friendly conversation with a Japanese American store clerk this handy guide would protect you from this dangerous encounter.

To dispel some of this confusion between Asian friend and foe , LIFE provided a rule-of-thumb for characteristics that distinguished friendly Chinese from the enemy alien Japs.

As in the warplane article, Bob learned how to differentiate between Japanese and Chinese people, with “instructive, easily interpreted diagrams and photographs.

The article’s “helpful captions” explain distinctive bones structures and facial features” with the arbitrariness and stereotypes worthy of an instructor of eugenics .

American racism 100% proof . The second page of the article is framed between two columns of advertisements. Americans consume their racism along with their whiskey.

The Chinese we learn, are smiling and  friendly the Japanese is frowning and angry.

The engaging Chinese man is described as a “public servant,” while the Japanese man ( General Tojo)  is listed as a “Japanese warrior” whose face “shows the humorless intensity of ruthless mystics.”

Across the street, Bobs neighbor Mary was picking up her own mail, anxious to read her issue of Henry Luce’s other publication Time. It too carried its own helpful article “How to Tell Your Friends From the Jap.”

It wasn’t long before distinguishing between a Jap and Chinese would be as easy as identifying a an enemy airplane with their handy-go-to guide. Everything you needed to prevent you for mistaking your friendly Chines store keeper for a Japanese American traitor

Life would help you identify the enemy and properly direct your hatred to the appropriate source.To a frightened hysterical public it came in the nick of  time.

Hatred of the other because of fear is dangerous. Deplorable acts of racism  somehow justified and even honorable in the time of terror and war end up with predictably terrible consequences.

Syrian Refugee Crisis- Is it Deja Vu All Over Again?