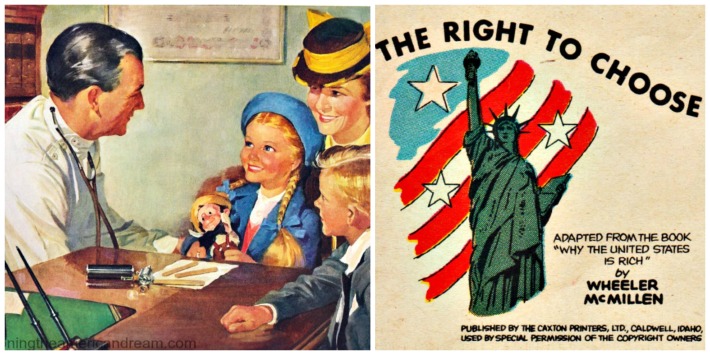 As the halls of Congress morph into a Critical Care Unit, the GOP’s prescription “to preserve our freedom” appears to be to pull the plug on Obamacare- STAT!

Although some Republicans overt hysterics appear to have gone into temporary remission, the bilious rage against the Affordable Care Act escalates.

Festering for 4 years, the scorn Republicans have felt for Obamacare  has blown up into an ugly, raging boil. The repeal fights are bound to be bloody as the GOP are doing their best to dismantle the Affordable Care Act.

Repeal without replacement is just plain bad medicine. Snatching away health care from as many as 30 million people is poor prescription for good health.

A Bitter Pill to Swallow

The health care crisis in America has a long troubling history, the bitter debate about Federally Funded Insurance, persistent.

The seemingly incurable disease first presented itself during the health care debate in the late 1940’s when President Harry Truman, a staunch supporter of  National Health Insurance, argued before Congress that the federal government should play a role in health care.

Cries of “socialism” reverberated in the halls of Congress, and the histrionics we now associate with  Chronic Obstructive Healthcare Syndrome began to appear like a bad rash.

In the chilly climate of the Cold War lawmakers wanted to make sure that the US would not catch a bad case of socialized medicine.

Because America was on red alert, opponents  to Compulsory Health Insurance were able to make socialized medicine a symbolic issue in the growing crusade against Communist influence in America

The revered leader of the Republican party in domestic affairs, Senator Robert Taft was dead set against National Health Insurance.

In his cool, Ohio twang Taft declared gravely, “I consider it socialism. It is to my mind the most socialistic measure this Congress has ever had before it.” Taft suggested that Compulsory Health Insurance, like the Full Unemployment Act, came right out of the Soviet Constitution and promptly walked out of the Congressional hearings.

But no one was more vehemently opposed to National Health Insurance than the American Medical Association.

The idea of compulsory National Health Insurance ran afoul of the AMA one of the most powerful lobbies in the country. The AMA hired public relations firm Whitaker & Baxter to organize it’s opposition, running ads like this one in all the major magazines. The headline in this 1950 ad ask “Who runs America? The Congress? The President? Or You the man next door?” Painting a lurid picture of life under Socialism they concluded that “In the American manner, the people studied the case for socialized medicine and the case against it and they found that the government domination of the peoples medical affairs under Compulsory Health Insurance means a lower standard of medical care, higher taxes, damage to research, penalties for the provider, rewards for the improvident.” 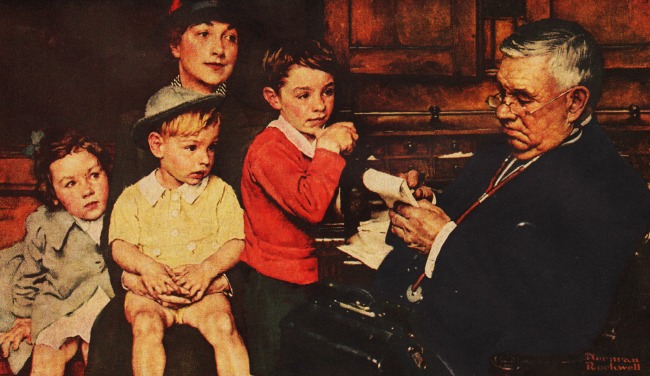 Mid Century doctors were at the pinnacle of authority figures, riding the tide of unquestioning devotion.

So in 1948 when 32-year-old Frank Goodfellow went for his annual checkup,  he took the expert advise of his genial family doctor  Richard “Dick” Lawson very seriously. Nodding in agreement when Dr Lawson advised him to beef up his daily intake of heart-healthy, AMA-approved rich red meat, Frank listened implicitly as the good doctor spoke about health care and freedom in America. 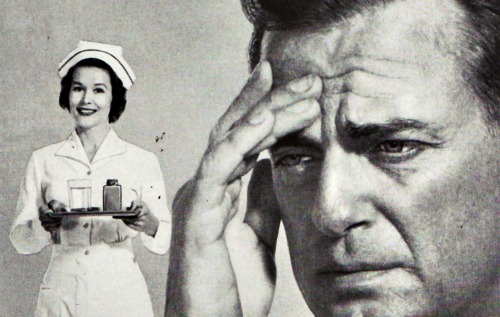 Though Frank was in the pink of health, a gnawing, debilitating tension ate at him.

Like many Americans in the 1948 presidential election year, Frank was confused about the battle brewing in between the 2 parties concerning Presidents Truman’s proposed National Health Insurance.

After more than a decade of New Deal Democrats, in 1946 the Republicans had finally taken control of Congress and had no interest in enacting Compulsory Health Insurance charging it was a socialist scheme. Now that Truman was up for reelection, the President  was pushing hard for the health care bill, his opponents fighting back even harder charging the possibility of its passage would result in dire consequences to the health of the nation.

Perplexed, Mr Goodfellow  turned to his trusted family doctor  for some help.

.After listening to Frank’s account of his concerns, Dr Dick-as he was affectionately known-leaned back in his comfortable cordovan leather chair, put a fresh match to the pipe he was smoking and grew thoughtful. Removing his glasses he came right to the point:

The Voluntary Way is the American Way

Could it Happen Here? Threat of socialized medicine instilled fear of lost freedoms
(L) Vintage Ad Wyeth Drugs 1944 (R) Vintage Cold War propaganda comic “Is This Tomorrow? America Under Communism” a 48 page cautionary tale of how easy it would be for Communists to take over the US. It was published to “make you more alert to the menace of Communism”

Reaching across his big oak desk, Dr. Dick handed  Frank a pamphlet put out by the AMA entitled “A threat to health – a threat to freedom!”

The good doctor put on his reading glasses and read aloud from the brochure:

“Freedom is coming under attack,” he began solemnly. “In much of the world today the people have resigned from running their own countries. Others have been quick to step in- first with the promises of security and then with whips and guns- to run things their way. The evidence is on every front page in the world everyday.”

Frank grimaced in agreement as he took a long drag from his cigarette.

“The reality of war has made every American think hard about the things he’s willing to work and fight for- and freedom leads the list.”

The doctor looked up from his reading, giving former Private First Class Goodfellow time to absorb what he had been saying.

Leaning in close, his face flushed with determination, Dr Dick, somberly explained the grave consequences of such an act as spelled out by the AMA..

Putting the down the brochure, Dr Lawson appeared to brush a tear from his eye.

Like all good standing members of the AMA,Dr. Dick  believed that compulsory health care would limit physician autonomy and income and cause doctors to “become clock watchers and slaves of a system.”

“It is my business to keep you healthy Frank,” he said sadly, the plume of pipe smoke forming a blue haze around him, “but with this alien way of life, of socialism doctors would be mere slaves.”

Is There a doctor in the House? Unable to resuscitate the badly bruised National Health Insurance bill, it died an unremarkable death in the Congressional committee. Vintage Illustration by Phil Dormont Saturday Evening Post 1944

With the same agility and shrewdness he had diagnosed Franks bursitis, Dr Dick went on to dissect the cancer that would be striking at the very heart of American freedom- Compulsory Health Insurance, the first step towards Communism.

“Communism,” he stated firmly, “was invading our shores.”

Communists were like cancer cells Dr Lawson skillfully explained to Frank, “a monster gone berserk. Relentlessly increasing their numbers, cancerous Communists proceed to crowd out healthy societies and begin to steal from the normal countries around them.”

Driving home the point the dedicated doctor continued. “Communists, like germs lived amongst us undetected and could attack and infiltrate anytime. If you were invaded by germs you could end up in an iron lung- if you were infiltrated y Communism you could end up behind the iron curtain. If we had socialized medicine we were one step closer to being enslaved.

Squirming uneasily in his chair, his legs sticking uncomfortably to the seat covered in plastic Fabrilite, Frank Goodfellow shook his head. “It sounds awful,” he said slowly breathing hard. There was more perspiration on his forehead and the color of his glowing pink skin seemed pale and drained of color.

Leaning forward in his chair, Dr Lawson concluded.“Keeping thing as they were was the only cure for a healthy America.”