How Supermarkets Changed Us Pt II 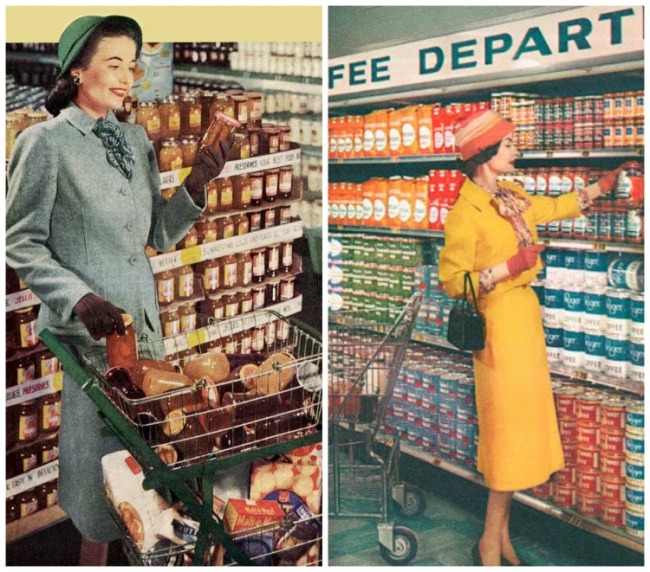 If supermarkets are a showcase for the American way of life, the profusion of colorful packages and containers are the glitzy showgirls winking, shouting, and seducing us to select only them.  Each shopper free to choose from an array of thousands of dazzling options points to our democratic freedom of choice.

Or so we choose to believe. Wink, wink.

Brand names, packaging, and supermarkets form the trifecta of 20th-century food retailing. Codependent, the success of one reliant on the other.  Together they changed not only the way we ate but how we shopped. 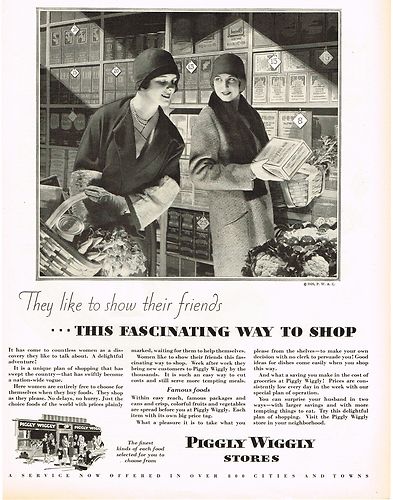 “Rows of bright, trim packages, individual as people; rows of familiar shining tins and gleaming bottles, colorful, cheerful, gay, each with a host of possibilities- what was more attractive than a well-stocked, well-kept grocery shelf,” rhapsodized General Foods in their 1929 cookbook that was an ode to corporate packaged foods.

That bounty was what awaited the up-to-date homemaker of the 1920s when she shopped at any of the thousands of new self-service grocery stores that were sweeping the nation.

Mrs. Modern could pick and choose from the plethora of packaged products on the shelves of her local Piggly Wiggly. Though not quite as large as the soon-to-be-supermarket (that phenomenon was still waiting in the wings) these self-service grocery stores were groundbreaking. 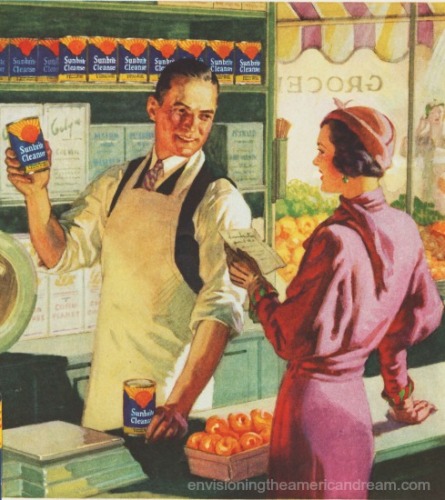 Gone were the days where she had been dependent on the clerk at the grocer to advise and fetch all her items, adhering strictly to her list. Gone where the days of open bins and barrels filled with foods sold in bulk to be doled out by the clerk at his discretion. Grocery stores were now just plain old fashioned.

Why depend on the advice and persuasion of a store clerk when she could now wander the stocked aisles herself and choose what was best for feeding her family.

The forward-looking homemaker filled with all the latest nutritional knowledge didn’t need anyone to tell her what to buy and what to consume.

She didn’t need a salesman.

Out of the Cracker Barrel 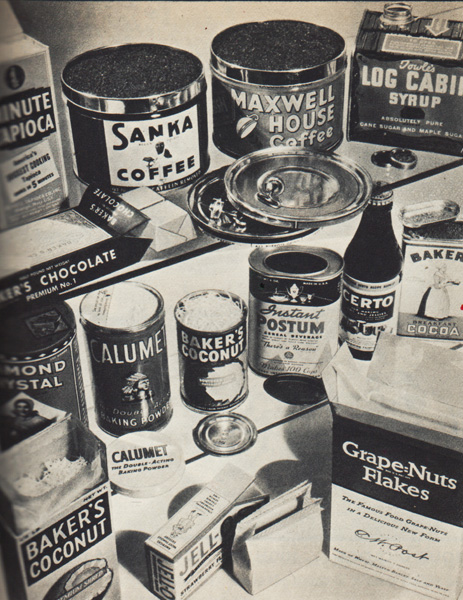 Modern Food Packages- Designed For the Housewife. “An amazing amount of care goes into the designing of modern food packages. Each package must give maximum protection to the product, maximum convenience to the housewife.” General Foods Cook Book 1930

The big game-changer happened in the 1880s when folding cardboard cartons for crackers and cereal could be made by machines.

But it was Uneeda Biscuit that took the crackers out of the barrel. 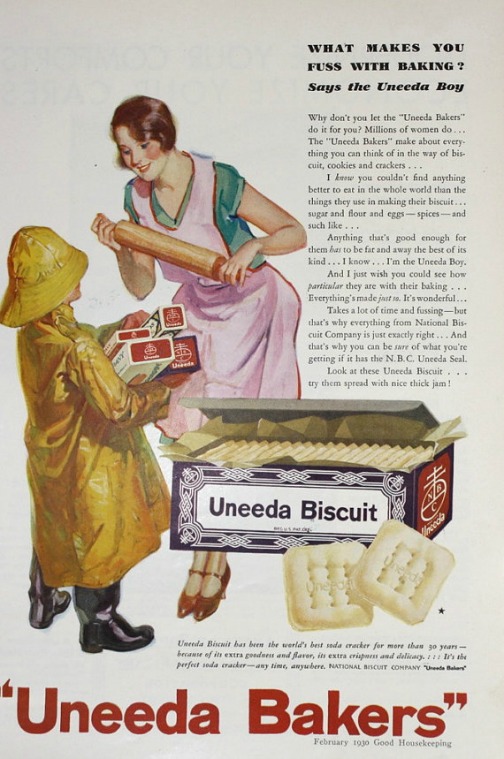 National Biscuit Companie’s patented, moisture-proof In-er-Seal wrap for Uneeda Biscuits launched in 1900 promised that their crackers would not get soggy or stale while waiting to be purchased. The airtight container, a  cardboard box lined in wax paper ensured every customer received the same high-quality product at the same price nationwide.

The packaging not only insured freshness, it enabled manufacturers to turn from selling out of cracker barrels to providing individualized, identical packages.

All stamped with brand names.

With a name worthy of a Don Draper, few missed the meaning of the brand name  U-nee-da, the first multimillion-dollar ad campaign.

Packaging which at the end of the nineteenth century was still only a means to protect a product had now become a thing-in-itself.

Who Can You Trust? 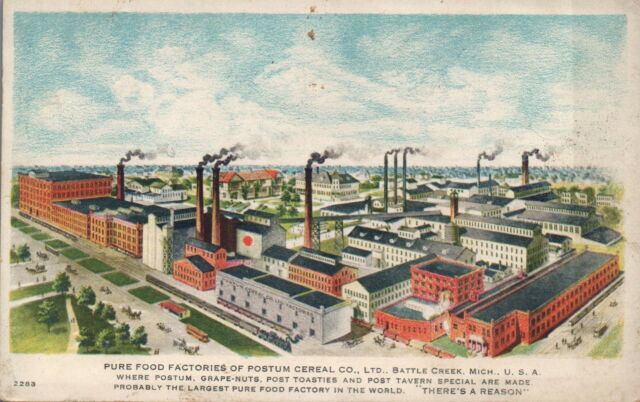 The purity of the factories was emphasized by manufacturers. Vintage Postcard Postum Cereal Company stating they are the largest Pure Food Factory in the world.

Like many of her generation, my great grandmother was suspicious of packaged goods. She was used to purchasing things at the small grocery store where food was sold in bulk or shopping at outdoor markets of pushcarts where she could rely on her senses.

With factory packaged food that she could not smell or even see, the products she was buying were naturally suspect. Why should this unseen food, produced in a giant factory by who knows what kind of workers and recommended by no one, be better than homemade or better than food chosen by a local grocer and small local manufacturers?

She did not trust food disguised in packages. 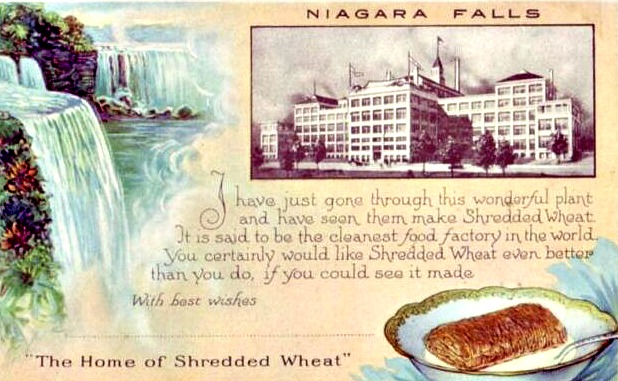 But you could trust that American ingenuity would come to the rescue.

Clever ad men turned the doubter’s argument on its head.

Not only could factory produced foods be more sanitary they said because they were untouched by human hands and then packed in protective packages, but the customer could rest easy that with its brand name on the package, the company would have the incentive to take responsibility for its products and guarantee its own accountability. Corporate Foods took the guesswork out of not only how to use their product but why only their’s was the best.

To Market and Marketing

As food and other household products came to be individually wrapped and more easily transportable it was only a matter of time before someone thought of a new way of selling them.

And so in Memphis 1916  Clarence Saunders hit on the novel proposition that he patented under the name Self Serving Store. He called it Piggly Wiggly. The precursor of the supermarket. 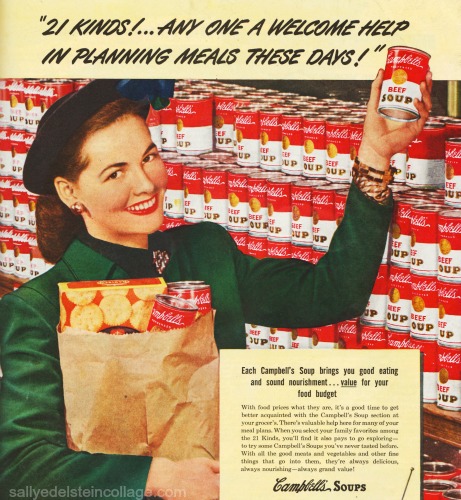 “At last women are free to make their own decisions when they buy food. There is no one to persuade, to urge at Piggly Wiggly- women choose for themselves –help themselves,” a  1929 ad for Piggly Wiggly promised.

Without a grocer, a clerk, or salesman, the products themselves had to do the tempting and the choices could be perplexing.

The salesman was nowhere to be seen. Yet he was very much there.

Each colorful item cried out- their’s was grander, more wholesome, more tempting more easily digestible, with more nutritional value than the other one, preferred by more women and thousands of mothers agree.

Bombarded with nutritional information as never before, the homemaker was also bombarded with choices. Who could she trust?

Suddenly there was anxiety about the right choice. 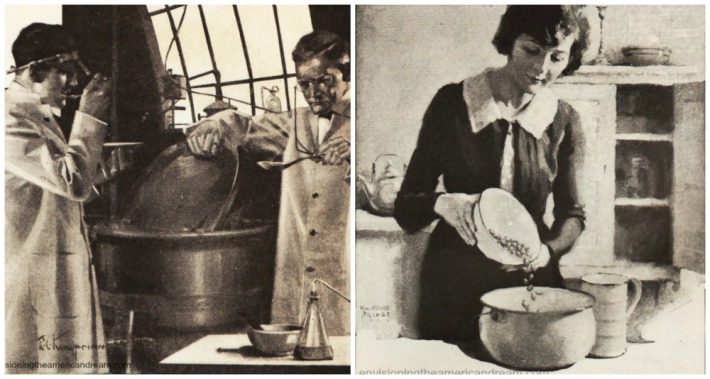 The Housewife was now a scientist n the kitchen

Mothers have always fretted about their family’s diet.

What was different beginning in the 1920s were the new attitudes towards nutrition. Food itself entered a modern scientific age. Along with new ways of shopping were new ways of eating. Women absorbed the most up to date information showing her new ways to think about diet and digestion. Exciting scientific advances and discoveries about food seemed to unfold every few weeks.

Although it was a German scientist who had come up with the new idea of classifying foods into proteins,  carbohydrates, and fats, it was American industry that was putting it to good use in the hawking of their products.

Scientists  had recently discovered vitamins, and the corporate food manufacturers jumped on the bandwagon touting their product as “protective foods.” Words like fresh, pure, and wholesome were factory food favorites. Every new product claimed scientific backing for their nutritional theories. These messages were conveyed in advertising and on the packages themselves. 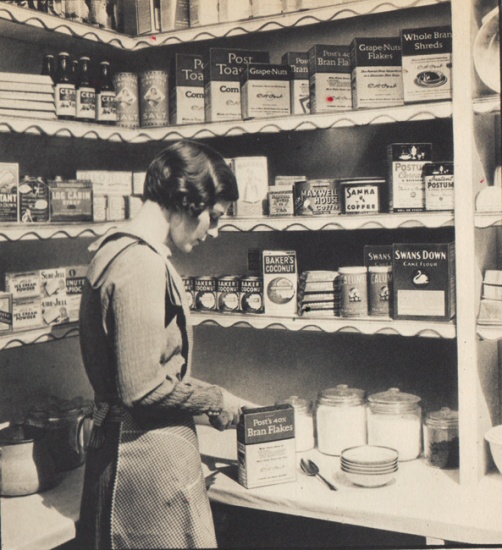 General Food’s family of fine foods wanted Mrs. Homemaker to be part of their family

Even armed with the latest scientific advice on sound nutrition, the housewife needed assurance she was choosing the right product for her family.

Articles in womens magazines warned: None but the most dependable products – the ones worth knowing- should have a place on your pantry shelves; for here stands that select company you depend upon for everyday needs and emergencies day in day out.

Forward-looking food manufactures, as well as food editors, urge housewives to know the products they buy- know what they are made of and how the important component of food were discerned only in a scientific lab  by a trained expert eye. 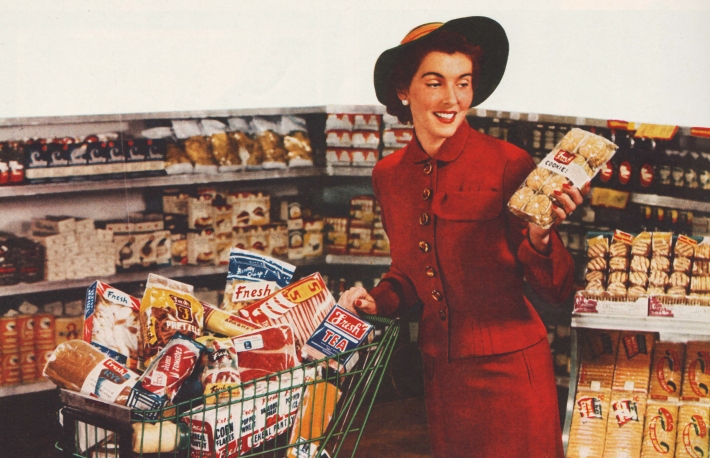 The overwhelming new power of packaging then came from self-service.

Now that the modern homemaker had to rely on her own judgment for choosing products it was up to the food manufacturers and the ad agencies to assure her of their quality. And the wisdom of her judgment in selecting the right one. Theirs.

You don’t have to trust guesswork anymore, the homemaker was re-assured.  And you don’t have to take just anyone’s say so. The sanitary testing kitchens of food manufacturers were all working overtime to put their knowledge at m’ lady’s disposal. Who could provide more authoritative judgment about a food product than the esteemed directors of the Home economics  department in the many corporate manufacturers of fine food?

For the family’s health and well being, only their product, they claimed, had the exact nutritional elements that offered purity, wholesomeness, and dependability that could be used as vital food by the millions of cells in the body.

Take a Name Brand and Take it Easy 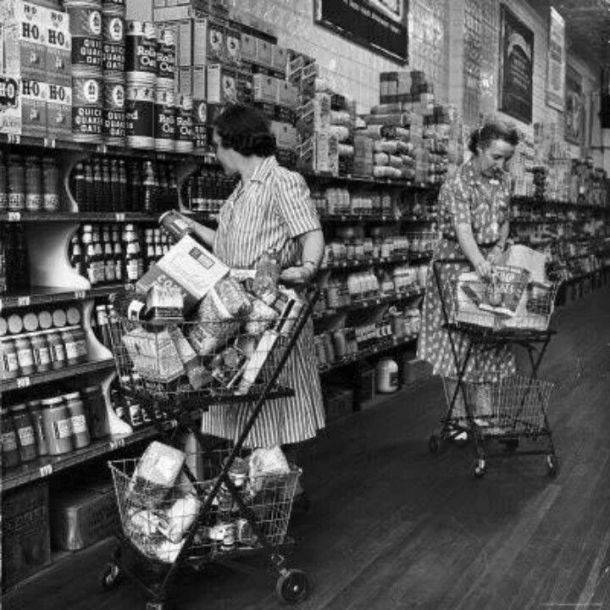 Everyone was vying for the attention of Mrs. Homemaker to entice her to make their product a regular pantry occupant.

“Guesswork has given way to knowledge about food selection, about what to eat.”

And the early Mad Men of Madison Ave would be happy to impart that knowledge.

Every package in the food market was now in competition with every other. Now the package- as well as, or instead of, the product- was what was advertised.

Take a name brand and take it easy!

Next : The First Supermarket. And to better display this abundance supermarkets were waiting in the wing.