The 1960s were to have served as a wake-up call to many Americans concerning police and race.

Somehow, we fell back to sleep.

We are now living in the future we looked forward to in the late 1960s,  a time when racial tensions blew up into riots expressing long-simmering injustices. A time of deep division between the people and those who had taken an oath to protect and serve them.

A time when we thought we had finally addressed America’s race and police problem. 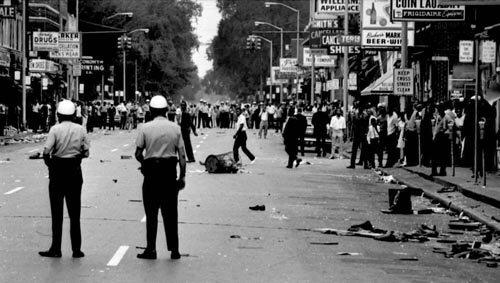 Detroit in flames. Summers were punctuated by smoke and fire as Blacks revolted across the nation with the blazing riots that spread from Detroit to Newark to Washington DC.

With increased hostility to the police from alienated minorities and the poor, police departments in the late 1960s had to improve relations between them and the communities they served.

In 1968 President Lyndon Johnson formed the Kerner Commission to explain the riots that had erupted in our cities each summer since 1964.

The Kerner Report concluded that the nation was “moving towards two societies, one black one white-separate and unequal.”

Unless conditions were remedied the commission warned, the country faced a “system of apartheid” in its major cities. It delivered an indictment of white society for isolating and neglecting African Americans and urged legislation to promote racial integration and to improve slums.

The findings of the Kerner Commission Report were meant to strengthen the relationship between minorities and police and made recommendations to improve the situation for the future.

How did that work out? This past weekend protests in major American cities prove not too well.

The one constant that has not changed is the deeply embedded institutional and individual racism that pervades our country.

How do we move forward when we’re stuck in reverse? 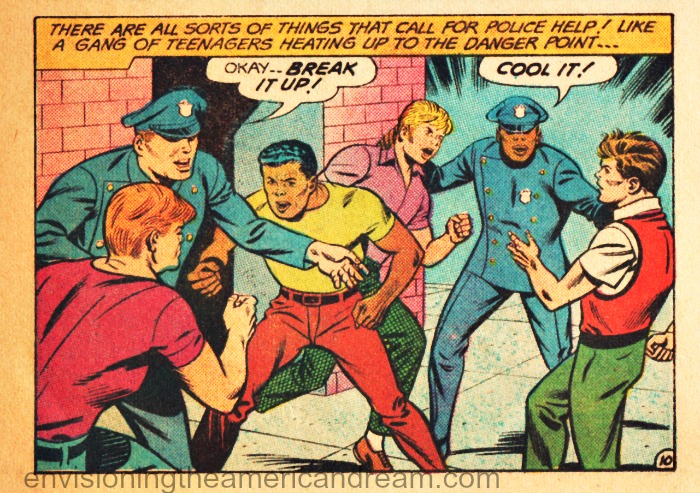 When it came to injustice we were supposed to Cool It.

Like a vintage re-run on Antennae TV  we’ve viewed too many times, the story playing out before us today is painfully familiar.

Along with Minneapolis, Los Angeles, and Philadelphia,  New York City is torn by racial strife and angry protests, a public gripped by fear, anger, and frayed nerves as the gulf between cops and African-Americans grow wider and a mayor who is the subject of police animosity.

Back then when cops were “pigs,” cities burned, protesters demanded a change in policing as we knew it, while a bitter debate about how American police forces treated non-white citizens was escalating.

During that tumultuous time, the NYPD faced unprecedented tension and political battles.

They had a major public relations crisis.

Your Friend The Policeman

As the current NYPD relationship with their community frays, they might want to take a page from this promotional comic book published in 1968 in an attempt to build community relations and improve their image.

Reacting to the public outcry that too many minorities were not being treated by cops in a fair way and hoping to repair their tarnished image, the NYPD began a publicity campaign to  strengthen the relationship between minorities and police which included publishing a sugar-coated promotional comic book called “Your Friend the Policeman.”

Since kids have long looked to comic book superheroes for a sense of justice and order, why not paint the troubled NYPD with the patina of a superhero,  champions of the oppressed with an unwavering commitment to truth justice and the American Way!

Distrust could be replaced by respect and awe as we came to believe in these men in blue as they battle evil, fight thugs, save lives, and protect the modern metropolis of N.Y.C.

Following the adventures of 3 racially and ethnically mixed N.Y.C. kids, the comic book illustrates how much the police help the residents of N.Y.C., demonstrating all the ways in which the benevolent police department goes all out to make N.Y. a better, safer city for everyone. 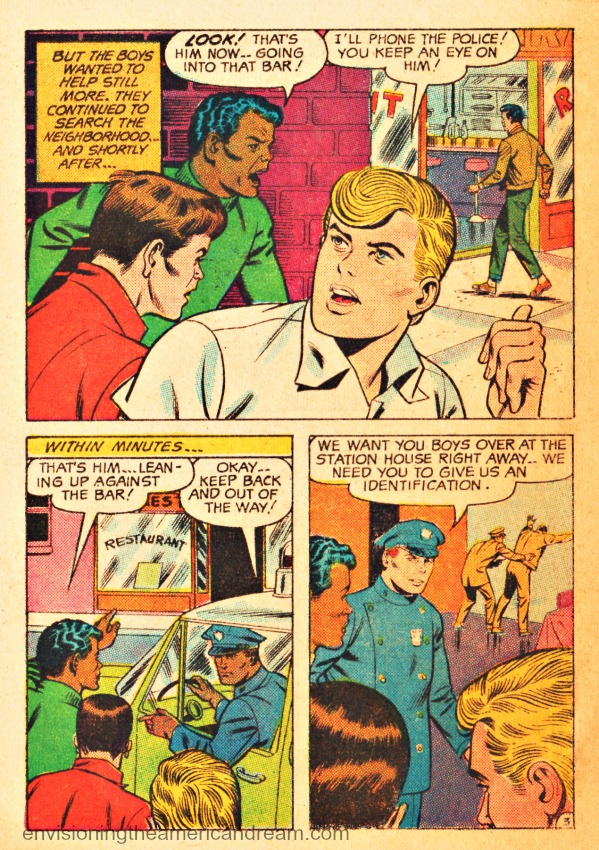 “Your Friend the Policeman” was distributed by NYPD to introduce the policeman to kids and recruit teenagers in 1968 .

The Kerner Report released that year confirmed that too many minorities were not being treated by cops in a fair way and called for more racial diversity especially in the police forces. The comic book is notable for the inclusion of African Americans as police officers.

Twenty years earlier in the 1940’s N.Y.C. black communities repeatedly complained about the lack of blacks in the police department. Furthermore, a housing department survey found that police bias was the single biggest obstacle to a healthy relationship between blacks and city authorities.

A report suggested that the police assigned to Harlem were often men from outside the community who took no real interest in the residents. So strained were relations between the community and police that  Harlemites likened the NYPD  to a “racist army of occupation.”

Naturally  “Your Friend the Policeman”   adheres strictly to the comic book code enacted by the Comics Code Authority in 1954:

“In every instance good shall triumph over evil and the criminal punished for his misdeeds. Crime shall never be presented in such a way as to promote  distrust in the forces of law and justice. “ 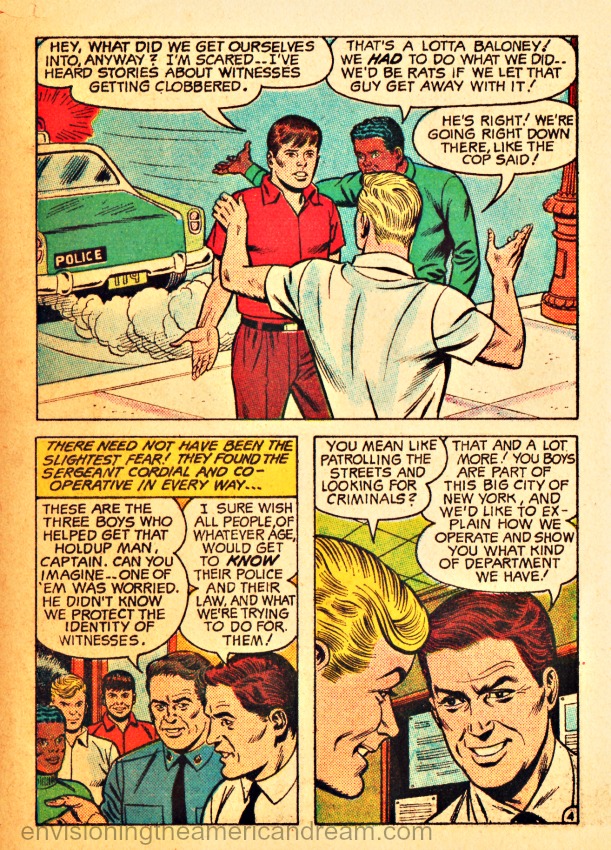 The Kerner Report challenged the longstanding impediments to blacks and Latinos in police work and confirmed what many already knew “For Negroes, police have come to symbolize white power and white oppression.” Mayor Lindsay was selected by LBJ to be Vice Chairman of the Kerner Commission and he had a profound impact on its policy recommendations.

As Champions of the oppressed, it was important to show that the NYPD was reaching out and recruiting minorities, proving the policeman really is your friend. 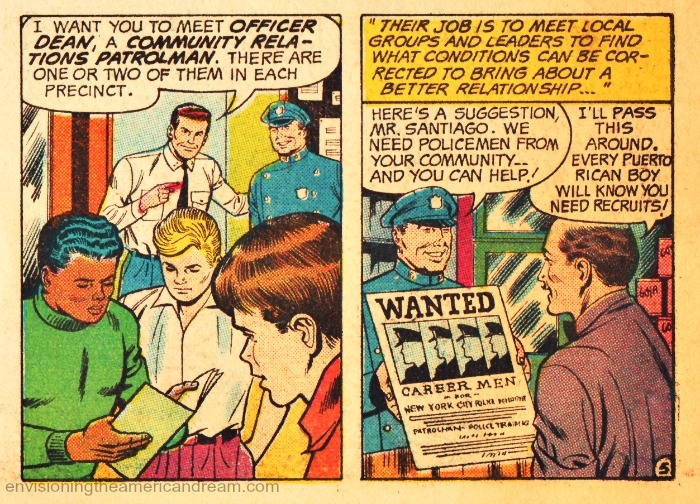 A good friend, the policeman was there to listen to you.

Like superheroes, the NYPD  serve the powerless and fight to maintain order in his city.

Mayor John  Lindsay strongly believed police cannot be policed by those they work with everyday and introduced bold initiatives in police practice such as the appointment of a Civilian Complaint Review Board.

In order to instill public confidence that investigations of civilian complaints were handled fairly, it made sense that the board itself should have civilian representation.

The first steps in creating the Civilian Complaint Review Board had been taken in 1950 when a coalition of 18 organizations lobbied the city to deal with police misconduct in general and “police misconduct in their relations with Puerto Ricans and Negroes specifically.”

In response to their demands, the NYPD established the “Civilian Complaints Review Board” in 1953 as a committee of 3 deputy police commissioners to investigate civilian complaints. No civilians sat on the board.

In 1966 with complaints of increasing police brutality against minorities increased, Lindsay proposed a civilian review board.

Like Mayor Bill De Blasio, who has come under a barrage of criticism with police officials blasting him for what they believe is an “anti-police state” Mayor John  Lindsay came under blistering attack by the police unions, demanding to “Dump Lindsay.”

John Cassese the president of the Police Benevolence Association at the time, was anything but benevolent to Lindsay and  vehemently opposed a civilian on the board famously saying “I’m sick and tired of giving in to minority groups with their whims and their gripes and shouting.”

Despite that, the mayor appointed 4 candidates and for the first time in the city’s history, people outside the department oversaw the investigation of complaints against public officers.

The Police staged protests, firmly opposing the possibility of outside scrutiny into the way officers conduct business. Resorting to fear-mongering, the police unions conducted a huge public relations campaign that eventually defeated the review board in a referendum that year.

With the board voted down, it returned to its previous all police make up.

It would take until 1987 for the city council to create a board with one private citizen. In 1993 after extensive debate and public comment, Mayor David Dinkins created the Civilian Complaint Review Board in its current all civilian form.

Despite profound changes in the dept over the past 2 decades including legal victories on behalf of blacks and Latino officers and a series of publicity campaigns to recruit racial minorities the NYPD continues to be divided by politics of race and class. 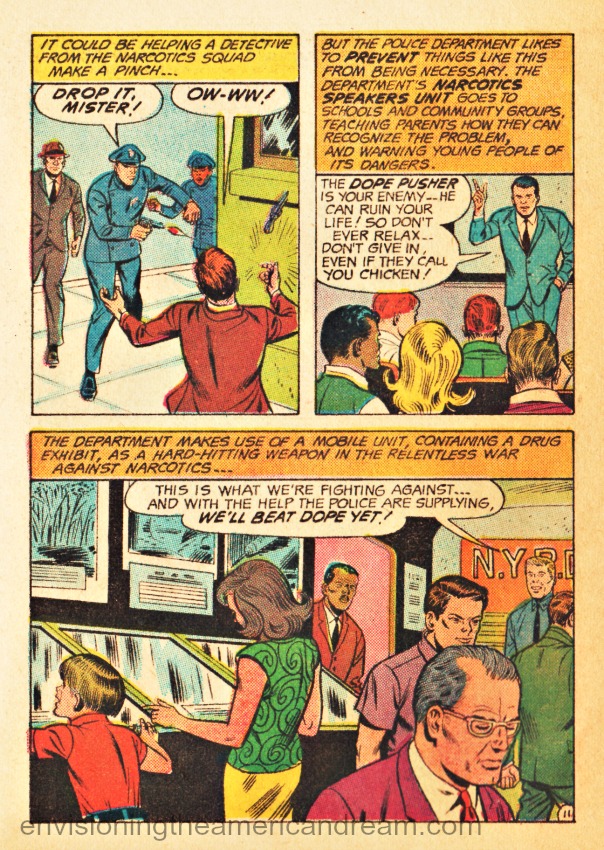 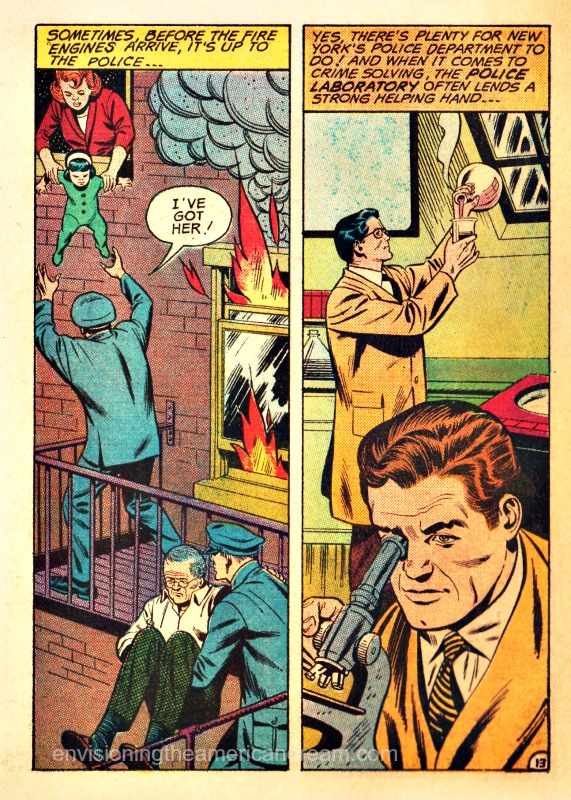 So we learn that just like Superman the New York City Police officer is a powerful force for good vowing to spend his day fighting crime and injustice and helping those in need.

But what has happened to the commitment to truth, justice, and the American Way?

(Top clockwise) An unarmed Sean Bell was shot 50 times by police, 1999 slaying of unarmed Amadou Diallo in a hail of 41 bullets in the Bronx, 1997 Police officers brutalized Abner Louima on the bathroom of a Brooklyn Station House, 2014 Police chokehold leads to the death of Eric Garner.

A Primer on Police and White Privilege