In the puritanical Post-War years before there was Playboy Magazine, red-blooded ex-GI’s could still get an eyeful of racy pin-up girls just by glancing through their favorite magazine.

No, I’m not talking about Wink, Flirt, Eyeful, or any of the dozens of girlie pulp magazines hidden in the high, rear shelves of the local drug store, but right there in the mid-century family’s  Norman Rockwell covered Saturday Evening Post.  All-business, no-nonsense Fortune Magazine offered an eyeful too!

These and several other mass-market magazines all ran a legendary series of advertisements put out by Springmaid Fabrics filled with enough risqué wording and sexy pin-up girls to rival those of illustrators Earl Moran and Pete Driben’s girlie covers on Twitter.

These ads generated both public adoration and puritanical outrage. It wasn’t so much the illustrations that caused a ruckus but the often salacious double entendre copy written by the owner of Spring Mills himself, Elliot White Springs.

The ads proudly boasted that the fabric company was now in the “hip harness and bosom bolster business.” Cheekily, they referred to ladies’ underpants as “ham hampers” and their brassieres as “lung lifters.” A post-war public already beset with Atomic jitters was now gravely warned against contracting such dreaded conditions as “rumba aroma,” “skaters steam,” and “ballerina bouquet” which only Springmaid miracle fabrics would prevent. 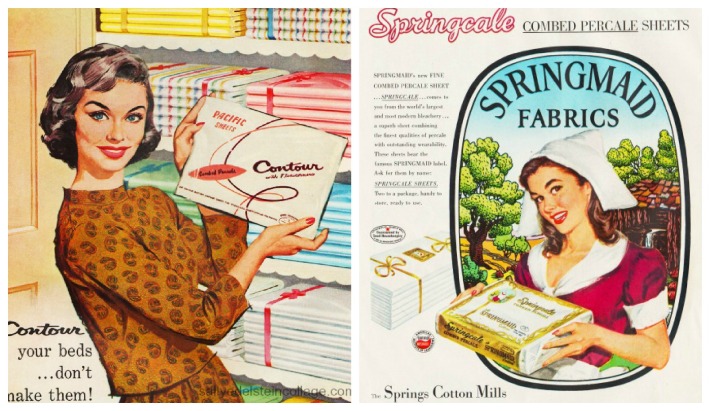 And yes, if you were wondering, this is the same Springmaid whose 300 count sheets you recently purchased for your guest bedroom at Bed, Bath and Beyond. 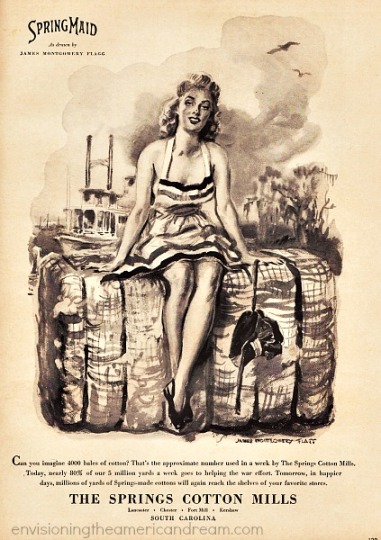 Before they embarked on this racy campaign, Spring Cotton Mills was enlisted in another campaign, recruited by Uncle Sam as a major supplier of cloth to the armed services during WWII.

One part of their important war work was developing a special fabric for camouflage. it was to be used in the Pacific to conceal ammunition dumps and gun emplacements,  but the Japanese learned to detect it because of its lack of jungle smells.

Spring Mills came up with a novel solution.

When the fabric was dyed it was also impregnated with a permanent odor of hibiscus, hydrangea, and old rubber boots. The deception was so successful that when Tokyo fell, the victorious invaders hung a piece of this fabric on a Japanese flagpole.

Triumphant from their many success during the war, Spring Mills patented that process along with several other innovations and marketed them for use in women’s foundation garments.

Under the watchful eye of Elliot White Springs, the once-staid company took a more risqué direction.

The idea for the pin-ups got their start in 1947 with an in-house beauty contest- Miss Springmaid. The winners were taken to New York where they were drawn by leading illustrators that would eventually be used in advertising.

The new post-war ads all began explaining the company’s many war triumphs and touting the peacetime use of its war-time fabrics: “….the fabric is now available to the hip harness and bosom bolster business as Springmaid Perker. The white with gardenia, the pink with Camellia, the blush with jasmine, and the nude, dusty. ”

It concluded, “If you want to achieve the careless look and avoid ‘skaters steam’ kill two birds with one stone by getting a camouflaged callipygian camisole.

Another ad from 1949  featured “luminous fabric named ‘shiner’ for ‘rearguard business’. You don’t have to feed your baby onions,” the ad informed the reader, “to find her in the dark even at a masked ball.” 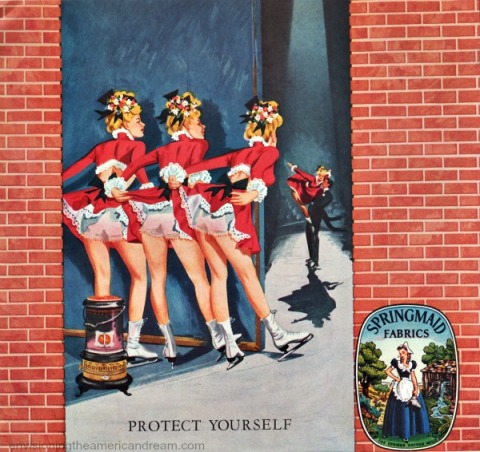 Recalling a cover illustration of Esquire Magazine featuring 3 skaters warming themselves up before a performance, Springmaid acquired the rights to the illustration to use in one of their own ads for a fire-proof fabric that they had developed during the war.

This flame-resistant fabric originally developed for airplane ground crews and carrier fire squads was now known as Springmaid Kerpyr and was “available to the false bottom business as combed broadcloth. If you expected to attend a campfire picnic, a fourth of July barbecue, or warm yourself in front of a crackling fire, be protected by the Springmaid label on the bottom of your trademark.”

Another of their war-time products was a special cotton fabric coated with emulsified rubber, cut into strips, put into rolls, and shipped to hospitals all over the world for use as adhesive tape.

The cloth known to the trade as Sticker became available to the false bottom and filibuster business.

“Don’t depend on buttons and bows, warned the copy in this 1949 ad, “but switch to Sticker and let Springmaid label protect you from the consequences of embarrassing accidents such as pictured in the ad. We stick behind our fabric and feel its tenacity so strong our only competition comes from a tattoo artist.”

During the war, “The Springgs Cotton Mills” was called upon to develop a crease proof cotton fabric. It was used wityh great success as a backing for maps, photographs and other valuable assettes. This fabric has now been further protected and made avaialble to the torso twister  trade.

After a convention, a clambake or a day at the Pentagon Building, you need not eat off the mantel if you have your foundation covered in Spring made Poker woven yarn.

As the ads heated up along with the hot-headed public’s reaction to them, Time Magazine reported on the tumult in the summer of 1948:

“Such lusty ballyhoo-for Spring Mills Springmaid fabrics- startled readers of the high-necked New York Times. It also drew a shocked cry of ‘bad taste’ from Advertising Age and protests from the New Yorker, Life and other magazines which refused to run other Springmaid copy until such phrases as ham hamper, lung lifter, and rumba aroma were deleted.”

“Not in months had advertising titups caused such a tizzy.”

Elliot Springs, at times characterized as emotionally unstable, clearly missed his calling in life as a showman or an adman on Madison Avenue. In a shameless bit of self-promotion, a self-published book he wrote was boldly hawked in each and every Springmaid ad:

“Elliot White Springs, president of The Springs Cotton Mills, has written another book,’ Clothes Make the Man’ which was indignantly rejected by every editor and publisher who read it. So he had it printed privately and sent to his friends for Christmas. After they read it, he ran out of friends, so there are some extra copies. It contains a veritable treasury of useless information, such as how to build cotton mills, how to give first aid on Park Avenue, and how to write advertisements. If not available at your local bookstore, send a dollar and postage to us.”

Who Puts the Broad in Broadcloth

In addition, for those who loved the Springmaid campaign, one could order a set of the ads suitable for framing for just 25 cents. How about a new calendar featuring 15 titillating Springmaid ads sold at newsstands everywhere. For a mere quarter, you also could be the owner of a sheet of decals of 6 sprightly Springmaid girls.

If that weren’t enough, Springs had designed a sports shirt with 16 Springmaid girls printed in 6 colors on Springmaid broadcloth. For $3 they would gladly mail you one.

And underneath it all, what man wouldn’t lust after a pair of boxer shorts sprinkled with Springmaid beauties in dazzling color and provocative poses! 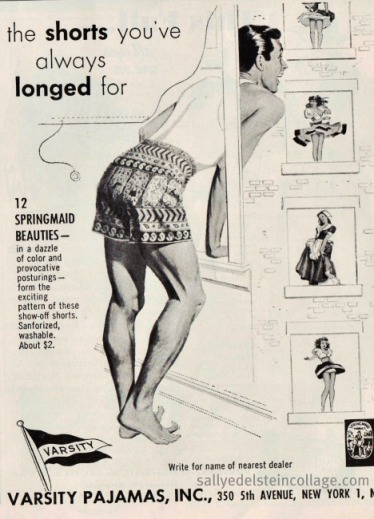 He may not have made much money from “Clothes Make the Man”, but in the great American tradition, the controversial ads paid off handsomely with record sales for Spring Mills.