Break out your Wayfarers…today is National Sunglasses Day!

Accustomed to sporting cool shades I have of late been seen skulking about in those oversize, black, wraparound sunglasses so very chic amongst the senior set in Bocca Raton.

Though hardly ready for a retirement home, I have been required to wear these temporarily because of recent eye surgery.

Sunglasses worn solely to protect my vision…what a concept

I Wear My Sunglasses at Night

Sunglasses status as fashion accessories has become as great a consideration as the degree of protection they offer from the sun. Vintage Ray Ban ad 1960 “Try on a pair…you won’t settle for less”

Once upon a time, people wore sunglasses only when they were under the sun. Now they wear them from sun up to sun up. From New Years Day til New Years Eve.

In every kind of weather.

So how did sunglasses evolve from frankly functional to fashions ultimate accessory?

Eye Care For the Sun

Before designers flaunted their logos on their overpriced frames, the only designer names attached to sunglasses were optical firms like Bauch & Lomb, American Optical and Willsonlite.

By the late 1930s advertisements for sunglasses began appearing emphasizing scientific protection from the damages of the sun…fashion was an afterthought.

In 1936 while army air corp pilots first began wearing polarized sunglasses developed by Bauch & Lomb to protect their eyes from the dangerous glare of the sun, earth-bound beach bunny’s were soon encouraged to protect their own precious peepers from harmful rays, with their own version of the Ray Ban aviator sunglasses.

“Don’t blame the hot dogs for the dizziness and nausea you feel after a day in the sun,” Optik sunglasses cautioned the beach goer in this 1941 ad. “Ten to one its due to unsuspected distortion in your sunglasses!”

A “Beach headache” they explained was a red flag that you were getting too much sun and its harmful ultra violet rays which could lead to permanent eye damage.

Capt.Only Superior products such as Optiks sunglasses with their scientifically ground and polished lenses, would protect you from distortion danger,

Besides which, isn’t you eyesight worth 50 cents?

So while you were slathering on the baby oil to get a healthy sun tan, be sure to don a pair of good sun glasses for protection.

Advertising continued to be geared to sportsmen Whether shushing on the slopes or splashing in the surf, hunting down deer or driving a ball down the Fairway, sun glasses were for the active American lifestyle and fashion was still a second thought.

By the postwar years, sun glasses were becoming so popular that they merited their own week June 26-July 2- “Wear Sun Glasses for Comfort and Safety.”

In one of their ads we are warned of the dangers of not wearing sun glasses to sporting events. “Who has made the smarter choice,” we are asked. Smart Sue or Dumb Don?

“Over exposure to sun will reduce the fellows eye sensitivity to light about one-third compared to Smart Sue who wore sun glasses to the baseball game. Dumb Don’s ability to see will be curtailed for hours, possibly days- real danger lurks when he drives after dark or works in his factory.”
Not wearing sunglasses can cost him his job! Every person is affected this way. Sun glasses protect your eyes.”

As sun glasses increasingly became associated with Hollywood glamor and the wealthy vacationers in St Moritz, celebrities now not only wore sun glasses but began lending their name to the products.

Polarized lenses technology had been created in the 1930s by Edwin H Land founder of Polaroid Corp. and American Optical used it in their Sportglas. 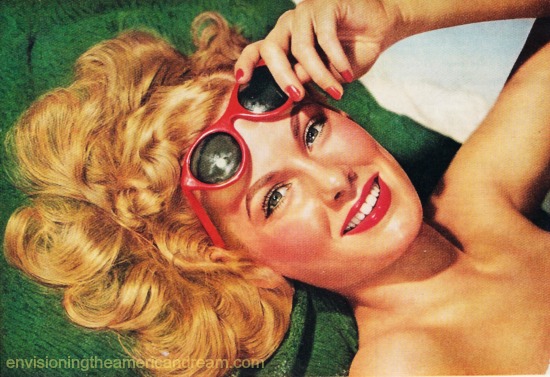 As the melding of sunglasses and glamor grew so did the market for flattering glasses. 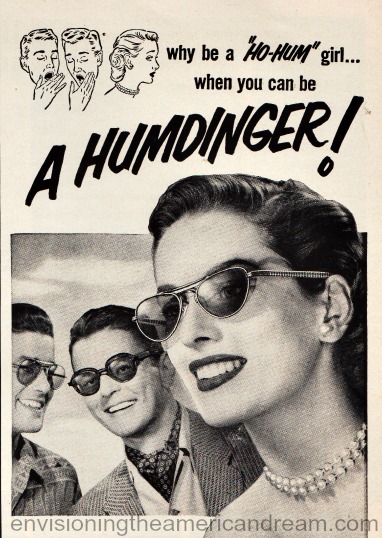 “Why be a ho-hum girl…when you can be a humdinger!”
“This summer glamor eyes your face with Flexfit sun glasses! Wonderful styles to turn admiring eyes your way!” 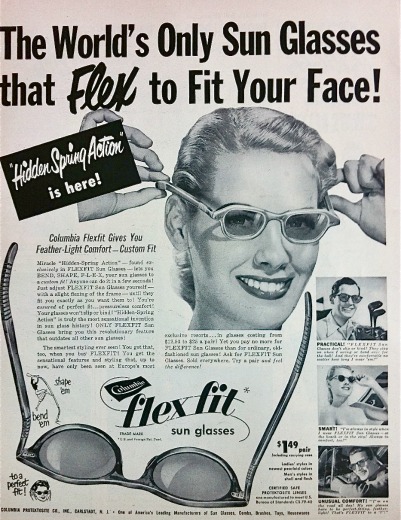 Flexfits “Hidden Spring Action” is truly the most sensational invention in sun glass history! Only Flexfit Sun Glasses bring you this revolutionary feature that outdates all other sun glasses!”

Fashion for the masses, was Flexfit’s promise with their flexible sunglasses that they boasted were the most sensational invention in sun glass history!

Flexfit sun glasses promised the smartest styling ever seen with features and styling that, they claimed, up till now have only been seen at Europes most exclusive resorts….in glasses costing from $12.50 to $25 ! Yet you pay no more for Flexfit sun glasses than for ordinary, old-fashioned sun glasses- a very democratic $1.49.

In addition Flexfit offered their miracle “Hidden Spring Action” – “found only in their sun glasses – lets you bend, shape and flex your sun glasses to a custom fit.” 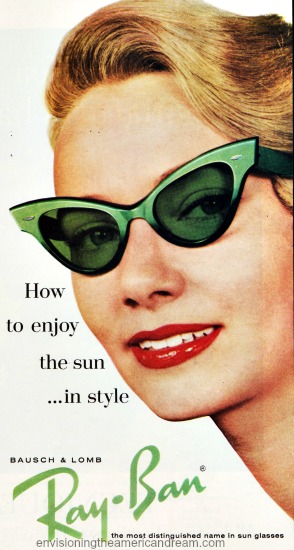 Frame Your Eyes in Flattery with Ray Ban Sunglasses ! 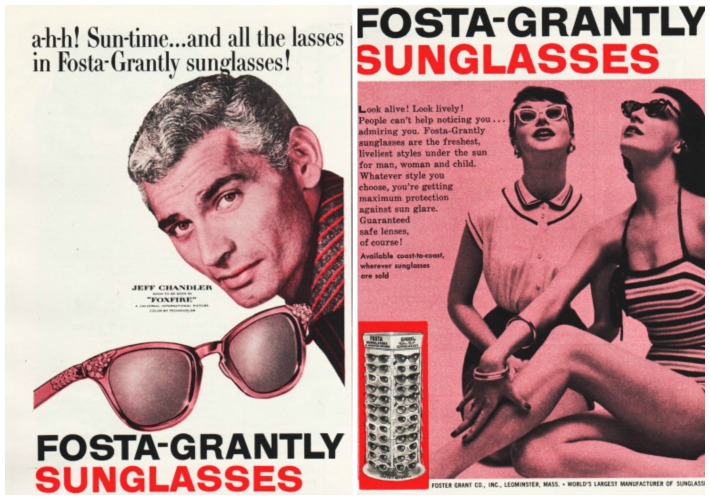 No one did more to emphasizing the sex appeal of sunglasses than Foster Grant.
“Look alive! Look lively! People can’t help noticing you…admiring.” begins this 1955 ad . “Fosta Grantly sunglasses are the freshest liveliest styles under the sun for man woman and child.”

The death knell for utilitarian sunglasses was finally dealt a blow with the sexy ad campaign by Foster Grant that helped escalate the popularity of sunglasses.

The Spell of the Shades 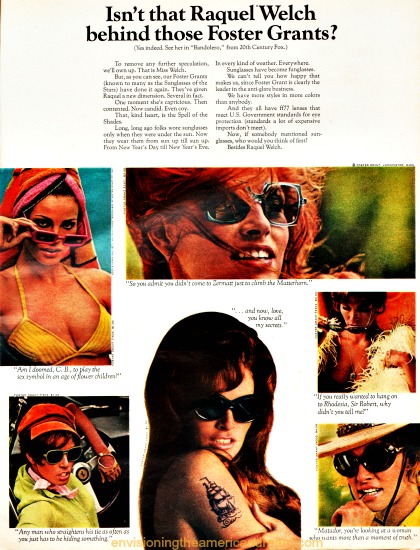 In the 1960s attempting to compete against the technological edge of Cool Ray Polaroid polarizing lenses, Foster Grant developed the clever marketing “Who’s That Behind the Foster Grants” ad campaign, that went on to huge success becoming part of popular culture.

The folks at Foster Grant were besides themselves with the new rage for sunglasses. “Since we are the undisputed king of the hill in sunglasses, this international boom really hits us where we live,” they boasted in one of their ads.

And bragging rights were justified.

They were the grandaddy of sunglasses. In 1929 Sam Foster of Foster Grant Co sold the first pair of Foster Grants sunglasses on the boardwalk of Atlantic City. They were also the first company to use abrasion resistant lens coatings to block the suns ultra violet rays.

America was under the Spell of the Shades, observed Foster Grant.

“If you don’t believe it, gentle reader, look around. We are in the midst of an intercontinental sunglass explosion and it has nothing to do with the glare of the sun.”

Of course Foster Grant sunglasses did offer eye protection with their ff77 lenses, but that was a mere afterthought to most folks.

As they explained in their ad: “People don’t buy them for their lensmanship. Anita Ekberg, for instance, doesn’t know ff77 from first base. But when we left, she ordered 15 pairs.”

The provocative headline asking the reader: “Isn’t that Elke Sommer behind those Foster Grants?” lent an cool air of mystery to the shades.

“The suspense is killing, so we’ll fess up. It is Miss Sommer,” they reassure the reader.

“But you’ve got to admit that, despite her singular talents, there is a split second when you wondered. And that’s the power of sunglasses. Our 1966 Foster Grants have wondrously worked their magic upon her. Elke changes.”

“That dear friend, is the Spell of the Shades!”

“The day of strictly utilitarian protection from the dastardly glare of the sun is gone. Now sirens like Sommers are sporting a different pair with every vapor every ensemble ever time of day. Winter and summer.”

The rest is history….

Sizzling in the Sixties Suburban Sun