Cold, Flu and the Story Of Kleenex 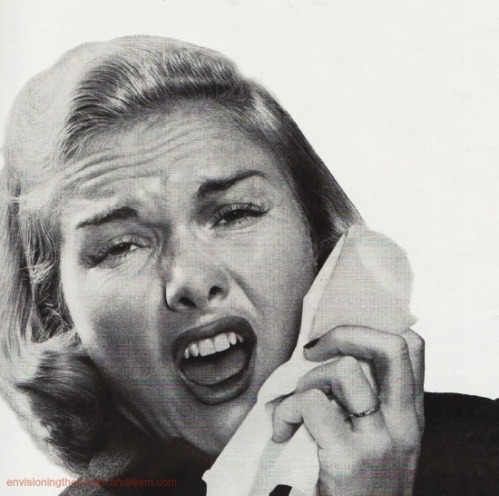 It’s the height of cold and flu season again which means it’s all out war on sniffles and red running noses.

For those battle fatigued sufferers, endless reinforcements of Kleenex are constantly being supplied to the front lines.

Today we take for granted those ubiquitous boxes of soothing tissues, but for an earlier generation who battled the 1918 flu epidemic, the existence of Kleenex would have been nothing short of a miracle.

Kleenex wouldn’t make its debut until the mid 1920’s and a grateful nation suffering from hay fever and winter colds sat up and took note.

No one was more grateful than my grandmother Sadie.

Tucked into her sleeve, or balled up in her pocket, Nana Sadie never went anywhere without a tissue at the ready, her first line of defense against deadly germs. Nana was certain the air was filled with dust and germs which could then be inhaled resulting in a nasty cold…or worse.

To her, the invention of Kleenex was a modern marvel of science, rivaling sulpha drugs and penicillin in saving mankind. With the simple toss of a disposable Kleenex into a waste basket, you were wiping out thousands of dangerous germs, and saving countless lives.

As a veteran of the first and worst flu epidemic every, old fears and suspicion borne of that war, had scarred Nana Sadie for life.

In 1918 America was at war, not only over there but here at home  as  well. The Influenza epidemic of 1918 meant it was all out war on the home front too.

It was a panicky time, when everyone and everything became suspect as the cause of contamination mirroring the Red Scare which reached near hysteria that year.

Provoked by a fear that a Bolshevik revolution in America was imminent – a revolution that would destroy the American Way of Life, ordinary people became suspect of being Anarchists and Communists.

So it was with the Influenza, when even everyday items such as books, candy wrappers came under scrutiny and attack as transmitters of the dreaded disease.

Everything came under suspicion – paper money, ice cream, even wet laundry. No one was safe from that villainous brute Influenza.

“Everyday someone else you knew got sick,” my grandmother would explain sadly.

“It killed the young, the strong, the healthy, the rich, the poor, people who had so much to live for…my own brother and sister, so young, God- rest -their -souls. People avoided one another, they didn’t speak, if they did they turned their faces away to avoid the other persons breathing…”

Dangerous germs, scowling and sneering could be lurking right around the corner- yesterday a suspiciously shared sarsaparilla in a soda fountain, today, a sneeze on a shared seat in a sullied streetcar, tomorrow-who knows- the blunder of a borrowed book from the public library.

But the favorite source of blame continued to be handkerchiefs. 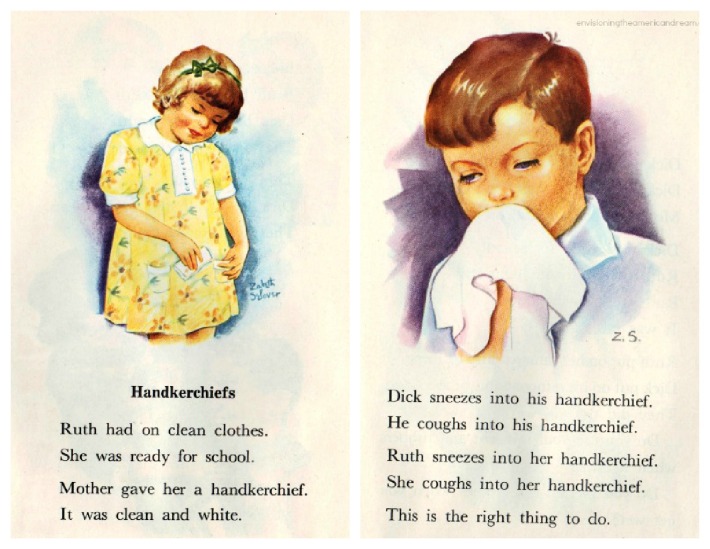 Those lovely embroidered, heirloom hankies that every proper lady, gentleman and well brought up child always carried- might well be aiding and abetting unseen armies of influenza germs, rendering your dainty, lace trimmed hanky as dangerous as any incendiary device.

Carelessness on your part, and suddenly your monogrammed handkerchief, harboring germs, could be turned into a weapon of bio-terrorism, threatening you and your terror-stricken neighbors with the dread menace of infection.

The conventional wisdom at the time was that the menacing influenza virus when scattered by an infected sneeze, or a soiled hanky, could continue to live in household dust and infect the whole family with the flu even six weeks later. 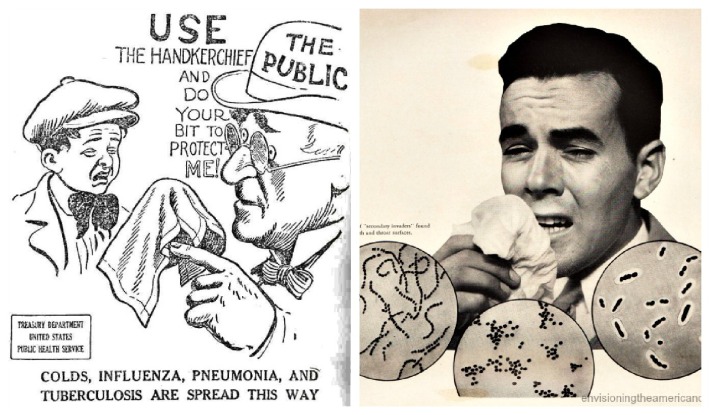 As Nana explained it, “spittle contains many little disease germs and when the spittle dries these little germs are set free, caught by the wind and begin to fly about.”

Fear ran so deep that soiled handkerchiefs were stigmatized as dangerous transmitters of the flu, and people frantically resorted to using pieces of linen in their stead, which were then subsequently burned.

So when the miracle that was Kleenex appeared as an alternative to messy unsanitary hankies it was truly considered life saving. 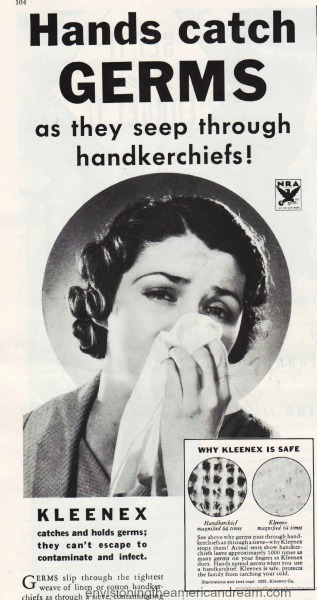 Vintage Kleenex Ad 1933
“As long as that cold hangs on use sanitary disposable Kleenex only! Kleenex, far closer in texture than any handkerchief stops germs holds them fast; keeps fingers dry clean and non infectious.”

“Keep that cold to yourself,” Kleenex pronounced in this 1933 ad.

Because hands catch germs as they seep through handkerchiefs, they could be considered weapons of mass destruction in re-infection

“Germs slip through the tightest weave of linen or cotton handkerchief as though through a sieve, contaminating everything you touch,” warned Kleenex ominously. “And its damp rough handkerchiefs that add so much to the misery of a cold by constant irritation.”

“Kleenex is so much more sanitary,” the ad emphasized. “You use it just once then discard it. Cold germs are discarded too instead of being carried about in an unsanitary handkerchief to reinfect the user and infect others.” 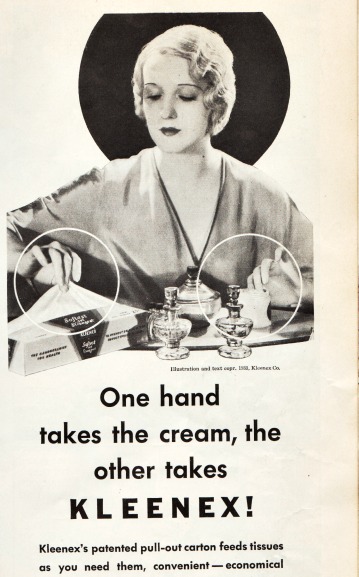 Vintage Kleenex Ad 1930
This modern discovery offered a new way to remove cold cream that was cheaper than spoiling and laundering towels.

But Kleenex’s great contribution to health, my grandmother recalled,  was nearly missed.

When Kleenex was first created in 1924 by The Kimberly Clark Corp. it was originally marketed as a way for m’ lady to remove cold cream.

In 1925 the first Kleenex tissue ad appeared in a magazine showing “the new secret of a pretty skin as used by famous movie stars.”

Young women like my grandmother wanted to emulate beautiful actresses like Helen Hayes who was featured in ads removing make up “the scientific way” using this “modern disposable substitute for a face towel” called Kleenex Kerchiefs.

Vintage Kleenex Ad 1930
“The Kleenex patented pull out carton assures economy. Hands cannot mess up other sheets in the package or take out more than required from the patented serv-a- tissue box.

It was so new a product they needed to explain and instruct  a curious public just what it was.

“Here’s what a Kleenex tissue is like: it’s the size of a handkerchief.  It’s very soft. Every tissue comes from the box immaculately clean and fresh,” they explained.

Even the box itself was proclaimed a marvel of ingenuity and modern design.

“One of the things you will like about Kleenex tissues is the unique patented box they come in. Kleenex tissues are fed out one double sheet at a time! You do not have to hold the box  with one hand while taking tissues with the other.”

The patented  serv-a-tissue pop up box invented by Andrew Olsen was “… cleverly made to hand out automatically through a narrow slit, two tissues at a time ( the correct number for a treatment).”

It was a hit with the public!

Don’t Carry A Cold in Your Pocket

A few years later, the company’s head researcher persuaded the head of advertising to market tissues for colds and hay fever

In 1930 Kleenex re-positioned themselves as the handkerchief you can throw away. “You know what Kleenex tissues are – those dainty tissues that smart and beautiful women are using to remove cold cream.could also be used for hay fever and colds ?”

“Did you know that Kleenex is rapidly replacing handkerchiefs among progressive people? Doctors are recommending it. Nose and throat specialists are using Kleenex in their office.”

Now Kleenex was marketed with the slogan “Don’t Put a Cold in Your Pocket” and its use as a disposable handkerchief replacement was solidified.

The Cold Rush is On

Soon the company was swamped by letters from consumers offering  ideas for all sorts of uses for Kleenex.

Kleenex began running  the suggestions in their ads under the title “Kleenex True Confessions” offering $5 for every story of how they used Kleenex. 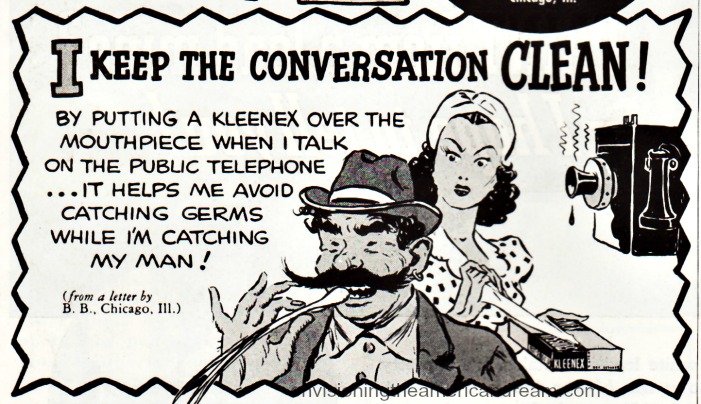 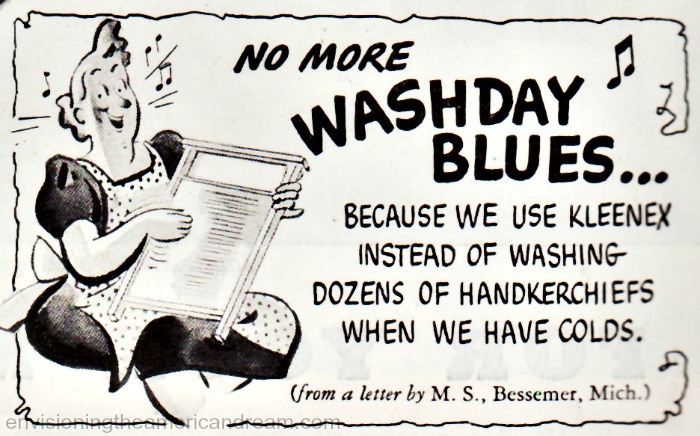 When Kleenex was first introduced they pointed out that they were economical too. Not only it was more hygienic they costs less than laundering handkerchiefs! “Kleenex is a great saving if you have your wash done 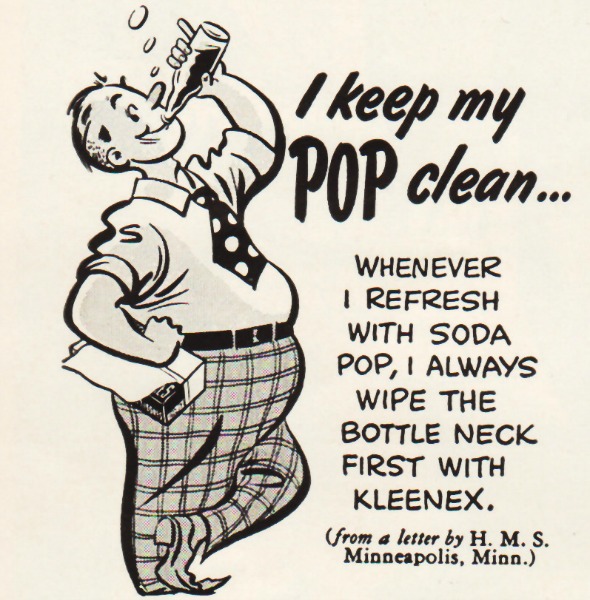 Encouraged to adopt the Kleenex Habit we were encouraged to keep a box of tissues in every room in the house as well as in the car where you could install a special chromium holder to fit under the  glove compartment. 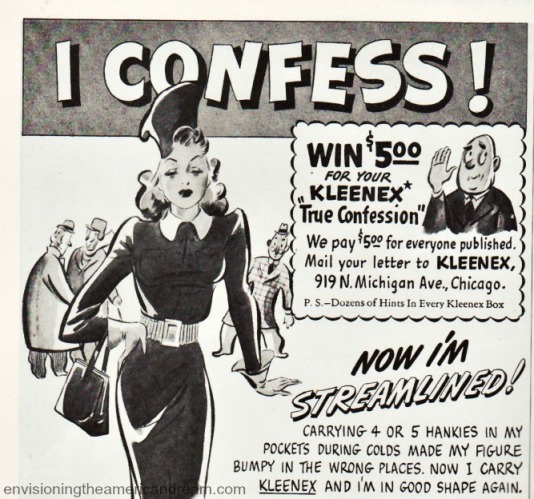 And if health wasn’t an incentive, vanity was. Kleenex promised m’ lady it would  keep her girlish figure.

“Now I’m streamlined,” boasted one young modern. “Carrying four or five hankies in my pocket during colds made my figure bumpy in the wrong places! Now I carry Kleenex and I’m in good shape again!”

Although hankies eventually came back into favor (and Nana, like my mother always carried an ironed and neatly folded hanky in her pocketbook) she would never dream of actually blowing her nose in one.

Dabbing an eye at a three hanky movie maybe, but generally handkerchiefs were rendered inoperable by that king of tissues Kleenex.

The Colds Wars: Nothing to Sneeze at