In My Jewish Home I Grew Up Celebrating Christmas 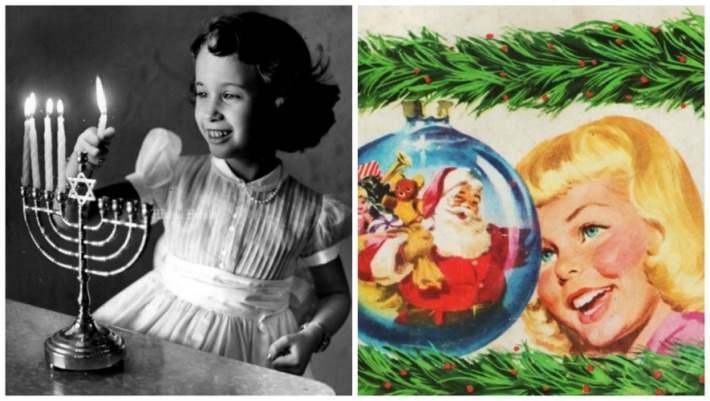 Sometimes it can feel like Hanukkah doesn’t hold a candle to Christmas.

Eight skinny, little Hanukkah candles can’t even begin to compete with vibrating LED Christmas lights pulsating in sequence to the sound of everything from “Let it Snow” to Metallica.

Though taught in the Ten Commandments not to covet thy neighbor’s wife, there was no explicit directive to coveting thy neighbor’s holiday. It is no secret that many American Jews privately covet Christmas.

But I harbor a bigger secret. One that felt shameful for someone who embraces their cherished Jewish traditions. For the first few years of my 1960’s childhood, my parents chose to celebrate Christmas over Hanukkah. Which meant that jolly old Santa made regular stops at the Edelstein home squeezing his corporeal self down our narrow brick chimney to deliver cheerily wrapped presents. Ho, Ho, Ho.

Little photo evidence remains of those early Christmas merriments. Curiously, the few pictures taken of me with the department store Santa suspiciously disappeared years later. In a house of hoarders like my mother, it is noteworthy that no colorful Kodak snapshots of that event exist.  Was evidence destroyed as part of my parent’s plausible denial allowing me to sail through Hebrew school without this taint to my past? Was Jewish Guilt to blame?

However, a recent glance at my well-worn baby book confirmed that the Yuletide holiday was indeed observed. Along with a record of my vaccinations and my very first steps, is a record of “Baby’s Christmas Gifts” diligently written in by my Bnai Brith mother Betty. There is nary a mention of holiday gelt but a single recording of what Santa delivered for my third Christmas. It was a lollapalooza of gifts from a toy gasoline pump to a Ginette Doll. My religious identity was apparently as diverse and inclusive as the list of toys I received.

But for the baby book inscription, no physical trace of my former life as a shiksa exists to this day.

Truthfully, I am not sure this was all kosher with my more observant Jewish mother, and likely the cajoling of my more secular father whose own family was beguiled by Christmas’s charms.

“The miracle of Hanukkah,” my father would say “couldn’t hold a candle to the magic of Christmas.” He didn’t want to deprive his children of this gift-giving extravaganza.

It helped that my paternal grandfather, Papa Moishe was born on December 25th just like Jesus another Jewish boychik.  As the first-born son of Russian immigrant parents, Moishe’s birthday was always a big day of celebration with large family gatherings on Christmas Day. A tradition carried over into my own childhood. Since we all received presents, which Jewish boy’s birthday we were celebrating was always murky.

There is a long history of American Jews celebrating Christmas.

By 1870 Christmas began to slowly change from a religious to a secular national holiday in America. By the turn of the last century, newly arriving immigrants including Eastern European Jews exposed to the yuletide spirit in schools and stores, began celebrating the secularized Christmas as a way of assimilating into the new culture. Hanukkah had long been a minor holiday. With Santa bypassing Jesus as Christmas’s main icon it was easy to slip into the Christmas spirit

According to the Jewish Daily Forward, a large number of new arrivals from Eastern Europe took to the customs of giving Christmas presents. “Who says we haven’t Americanized,” the paper quoted several immigrants as saying in a December 1904 article “The purchase of Christmas gifts is one of the first things that proves one is no longer a greenhorn.”

Gift-giving aside, my parents had their limits when it came to certain Christmas traditions.

Neither a stately Douglas fir with its scented blue-green leaves or a shiny silver Aluminum Xmas tree ever graced our mid-century living room. There would be no sentimental ornaments, no glowing bubble lights, nor silver icicles. The exotic scents of balsam and baking holiday ham were strictly off-limits, as forbidden as Oy- Gevalt a ceramic crèche.

The one lone Christmas decoration often shared space with our menorah. A tall red plastic Jolly St. Nick figurine beamed merrily from the top of the mahogany Emerson TV set. He watched over the proceeding on Christmas Eve as my parents wrapped toys assembling and fumbling with D batteries all through the night as Perry Como and Nat King Cole sang out their Christmas tunes on their RCA hi-fi.

A Nosh For Santa 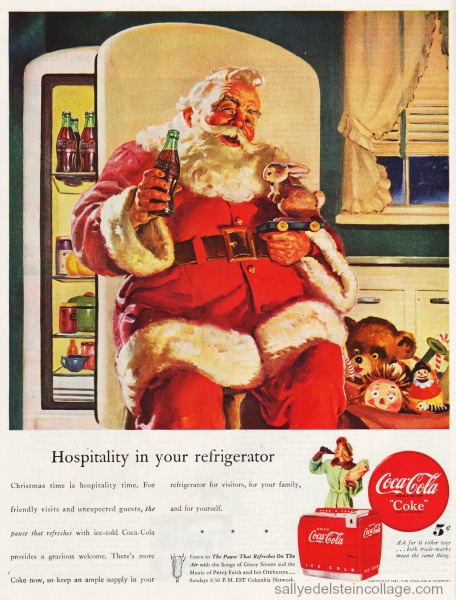 A platter of cookies was always left out for Santa by my mother, anticipating that Santa might need a nosh after all his traveling.  I often wondered whether Santa made a pit stop in our kitchen as he did in the classic Coca-Cola ads. Of course in our refrigerator, Santa wouldn’t find any of the frosty green bottles of Coke which he was accustomed to, but he could pause for a refreshment courtesy of Cotts Cream Soda, or Dr. Brown’s Cel Ray, perhaps stopping to take a nosh of the Hebrew National salami that was always stocked in our Frigidaire

A Visit to SantaLand

Naturally, in order to receive Christmas gifts, a visit to Santa was mandatory. Since Santa Claus was as American an icon as Uncle Sam, my mother saw no harm in it. Plotzing down on a jolly plump man’s lap to request a litany of consumer items seemed as American as apple pie.

The week before Christmas Mom and I would head into N.Y.C. Along with viewing the magical Christmas displays in all the department store windows, we stopped in Best & Company a Department Store on Fifth Avenue to have my hair cut and curled at the tony children’s salon.

I would exit picture-perfect for sitting on Santa’s lap in Macy’s our final destination. My blonde hair and blue eyes belied my Jewish heritage and I fit in seamlessly with other little boys and girls who waited patiently online for their chance to ask for the most sought-after toys likely heard hawked on “The Mickey Mouse Club.”

But my visits to Santa stopped abruptly as did my Christmas celebration once I began grade school and would soon be attending Hebrew school. When it came to Christmas I would be left out in the cold. Perhaps in an effort to solidify my identity as a Jew and dispel any confusion, Hanukkah would forever take prominence in my home.

Latkes replaced Lebkuchen, and the ritualistic holiday mimeograph song sheets brought out every year were now about the Maccabees and not a manger. The gift-giving now stretched out to eight full days which for a child was the real miracle of Hanukkah. 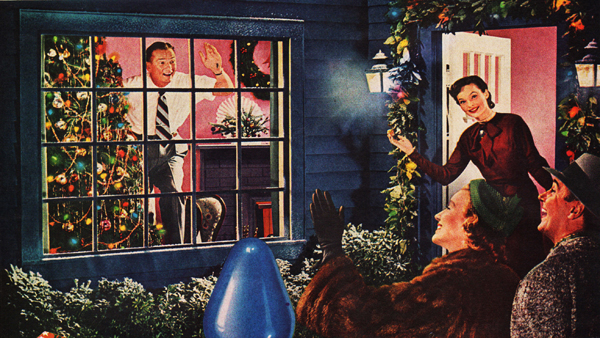 But looking at Christmas decorations remained as much a holiday ritual for me as playing spin the dreidel. We may have had eight days of Hanukkah but they had nearly six weeks of illuminated glory.

No sooner would we finish lighting our Hanukkah candles on our silver-plated menorah than we’d load up in the car to drive around my neighborhood in pursuit of this most Christian display of merriment – a twinkling winter embodiment of the American dream. Suddenly plain, lack-luster split levels were dressed up in their holiday best, each competing with the other for the most dramatic and colorful display of electric Christmas lights. That glittering part of an exclusive world winked at us seductively every holiday season.

As though peeking through a picture window looking in at the Norman Rockwell tableau’s of happy gentile families gaily decorating their Christmas trees with shimmering lights and cherished heirloom ornaments taken out of hibernation, we could enjoy it from the sidelines.

By the time we returned home, our own little holiday candles dripping and drooping in a pool of wax, had forlornly reached the end of their illumination. The flickering reflection of a distant neighbors colorful Christmas lights reflected in our darkened home.

Even now the twinkling Christmas lights like a siren song can still beckon the child in me. Even as I lovingly light my menorah. It is less a competition but an embracing of both festivals of lights. In this year of darkness and division that has never been more important.