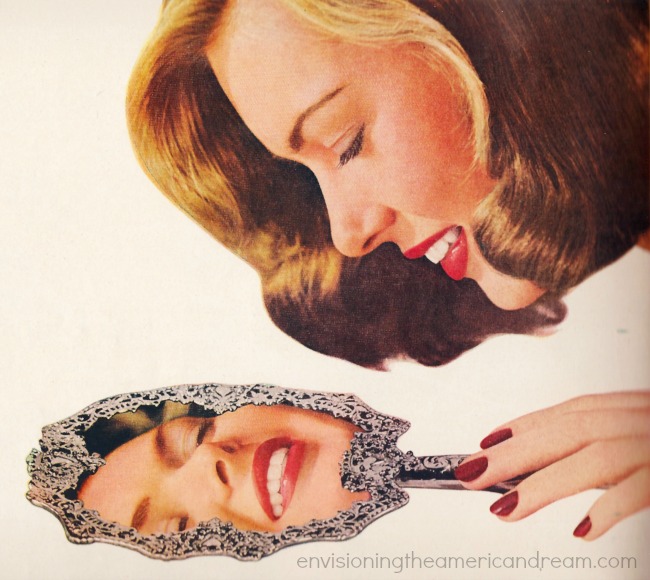 Reflections on Beauty- Mirror, Mirror on the wall who’s the fairest of them all? Vintage ad Pepsodent 1948

Who’s the fairest of them all?

In the great cultural cauldron of 20th century America there was one basic ingredient to being an American Beauty- Caucasian.

Well, apparently that old-fashioned recipe for prejudice is still being used by some.

When Nina Davuluri won the title of Miss America 2014 on Sunday night she set off a flurry of controversy and outrage  as the first Indian American Miss America.

Racist comments crying unfair, littered the internet, setting twitter abuzz with backlash: “With all due respect this is America!” spouted one twitter user.

“This is Miss America…Not Miss Foreign Country!” tweeted another, concerned that the winner was clearly not “fair” enough!”

The remarks would have been right at home at earlier Miss America pageants when non-white women were barred from competing (no African-American woman participated until 1970.) A restriction actually codified in the pageant rules stated “that contestants must be of good health and of the white race.”

Vintage Illustration from Delineator magazine Feb. 1920
Here’s The American Girl
In her component parts, so to speak, our girls are composed of “sugar and spice and everything nice,” done up in racial packages and then exquisitely blended in various combinations by our American life.
In the upper left hand corner, for example, is the daughter of Italy as she comes over here to get into the picture. On her right is the Dutch girl, who began coming over nearly 3 centuries ago; then in order, the French girl, the Irish girl, the Scotch girl, the English girl, the Spanish, the Scandinavian and the Jewish.

In 1920 the year before the Miss America Pageant officially began, the great American melting pot had not spilled over into the antiseptically clean and white popular culture.

A “progressive” article appeared in the February 1920 issue of The  Delineator a popular woman’s magazine, declaring the birth of  A New American Beauty, who was now someone other than…gasp…white Anglo Saxon, and could contain elements of the Irish lass or even a Spanish senorita!

A New Type of Beauty: American

Written by Downing Jacobs, the lengthy article begins with the introduction of a Mrs A Lion Hunter, clearly one of the many Americans who felt  the world was changing too quickly and sighed in relief when handsome dreamy Senator Warren Harding of Ohio was elected President and  promised a return to normalcy.

Our proper lady is meeting with Mr Mann, a world-famous illustrator, presumably the one who illustrated the beauties in the illustration allowing the reader to eavesdrop in on their conversation.

“Mrs. A Lion Hunter, who had been introduced to the famous illustrator, took aim for a pot shot and pulled the trigger,” the article begins.

“Oh Mr Mann”, said she “I am so glad to meet you! I simply adore your stunning American girls. They are so true to life- so typical! You must have a perfectly wonderful model!”

“Oh no,” replied the Famous Illustrator unenthusiastically; “nothing like that. Still Miss O’ Brien is a quiet little worker, and she holds the pose.”

“O’Brien! But that doesn’t sound a bit American!”

“No, she’s not. Her mother was English, or maybe Scotch.  Her father is an Irishman. She was born in Belfast.”

A gasp can be heard audibly as our matron takes in this shocking information.

“Belfast! And do you always use an Irish model when you do an American girl?”

“Oh no, not always,’ The Famous Illustrators eyes twinkled. “I sometimes use Miss Schumacher. Her people came from Alsace, but I think she is partly Scandinavian. She looks as if she had stepped right out of- Holland.”

Mrs Hunter, feeling faint steels herself for what is to follow.

Vintage Illustration from Delineator magazine Feb. 1920
(L-R) The Spanish girl, the Scandinavian and the Jewish girl

“The fact is Mrs. Hunter,” our artist somberly explains, “when an American artist has to do a foreign type, no matter what it may be, Scandinavian, Italian, Czecho-Slovak, Armenian or what not, he can if he wants to, find a model of that nationality waiting at his door, but if he has to do an American girl- well he hasn’t time to page the American girl. He wades right in.”

So it seems, the American artist wades right into that melting pot and gives it a good stir.

“Exactly,” broke in professor High Brow, who had been listening to the conversation  with an amused expression. “it merely goes to show that there is no such thing as an American type.”

“The Famous Illustrator turned towards the professor with a puzzled look.”

“No such thing as an American type?”

“Why no- except the American Indian. The rest of us, barring the Negroes, are pretty much all Europeans, and of comparatively recent importation too. One out of seven Americans was born in a foreign country; another one out of every seven is the offspring of foreign-born parents.”

“Oh yes Professor Brow,” interrupted Mrs. Hunter, with an encouraging glance toward the famous illustrator. “we all admit that we Americans are  dreadfully mixed but isn’t that true of the Spanish too? Yet no one would deny there is a Spanish type.”

Vintage Illustration from Delineator magazine Feb. 1920
(L-R) The daughter of Italy, the Dutch girl, and the French girl

The article  finally gets down to the question at hand describing in detail the ideal American girl who has not varied for  the past 90 years, offering a recipe for a well turned American girl.

“And so we come back to our own American girl. We know she is of European ancestry, and yet, typically she is quite different from all her European cousins.”

“Let us not be misunderstood. When we speak of the American girl we are not speaking of our foreign-born and Americans of foreign parentage.”

“Even in America there are thousands and thousands of representatives of those purely foreign types that we have been discussing. But alongside of these, there is the American girl of purely American parentage or ancestry.”

“Isolated from the foreign types around her, she stands out as distinctly fair rather than dark, and white of skin, though not with the dazzling whiteness of the Scandinavian or the English girl.”

“Her eyes indeed are of a varying hue from blue to brown, but characteristically of a color subdues by gray- rarely of the light blue of the Scandinavian or the steely blue of the Irish girl nor the deep brown or black of the Southern Europeans. Her hair, a hue of brown, with here also minor variations due to varying ancestry, shading from a light brown to dark drown and generally straight or waving.”

“A medium type, a composite type if you will, but still a type- a sort of modified Teutonic, owing much to a basic English stock, re-blended to some extent with Scandinavian or other Teutonic blood, and tempered by a touch of darker, Celtic or Alpine elements, coming perhaps by way of Ireland or the south of Germany.”

Given that not a mention has been made concerning Asian Americans, the article curiously closes with a quote from a gentleman of the Orient.

“Perhaps we rather pin our faith to the words of Wu Ting Fang: “

“When I speak of the American woman, I can not say that there really is a prevailing type. It is a mixture of all types. The American type is a combination of all that is best in the types of the world.”

Yes, as long as that world is European.

Xenophobia, like Miss America is as American as apple pie. Only the nationalities change over time.

How To Avoid the Risk of Offending