Smoking- Just What the Doctor Ordered

RJ Reynolds Tobacco Company ran a long series of ads (R) in which they claimed that according to a nationwide survey “More doctors smoke camels than any other cigarette.” Clearly if doctors are smoking this brand it must be safe (L) Vintage Philip Morris ad touts how gentle their cigarettes are

At least as far as my own baby-bound mother was concerned.

In 1954  it would be a good tens years before the Surgeon General’s landmark report concluded that there was a link between lung cancer and cigarette smoking, so until then my mother blissfully puffed away while pregnant with me.

Besides which, my second time Mom had first hand knowledge on pregnancy. She knew frequent cigarette breaks came in mighty handy to quiet pregnancy jitters.

Two years earlier in 1952 while pregnant with my older brother, my first time mother Betty was a bundle of nerves.

Like many moms-to-be, she had a good case of the impending-mother jitters. Not only could she feel overwhelmed at the thought of being a mother, her head was filled with stories of everything that could go wrong for her and her unborn baby.

But lucky for Betty her obstetrician was there to gently help dispel all her concerns.

In her second trimester, Mom had gone for her usual monthly set of maternal x-rays at the obstetrician office. Before she even had a chance to share her anxieties with the doctor, he  noticed she had a mild cough.

Padding over to his tall steel medical cabinet Dr Orenstein pulled out a pack of Philip Morris cigarettes. Along with tinctures, ointments, and penicillin, the painted cabinet was well stocked with dozens of cigarette cartons, tokens of appreciation  received at medical conventions over the years courtesy of Philip Morris and RJ Reynolds.

Handing her the familiar gold pack, he assured her, “You can kiss your cough goodbye Betty. You’ll soon feel better because you’ll be smoking the cigarette recommended by eminent nose and throat specialists to patients who smoke.”

“You’ll feel better,”  continued the doctor, pausing to light up a Camel for himself, “because in case after case coughs due to smoking disappear, parched throats clear up…that stale smoked out feeling vanishes. Tests showed 3 out of every case of smokers cough cleared on changing to Phillip Morris.”

“And,” he added smiling broadly,  “it was the same brand comedienne Lucille Ball smoked…and a pregnant Lucy at that!” 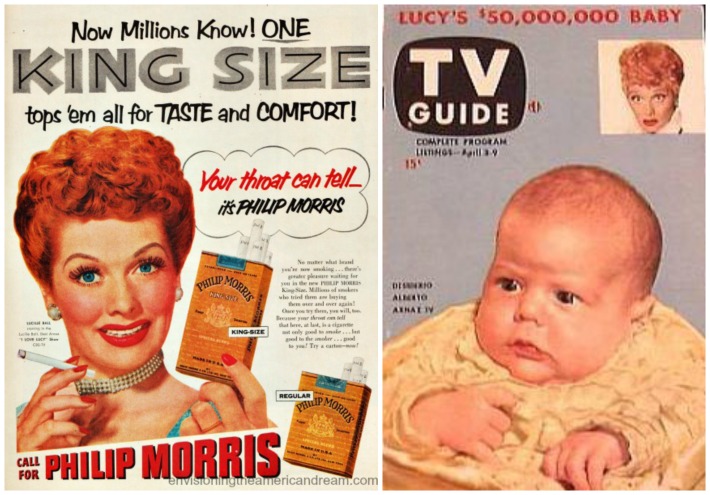 An unprecedented pairing of fictional pregnancy with real life pregnancy occurred on I Love Lucy episode Lucy Goes to the hospital By pure coincidence and good luck the episode dealing with the birth of fictional Little Ricky was scheduled for Jan 19, 1953 which proved to be the day when the actress gave birth to her real son. Desi Arnaz Jr
When the episode premiered 72% of all American homes with TV sets tuned in receiving the higher ratings than the inauguration of President Eisenhower
The news made headlines. By the end of the second season it was Desi Arnaz Jr who graced the cover of the first issue of TV Guide. On Feb 18, 1953 a month after the birth of little Ricky the Arnazes signed a new 2 1/2 year 8 million dollar contract with Philip Morris

The animated titles that opened the show even featured stick figures of Lucy and Desi climbing a giant pack of Philip Morris Cigarettes interacting with Johnny Roventini the diminutive bellboy who for nearly 2 decades had been belting out the Philip Morris slogan “Cal-l-l for Phil-lip Mor-ray-sss!”

Although Mom had been a loyal  Lucky Strike smoker for years, everyone was familiar with the Philip Morris ads that ran for years.

Featuring the four-foot  bellhop who happily made health claims stating that “medical authorities  recognize that  Philip Morris proved less irritating to the smokers nose and throat.”

Promising research conducted by physicians , the ads assured the reader that after prescribing Phillip Morris brand cigarettes to patients with irritated throats “every case of irritation cleared completely or definitely improved”

Chesterfield for example boldly announced the results of a ten month scientific study in one ad: “Nose throat and accessory organs not adversely affected by smoking Chesterfield,” while Camels could claim that “noted throat specialists concluded that not one case of throat irritation was due to smoking Camels.” No mention was made on its effect on the subjects  lungs!

Chesterfield proudly announced the results of their 10 months scientific study- the ” First such report ever published about any cigarette,” they boasted. “A responsible consulting organization has reported the results of a continuing study by a competent medical specialist and his staff on the effects of smoking Chesterfield’s. After 6 months the medical specialist after a thorough examination of the test group stated: “It is my opinion that the ears, nose throat and accessory organs of all participating subjects were not adversely affected in the 6 month period by smoking Chesterfields.”

Opening up the current issue of Journal of the American Medical Association  Dr Orenstein pointed out an advertisement to Mom which  showed a physician writing on a prescription pad: “For your patients with sore throats and cough, Phillip Morris cigarettes.”

Of course buried deep in those same pages of the medical journal, tucked between ads for cigarettes were early reports suggesting a plausible relationship between smoking and lung cancer.

In fact, in May 27 1950 JAMA published the first major study linking smoking to lung cancer and after 1953 the medical journal  would no longer accept adverting from tobacco companies. 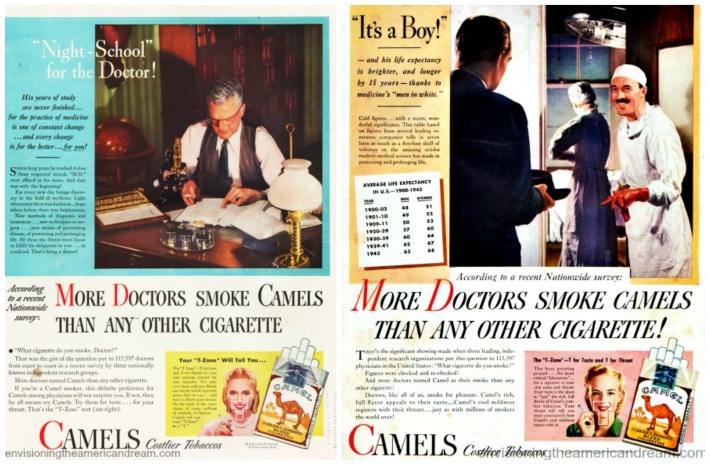 Many doctors still doubted there was a wide spread connection between smoking and disease. Instead it was believed that only certain individuals health was affected by smoking so it was a case by case situation.

Let Up and Light Up!

Besides the benefits to her throat , her doctor stressed out how beneficial cigarettes were for rattled  nerves.

“Don’t be such a brooder Betty,” he smiled at my mother offering a light for her cigarette.  She drew deeply of the fragrant smoke,  the cool mildness of the tobacco tars  a treat to her throat.

“Relax!” the doctor advised.  Modern pregnancy he assured her was a modern miracle. No Fuss no muss.

Gently patting my mother’s hand he tried to calm my fretting mother. “Nowadays pregnancy is a breeze.”

And nothing would help you relax like a soothing  cigarette.

“Cigarettes contain not just one but a combination of medically proven active ingredients to sooth frayed nerves,” explained the doctor.  He promised it would “restore her flow of healthful energy , …a quick and delightful energizing effect!”

“Quit being a worry wort, Betty, ‘laughter,” he said referencing the famous Readers Digest section “was the best medicine’ and smoking was like a doctor’s prescription for relaxation.”

Mom tossed the pack into her purse, and with a new lilt in her walk, happily anticipated the birth of her new baby, and a great tasting new cigarette.

“Let up and light up and laugh,” he advised Mom shooing her out of the office. 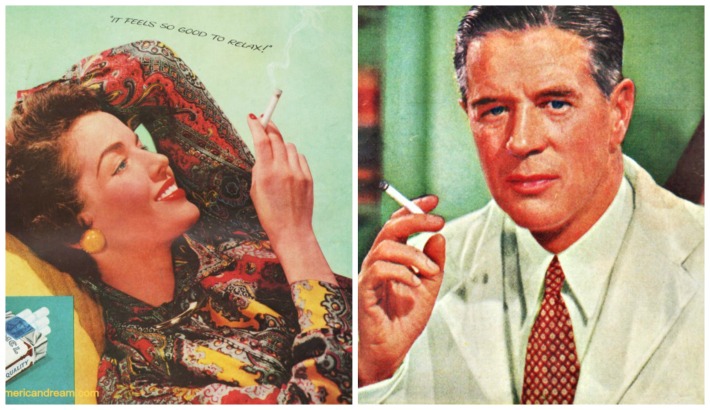 Just what the doctor ordered…It feels so good to relax!

In May, Mom had delivered a whopping 4 pound premature baby boy, and now and now she had her hands full.

This mothering business was tuckering poor Mom out and  she could be dog tired in the evening .That was just one of the many, many times during the day when she wanted to “Let up and light up.”

By December her diaper decorated world kept her too busy for words.

She barely had spare time to flip through a magazine, open a newspaper or even keep up with the news! With so  many new things to learn and discover about one tiny bit of humanity, she said sighing, that there doesn’t seem to be time to catch up with the rest.

But Monday nights at 9pm were  set aside as her half hour of  relaxation all week, when along with 40 million other viewer she looked forward to watching “I Love Lucy.”

With the dinner dishes washed, laundry folded, and baby bottles sterilizing in the electric sterilizer, patiently awaiting refill of tomorrow’s formula, all was finally quiet. Mom could sit back and give my brother his evening feeding. Shaking the baby bottle the milk felt pleasantly warm on Mom’s writs as she settled in with a soothing cigarette, in one hand, baby bottle in the other.

While she waited for Lucy to begin she flipped through the current issue of Reader Digest turning to her favorite features first.  After chuckling at the heartwarming humor of “Life in These United States” and giggling over the gags provided by  “Laughter is the Best Medicine,” a more serious   article caught her attention.

It was anything but laughable.

Nestled between “The real meaning of Xmas’ and “We’re selling America Short” was an article entitled “ Cancer by the Carton.” Ominously linking smoking and lung cancer, it was the first widely read article that brought attention to the public about the dangers of smoking.

Brushing the magazine aside, she looked up at the TV screen just as the familiar stick figures of Lucy and Desi made their weekly climb up  the giant pack of Philip Morris Cigarettes.

Though the widely read Readers Digest article would eventually provoke a  lot of talk, in 1952 my mother  could never imagine a time when  “Life in These United States” would be smoke free.

As if squirreling the article’s information away for a rainy day, Mom let up, lit up and laughed.

It was just what the doctor ordered!

Under the Weather? How About a Smoke?