Beer and the Happy Homemaker

Why was the Happy Homemaker so happy? Beer of Course! Vintage Budweiser ad

Ever wonder what made the mid-century Happy Housewife so happy? It turns out hubby wasn’t the only one knocking back a few brewsky’s at the end of  a long day.

Beer ads traditionally  targeting men  have long featured buxom babes, but there was a time the beer industry pitched a frosty brew directly to the wholesome homemaker.

Long before Budweiser jumped on the femvertising bandwagon using Amy Schumer and feminism to sell beer while discussing the gender wage gap, enlightened beer companies marketed their product to help make the American housewife life a lot happier. And increase their coffers.

Not For Men Only 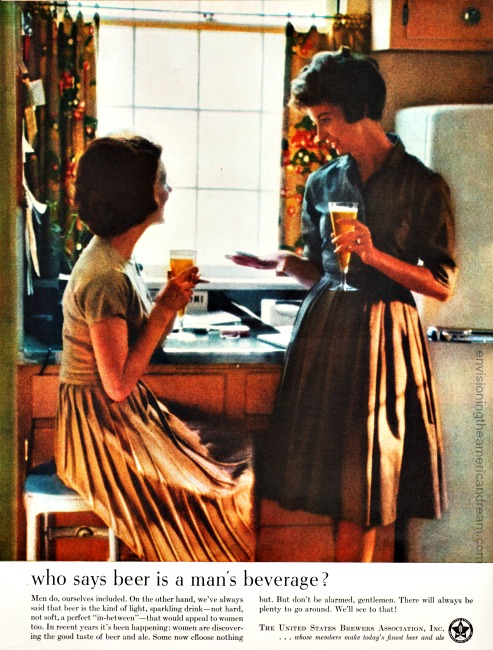 In 1961, as JFK beckoned us all into a New frontier, American Brewers opened their own non sexist frontier welcoming women to enjoy the pleasures of beer.

If  brewers had their way, a cool brew among suburban housewives would become as common as the proverbial kaffee klatch.

“Who says beer is a mans beverage?”

“Men do, ourselves included,” the copy begins.” . On the other hand, we’ve always said that beer is the kind of light sparkling drink- not hard, not soft, a perfect “in between” that would appeal to women too. In recent years its been happening: women are discovering the good taste of beer and ale.”

But don’t be alarmed , gentlemen, the ad says soothing any ruffled feathers that might have caused the big brute to fret, “There will always be plenty to go around. We ll see to that.”

Just as men might worry that a woman might take their job, they could rest assured the woman would be paid less.

Hostess with the Mostess

Ads featured women as consummate wife and hostess carrying out wifely duties fetching a tray of frosty beer  to host a perfect party were the popular them in the series of ads run by the United States Brewers Foundation. This one entitled “St Louis Barbecue on the Terrace” by Douglas Crockwell was #55 in their series Home Life in America

But mid-century women didn’t worry their pretty heads about a gender pay gap because hubby was the sole breadwinner. But serving the right beer could help hubby get that raise

Mr America understood that serving the proper beer to the boss when he came to dinner would mean the difference between a partnership or being stuck in a managerial position for another few years.

By the mid 1950’s , brewers had begun directing their ads squarely at women but not as consumers but more as a service ad, as a way to help them in their important task as gracious hostess and helpful wives.

And really girls, what gal didn’t dream of being the perfect hostess? 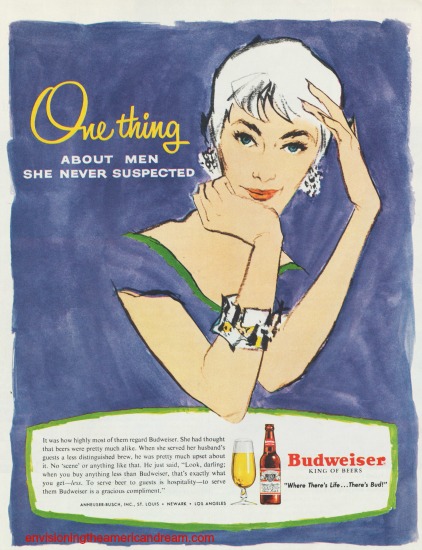 Poor Pam. Everything seemed  set for the perfect dinner party, the rib roast was in the oven, the California dip snappily made, but when her husband Tom looked askance at the beer she was serving her heart sunk. With eyes downcast, she realized she had let Tom down.

She had stayed way too long at the bridge game with the girls and in her haste at the market she had purchased the wrong beer for her dinner party. The beer was on sale, and honestly, what did she know? Beer was her hubby’s domain.

Budweiser would set her straight.

“One thing about Men she never suspected” this ad from 1955 begins.

“It was how highly most of them regarded Budweiser. She had thought that beers were pretty much alike. When she served her husbands guests a less distinguished beer, he was pretty much upset about it. No ‘scene’ or anything like that. He just said: ‘Look darling: when you buy anything less than Budweiser, that’s exactly what you get-less.’ To serve beer to guest is hospitality – to serve them Budweiser, is a gracious compliment.

On the Ball With Budweiser 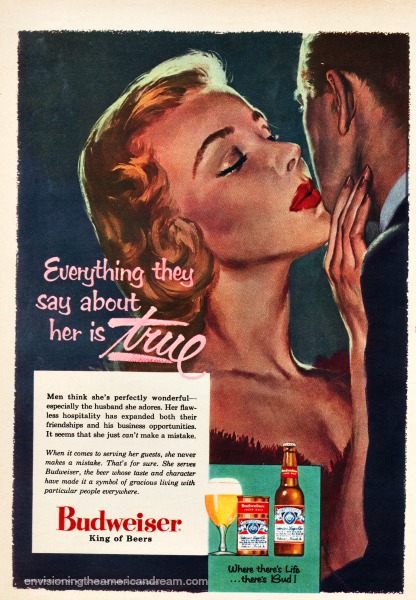 Unlike poor Pam, on-the-ball Babs always served the right beer for her lucky guests. Everything was always in the best of taste with Babs; her buffets were the talk of the neighborhood, her recipes festive, and most importantly, she never made a mistake in which beer to serve. That adoring glance of her husband Hank -the envy of all the gals-  proved it.

“Everything They Say About Her is True” ran the headline  from this Budweiser ad.

“Men think she’s perfectly wonderful – especially the husband she adores. Her flawless hospitality has expanded both their friendships and his business opportunities. It seems that she just can’t make a mistake.
When it comes to serving her guests,she never makes a mistake. That’s for sure. She serves Budweiser the beer whose taste and character have made it the symbols of gracious living with particular people everywhere.

The Real Housewives of the Cold War 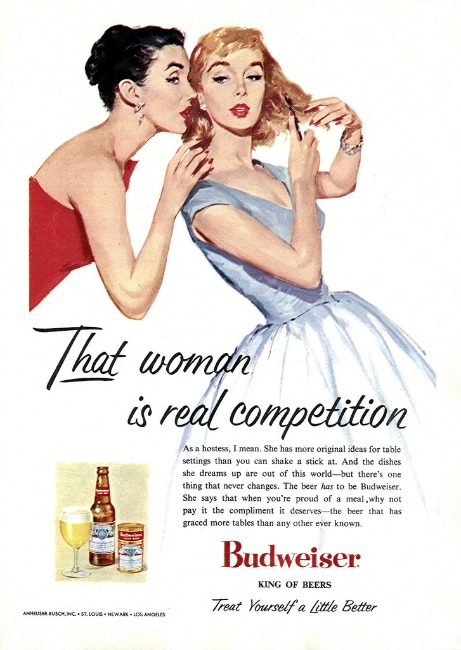 Helen’s eyes were green with envy. “That woman is real competition,” she cattily hissed to her pal Joanne about their gracious host Caro Lee.  Seething with jealousy, Joanna had to agree.  Not only did Carol Lee whip up the best rumaki in town, her cheese balls were to die for.  And she always served the proper beer.

Budweiser’s 1956 advertisement  entitled “That Woman is Real Competition” pits housewife against housewife, like an episode of the Real  Housewives of the Cold War.

As a hostess I mean,” begins the ad copy.”She has more original ides for table settings than you can shake a stick at. And the dishes she dreams up are out of this world- but there’s one thing that never changes. The beer has to be Budweiser. She says that when you’re proud of a meal why not pay it the complement it deserves- the beer has graced more tables than any other beer ever known.

Marriage Advice – Budweiser to the Rescue

Newlywed Marci McKowskie knew her first job as a wife was to make her husband happy preparing meals to make him contented. And if she didn’t learn these husband pleasing tricks  it was her own darn fault. She had only Marci to blame for an unhappy hubby.

She found She Married Two Men, Budweiser reveals in this 1956 ad.

In fact, all women do…there’s always that inner man, you know. And think of all the planning that goes into meals to make him contented!

When you plan, are you fair to yourself? Do you complement your delicious dishes by serving the best beer ever brewed?

ps It’s a fact: Budweiser has delighted more husbands than any brew ever known.

Be a Happier Homemaker

It soon became clear the little lady of the house could benefit from beer too. A whole untapped market awaited the Mad men of Madison avenue and tap it they did.

So go ahead Mrs. Dieter, imbibe with gusto.

“Nearly all beers are lower in calories than they used to be. They’re all starch-free- and none has more than a negligible trace of sugar.

But…if you’re counting up your calorie quota your beer is definitely Ballantine Beer. Independent laboratory tests have shown that it has fewer calories than any other leading beer.

Is it Any Wonder Mrs. Norris Needs Malt?

Like a knight in white armor, beer was ready to come to the frazzled housewife’s rescue.

Between an overbearing husband, ungrateful kids, endless housework and spending her days pleasing other, is it any wonder Mrs America needed something to help her be happy.

Apparently the makers of Malt agreed.

In this 1958 ad from Fro Malt, proud makers of barley malt they understood the difficulties of the modern woman.

“Wife and mother, homemaker and hostess- this taxing pace makes malt in some form so vital to her daily diet. For malt is a source of sparkling energy no matter where its found.”